Mayor of Vladikavkaz aka Karkush

The head of North Ossetia Vyacheslav Bitarov surrounded himself with criminals 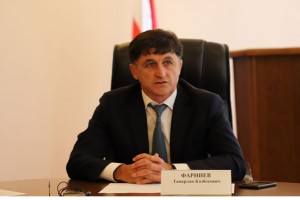 Rucriminal.info continues to acquaint readers with the ruling elite of North Ossetia, which is the closest circle of the head of the republics Vyacheslav Bitarov. We described in detail the path of the owner of the Salyut alcohol company Elbrus Komaev (circled in yellow in the picture) - the closest business partner and just a friend of Bitarov. All his successes were certainly connected with the leader of the killer group Aslan Gagiev (Dzhako). The head of North Ossetia also has another authoritative friend - the mayor of Vladikavkaz Tamerlan Farniev (circled in red in the picture), better known in certain circles as Karkusha. That's what he was nicknamed, because his friends think that Tamerlan is very similar to a crow from the program Good Night Kids. Farniev is the subject of today's investigation. According to sources, after graduating from the Agricultural Institute, Farniev did not go to work, but found other ways of earning himself. In the period 1995-2000, he organized in Beslan dog fights with money rates, as well as “gladiator fights”. The latter involved conscripts from military units nearby Beslan. Then Farniev met Komaev and they began to scroll through individual affairs together. In particular, Farniev and Komaev supplied soldiers and civilians as labor, to work in vegetable gardens and vodka factories.

Karkusha's “starry” hour was the moment when “thief in law” Maharbek Kargaev (Ruslan) drew attention to him and ordered to collect tribute from controlled businessmen. Being able to please Ruslan, Farniev quickly took the place of his “trustee”. So, once Kargaev instructed Karkush to organize a gathering of "thieves in law" in Gudauri (Georgia). On top of Farniev’s career, Ruslan became the guardian of the common fund. In 2005, Kargaev was killed and Karkush, according to sources at Rucriminal.info, started producing “left-handed” fuel from oil stolen by Ingush groups. Fuel was prepared in so-called “samovars” (barrels dug into the ground, under which gas burners were kindled to heat and separate the oil into fractions). Received left counterfeit fuel, Farniev sold without documents at gas stations in North Ossetia.

As the source said, along the way, Farniev could have a hostage business. At least, this was the view of Aslan Gagiev (Dzhako), who somehow nearly interrupted Karkashi’s successful career. In North Ossetia, a businessman was abducted and relatives of the victim decided that Farniev and Marat Urtaev (nickname “Wolf”, the wrestling coach of the State Duma of the Russian Federation from the Republic of North Ossetia Artur Taymazov) could be involved. As a result, an SUV was fired at, in which Wolf and Karkush were riding. The whole car was like a sieve, and Farniev and Urtaev were not even injured. And then the relatives of the abducted turned to Gagiev, who positioned himself as the main fighter with kidnapping. He invited Karkusha and the Wolf to Moscow. Right at the airport, they themselves were seized and taken to the basement in one of the cottages in Khimki, Moscow Region. Gagiev told the captives that they needed to prepare for death. And already the killers were about to execute the sentence, when his good friend Alan, a relative of Karkushi, came to Dzhako. As a result, he hardly persuaded Gagev to keep the captives alive. Moreover, Jaco accepted Karkush and Wolf into the Family (as he called his organized crime group). And since that far, Farniev was in close contact with Gagiev. His transition to power structures took place under the following circumstances.

Once Karkusha met with the former mayor of Vladikavkaz, Sergei Dzantiev, who introduced Farniev to Bitarov. Bitarov was then a deputy of the local parliament and a very close “friend” of Larisa Khabitseva, Chairwoman of the Parliament. This alliance brought Bitarov deputy and ties, and Karkush, instead of criminal prosecution, ended up with a position in the executive branch of the capital of North Ossetia.