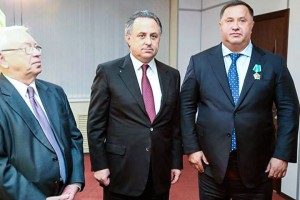 Detained "the thief in the law" Oleg Shishkanov named Siscan may be involved in the mass theft of state land in the Chekhov district of the Moscow region. Testimony on the criminal authority gave a secret witness in the case of another "authoritative person" —Nikolai Pavlinov named Peacock. "On the advice of the leader of the gang Ramensky district shishkanova named Siscan Nicholas Pavlinovo was presented to Julia Ivanova, who was the Deputy head of the Ramensky cadastral chamber of Anne of Khaibullino. For the appointment of Ivanova were allocated money from the criminal common Fund. Anna Khaibullina was a protégé of the Ramenskoye OPG to carry out illegal actions on the territory of the Ramenskoye district in terms of land cadastre," RBC quotes excerpts from the case materials. Leader OPG Nikolay Chekhov Peacocks people versatile. For example, he is the "godfather" of famous boxers Denis Lebedev and Alexander Povetkin. For several years around the case of the Peacock and his personality erupted many scandals. Rucriminal.info I talked to a man who knows from the inside what is happening "around the Peacock." We publish his story in full

"There is a leader Podolsk OPG Sergey Lalkin, he's the Onion, which is kind of like legalized and even, as they say, is personally acquainted with the Governor Andrei Vorobyov. His closest ties in the law enforcement lines (those that appear in our history): Filatov (the Central Agency), Igor Bolloev (ex-Deputy head of the GUVD MO), Stanislav Bolloev (head of internal Affairs of Podolsk). In the sphere of influence of Onion always came in Chekhov district of the Moscow region. Most of the heads of this area were considered his henchmen. Close connection of Onions in the Chekhov district was considered a criminal by the leader of the district Nikolai Peacocks (Kohl, Peacock). However, they are different. In the underworld the Onion is already almost Commerce. And Kohl was considered the right "prestige", which lives exclusively on concepts. Kolya all commercial projects led Oleg Strekalov (Zico). Built on conceptual arrangements, it was considered that the draft Strekalova is proportion of Onion and Igor Bolloev. Strekalov was thinking eventually to leave for permanent residence outside the Russian Federation. So when he is in "white" sold shopping centers "Masquerade" one Bank for 55 million dollars, officially transferred abroad. Onion and Bolloev demanded from him their share from the transaction - $ 3 million. Strekalov not very was agree with such claims. Was then arrested its driver with premium gun Strekalova (from the head of Abkhazia), concocted case on 222 - say, weapons are illegal", - shared his information with rucriminal.info source.

"Realizing that he is about to be accepted and from jail he will have to give more than $ 3 million, Strekalov jumped into the car and fled through Ukraine from Russia. Then the Onion and Bolloev has transferred his claim to the Pavlinov, saying that your man-and you answer. They demanded that he make Strekalov come back and pay. Kohl described Strekalova the situation, but said: "I think you're right, act at their own discretion". He decided not to come back. Onion and Ballew learned about the words Pavlinov and quickly "closed". At the same time began to grab and the former heads of the area, business elite of the area. The onion decided that all they got out of control, "the godfather" don't appreciate, it's time to restore order.

A claim to Strekalova Onion and Bolloev has transferred to the owners of the company "Soyuz Marins Grupp". They were close partners of Strekalov, together they built many cottage settlements and other facilities."

According to the interlocutor Rucriminal.info, "Union Marins Group" was created by former Marines, who then served in the OBEP Nizhny Novgorod region Ilya Kazakov and Alexander Kulikov (died in 2016 in a plane crash). They are also known as ardent Scientology. Their business is estimated at 2-3 billion and includes hotels, including Yalta and Sochi, the Mall, a lot of land plots, etc. Say that the powerful shield they never had, they were covered by their past as Marines and obepovtsev. In particular, Marines always guard their facilities. All problems solve themselves. "Chlenom team "Soyuz Marins Grupp" was and is albert Sarkisyan. He acted as an official: organized meetings in Sochi: model girls and all that. However, in the suburbs all business negotiations were conducted with Ilya Kazakov," the source continues Rucriminal.info ahhh!

"The guys were considered quite tough, they have a number of questionable stories. In particular, in 2004, "Soyuz Marins Grupp" there was a conflict with the head of Chekhovian area Gennady Nedoseka. Soon his corpse was found in the burned-out car. Allegedly Hummer flew into the ditch, some piece of iron struck the gas tank and it caught fire, and Nedoseka why it did not get out. In the cabin, according to eyewitnesses, was his TT with an empty clip. But have done so, if before that drunk shot and left next to the seat. In short, the case is clearly hushed up. Still think Nedoseko killed and some put the blame on "Soyuz Marins Grupp". It was after his death that the company fully developed in the Chekhov district. Sarkisian was charged, in the hope that now with Luchkom and Bolloev just pay. It is clear that there is no longer about 3 million dollars in question, and wishes have increased. The situation is still developing."