Who withdrew $ 21 billion from Russia 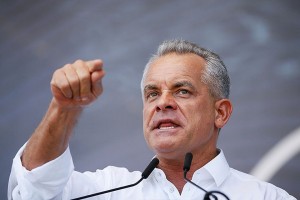 Rucriminal.info, together with the telegram channel of the VChK-OGPU, will publish materials on the most gigantic (by sum) investigation of money laundering and its transit outside the Russian Federation within two days. We are talking about the notorious Landromat. More than $ 21 billion went from Russia through this channel through Russia through Moldova and settled on foreign accounts. At our disposal were the testimony of a key witness in this investigation - the shadow banker Peter Chuvilin. He personally knew all the participants of the “laundry”, knew in detail how it worked. Chuvilin reported all this during interrogation. Verification of his information was fully confirmed. A number of persons named by him have already been arrested, others are put on the wanted list. However, for a significant part of the defendants, work is still underway. Readers of Rucriminal.info and the Cheka-OGPU have the opportunity to get to know all the participants in the laundry. In the first part, we give the first half of the list of persons who organized the laundering and transfer of $ 21 billion from Russia.

“The whole Moldovan withdrawal scheme was organized and led by the following persons: 1. Platon Vyacheslav Nikolaevich, the main developer of the scheme, under his full control was “VS Moldindconbank SA”, he also had a large staff of lawyers who registered foreign companies (non-residents), opened settlement accounts abroad for them, and managed all operations on these accounts controlled financial flows. Also, Platon Vyacheslav met with Russian bankers, whom he proposed to participate in the Moldovan scheme and conduct currency financial transactions through his banks for a certain percentage; 2. Plahotniuc Vladimir (Vlad) Georgievich - Moldovan politician and oligarch, controlled all law enforcement, judicial and financial authorities in Moldova, was the main leader in the "Moldavian scheme" (operations to withdraw funds from the Russian Federation), controlled Platon V.N. ., "Solved" the problematic functioning of this scheme, that is, "covered" all activities for the withdrawal of funds from Russia, receiving a percentage of each transaction

3. Platon Elena Nikolaevna (sister of Platon V.N.) the head of the Treasury of “VS Moldindconbank SA”, managed all financial transactions with Russian banks through a Moldavian bank, controlled all operations for the withdrawal of funds from Russia, was responsible for conducting and accounting for these operations, interacted directly with Russian bakirs and clients of the scheme. In addition, Elena was responsible for the further transfer of the withdrawn funds from Russia to the accounts of non-residents in foreign banks. Elena was the main technical manager of the scheme and Vyacheslav's right hand;

4. Korkin Alexander Gennadievich-equal partner Plato V.N. throughout the “Moldavian scheme”, he attracted Russian bankers to participate in the withdrawal of funds from the Russian Federation, looked for interested persons (customers) who want to withdraw their money abroad. Also, Korkin A.G. was a confidant of V.G. Plahotniuc, represented his interests in Russia, helped to resolve the problems that arise in the functioning of law enforcement agencies and other state institutions, using his extensive connections. Korkin A.G. also received his percentage for his participation in this activity;

Of the Russian bankers (owners, bank managers) who participated in the “Moldovan scheme”, I know the following persons:

1. Vlasov Oleg Leonidovich, closest friend and partner of Platon V.N., he owned the following credit organizations: Bank Baltika, Bank Incredbank (Industrial Credit). Vlasov, through the banks controlled by him, carried out financial transactions with “VS Moldindconbank S.A.” on the withdrawal of funds from Russia; 2. Magin Sergey Gennadievich - until 2013, he was the actual owner of Oksky Bank and Mast-Bank Bank, as well as Intercapital Bank. Could participate in the "Moldavian scheme" from these banks. After Magin S.G. was detained, these banks were sold, approximately in 2013. Magin also owned NPO Energobusiness.

3. Around 2013, Oksky Bank was acquired by Andrei Vladimirovich Sorokin, who was friends with Magin and Platon V.N.

4. Kuzmin Oleg Vladimirovich was the actual owner of the Bank "European Express" and the bank "RegionInvest", maintained good friendly and business relations with Platon V.N., participated in the "Moldovan scheme" from his bank. Initially, Kuzmin was a close partner of Magin. Regioninvest Bank was acquired by O. Kuzmin to cash Platon V.N.

5. Rubinov Dmitry Grigorievich was the actual owner of KB Strategy Bank, maintained close relations with OL Vlasov, previously held the position of head of banking supervision of the Central Bank. Participated in the "Moldavian scheme" from the specified bank. "