Who saves the Arashukovs from new murder charges 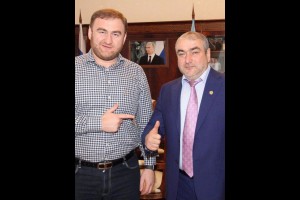 Investigators have stepped up work on the case of yet another contract murder, whose "customers", as suspected by law enforcement agencies, were Raul and Rauf Arashukovs. We are talking about the murder of Ali Afaunov, the bodyguard of the former assistant to the head of the presidential administration of Russia, Nazir Hapsirokov. The performer, Murat Gashokov, is now in custody in Stavropol, a little more and he will speak. However, the Arashukovs remained associates in the prosecutor's office and the Investigative Committee of the Investigative Committee in the Stavropol Territory, thanks to which Gashokov not only does not testify, but also expects to be released. Until recently, the deputy head of the regional SU of the ICR was a close relative of the Arashukovs, Aslan Shekhmurzov. He is now hiding abroad, but communications have been preserved.

According to a law enforcement source, Murat Gashokov was detained in Stavropol on January 30, 2019 - on the same day as the detention of ex-Senator Rauf Arashukov. And this, of course, is no coincidence. The fact that Gashokov was related to the execution of Ali Afaunov operational information has been received for a long time. But the crime was investigated in the KCR, where a whole group of security officials was controlled by Arashukov. For example, Kazbek Bulatov, deputy head of the Directorate of the Investigative Committee for Karachay-Cherkessia, and Timur Betuganov, head of the center for countering extremism of the Ministry of Internal Affairs in Karachay-Cherkessia. Therefore, the disclosure of the murder of Ali Afaunov, the “strings” from which led to the Arashukovs clan, was blocked by all means.

Fearing that after the arrest of Rauf Arashukov, Murat Gashokov might escape, he was handcuffed on the same day as the senator. The official reason for this was that Gashokov had drugs with him. It was no secret for detectives that he indulges in prohibited substances. In the pre-trial detention center, Murat was close to starting to testify about the circumstances of the murder of Ali Afaunov. But then his defenders sent him "greetings" from Rauf Arashukov: the senator asked for "silence", and in exchange promised to arrange for the early release of Gashokov and good material support. And then the law enforcement officers of the Stavropol Territory “spun” related to the Arashukovs. In this region, the entire gas sector has long been controlled by Raul Arashukov, his position in the region has always been strong.

It was possible to fix those who made and are making every effort to ensure that Gashokov was silent and released. In the forefront is now the former deputy chief of the Investigative Committee of the Investigative Committee for the Stavropol Territory Aslan Shekhmurzov, who is a cousin of Rauf Arashukov. A few months after the arrest of the senator Shekhmurzov was dismissed and immediately went outside the Russian Federation. Already from the UAE, Shekhmurzov is making every effort to ensure that Gashokov is released. In this, he is actively helping a close friend, a successor to the post of deputy head of the SU of the SKR Anatoly Demin. It is he who is now in the Administration of the Stavropol Territory is the main hope and support of the Arashukov clan. Among the assistants to the clan is the head of the regional prosecutor’s offices, Ivan Kirichkov.

The Arashukovs still have opportunities to influence the regional supervisory authority. Firstly, these are financial incentives, and the clan still has money in storage. Secondly, members of the clan, primarily Shekhmurzov, have a large amount of incriminating materials on individual prosecutors, including Kirichkov. These factors said that for many years it was the prosecutor's office of the Stavropol Territory that "did not notice" the massive theft of natural gas in large volumes, organized by the proteges of Raul Arashukov in the region. For prosecutors, these factors turned out to be more significant than an illustrative example of the fate of law enforcement officers, associates of the Arashukovs from the KCR. Kazbek Bulatov and Timur Betuganov were arrested and are now in custody.

A relative of Ali Afaunov, seeing how the prosecutor's office of the Stavropol Territory is trying to block the investigation of the case against Murat Gashokov, intends to turn to the Prosecutor General Yuri Chaika and to Russian President Vladimir Putin.

According to eyewitnesses, the following events preceded the killing of Ali Afaunov. Afaunov was a war veteran in Afghanistan and Yugoslavia and at one time worked as an assistant and bodyguard for Raul Arashukov. Then he began to perform similar functions with the "omnipotent" Nadir Hapsirokov. Arashukov Sr. and Hapsirokov were in a rather warm relationship, but then Nazir Raul began to cause irritation. Arashukov Sr. tried not to notice this, and literally every arrival of Khapsirov in Cherkessk met him right on the airfield at the gangway and immediately began to “load” his problems. As a result, Nazir, apparently, asked Afaunov to make it so that, getting off the plane, not see Arashukov, but immediately get into the car and leave.

Afaunov held an explanatory conversation with Raul. But she did not help. Then, as eyewitnesses say, the veteran of the fighting in Afghanistan and Yugoslavia, the Afauns simply, almost raised Raul by the collar and threatened him with serious troubles. Raul, according to witnesses, harbored a mortal resentment, and the murder of Afaunov was beginning to be prepared. And the main character of the upcoming operation was Khamzet Dzhumaev, the current deputy of the KCR Parliament, and then security guard and senior mentor Rauf Arashukova. Khamzet and quite then the young Rauf agreed with the performer in the person of Gashokov.

December 25, 2003 in Cherkessk near the house 1 on the street Green Afaunov was killed. In the car, on which the killer hid, at the wheel there was a man extremely similar to Khamzet Dzhumaev. The latter, of course, is also interested in that Gashokov does not speak and allocates funds for silence.