Who broke the air parade on victory day 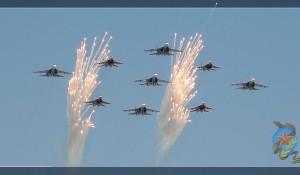 The air part of the victory parade on red square in Moscow on may 9, 2019 was canceled due to adverse weather conditions. The air part usually completes the parade. It was assumed that in honor of the 74th anniversary of the Victory over red square, 74 aircraft will fly at altitudes from 150 to 450 m and at speeds from 200 to 550 km/h. In 2017, the air part of the parade on may 9 was also canceled due to weather conditions. Last year, due to the weather, the air unit did not have a dress rehearsal. At the same time, as noted by the authors of the Telegram channel "Malyuta Skuratov", in 2018 for the provision of services for weather protection of Moscow during the celebrations in Moscow on may 1, victory day, Russia day and the city day was concluded a state contract with a certain ANO "Agency of atmospheric technologies". The contract cost is 406 million rubles. This story interested and Rucriminal.info and found out a number of interesting points. First, the Agency was state-owned, and in 2018 it mysteriously became private. Secondly, despite this, ANO is actually a monopoly on a number of works in Moscow, Crimea and other regions and regularly receives state contracts, and their total amount exceeded 2 billion rubles. While competitors, including the state, give the "shot". Third, these same gosudarstvyennyi competitors claim that the conditions imprisoned solely for equipment ANO. Whereas this technique is very outdated. Fourth, due to obsolete equipment work agentstva actually pointless.

At the end of January 2019, the State institution "Moscow city specialized Department for examination, repair and maintenance of road facilities" concluded another contract for dispersal of clouds during four holidays — may 1, victory Day, Russia Day and the city Day this year. The technical task requires the use of at least ten aircraft to spray the appropriate reagents. The amount of the contract was 406 million rubles, regardless of the weather, which will fall on these days. The contract went to the Autonomous non-profit organization "Agency of atmospheric technologies", which for some reason received this contract out of competition. Which is not surprising. ANO wins these kokori from year to year, and the total amount of government contracts received, she is now (including these 406 million) - 2.2 billion ruble. At the same time, in fact, ANO is only an intermediary that rents equipment from other enterprises. However, one would not be surprised, because to create ANO had a direct bearing on Roshydromet and the Russian (then JSC) "chpo of V. I. Chapaeva"- "daughter" of Rostekh. Well, the state shifts budget money from one pocket to another.

However, Rucriminal.info I found that since September 28, 2018, all state structures dropped out of the Academy of Sciences co-founders, and its owners were two persons - a former employee of Roshydromet Viktor Korneev and his partner in various patents Andrey Chastukhin. However, it would be possible to "close your eyes", maybe people have developed and created something unique.

However, the final doubt that we are dealing with another fact of corruption, disappear after reviewing the appeal to the FAS of a large state structure - fgbi "Central aerological Observatory". From the document, which has Rucriminal.info that to the Moscow contests the clouds to disperse is not allowed sestructure with a unique technique, in the budget that invested a huge amount. This is done by drawing up the conditions of competition for a very specific technique, which just uses ANO. Moreover, according to the fsbi, this technique is so outdated that the payment for the services of ANO is throwing money "to the wind". The Agency is not able to break with bad weather.

We publish excerpts from the appeal of the fsbi.  "The description of the object of Zaku�PKI should not include requirements or instructions in respect of trademarks, service marks, trade names of patents....requirements for goods, information, works, services, provided that such requirements or instructions entail a limit on the number of bidders. Agreed to paragraph 3.1 of the terms of Reference: the Number of planned aircraft: ten aircraft with a flight duration of at least 4 hours, having a practical ceiling of at least 7000 m, a payload of at least 5 tons, opening during the flight ramp for the discharge of bulk reagents and equipped with secondary radar systems...

According to the Temporary regulations of carrying out works on improvement of weather conditions in the city of Moscow dated 12 October 2018 r. No. 01-01-14-246/18 approved DZHKKH of Moscow, such a requirement to the aircraft, as the presence of opening in-flight and ramp for discharge of bulk reagents is missing.

Yak-42 "Roshydromet" also does not have an opening during the flight ramp for the discharge of bulk reagents, but can perform work on the regulation of precipitation, much better and more efficient.

Based on the requirements of the customer set in the terms of reference, to perform flights, fit only two types of aircraft, namely the An-26 and An - 12.

The aircraft meteo-laboratory Yak-42 "Roshydromet" is equipped with the world's most modern set of equipment for measuring all the parameters of the atmosphere and clouds necessary for qualified decision-making on the effects to regulate precipitation....

Currently, there is only one laboratory aircraft in the Russian Federation where the necessary methodological flights have been completed and all the amendments have been determined - this is the Yak-42D Roshydromet flying laboratory.

Temporarily created laboratories on the basis of an-26 and An-12 aircraft and application of these laboratories in works on regulation of precipitation including improvement of weather conditions over Megacities, do not meet the necessary requirements for the aircraft laboratories that is convincingly demonstrated in works on weather protection on June 12-13 and September 8, 2018.

The presented results show that the temporarily established laboratory on the basis of the An-26 aircraft gives absolutely unreliable data on the state of the atmosphere.

So the position of the zero isotherm according to the laboratory An-26, almost a kilometer different from the measured data of upper-air sensing. An-26 gives dramatically underreporting of humidity. The use of such data will result in the wrong choice of reagent for exposure. The erroneous determination of the zero isotherm position will lead to the fact that ice-forming and refrigerants will be discharged where they will not work. As a result, such effects will be useless, and the cost of their delivery (aviation costs) including the cost of the reagents themselves will be simply "thrown to the wind."...

Preferential conditions for participation in the auction have been created, since participants who have an-26 and An-12 aircraft in their fleet can take part in the auction and perform works in accordance with the technical task, and participants who have a Yak-42 "Roshydromet" and Il-18, An-30, Yak-40, M-101T "Gzhel" in their fleet, although they can perform all works in accordance with the technical task, but for far-fetched reasons, namely, "all aircraft must have an opening ramp for the release of bulk reagents», technically not suitable for vipolnenia works meteosite.

We believe that the violations of the current legislation committed by the Customer infringe the rights and legitimate interests of the applicant as a participant of the purchase, and do not allow the participant to correctly form his application for participation in the open tender," the document says Rucriminal.info ahhh!

And everything happened, as promised fgbi - the money paid for the dispersal of clouds on may 9, were "thrown to the wind." However, the organizers of the contest, all ustrivaet. Why this happens and what other secrets lie behind ANO "Agency of atmospheric technologies" Rucriminal.info he'll tell you soon.