Who for the weekend at the cottage, and Pozdyshev - in Monaco Rucriminal.info publishes the third part of a large investigation on the Deputy Chairman of the Central Bank of the Russian Federation Vasily Pozdyshev.

Listing all the banks that Pozdyshev and his team members provide cover is a long business. Their list is huge: who makes one-time offerings, someone sits on a monthly fee. There are also special favorites. For example, the Genebank of times when its owner was Evgeny Dvoskin - the main and permanent shadow banker of Russia. Dvoskin Pozdyshev was embraced by another deputy chairman of the Central Bank of the Russian Federation Dmitry Tulin, who has known the ex-owner of the Genebank since the 90s. Dvoskin does not forget his benefactors. For example, according to Rucriminal.info sources, he presented Pozdyshev luxury apartments in Monaco, worth more than 4 million euros. Dvoskin himself does not really need them, since he is not traveling from Russia and anywhere in the world he can be detained at the request of the FBI. The last time he was detained was just in Monaco. 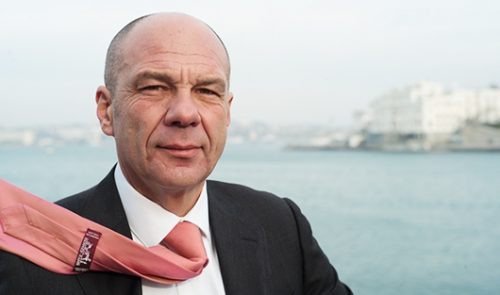 Vasily was happy with the present and often attends the new thing. In general, it is surprising when Vasily finds time to work in the Central Bank of the Russian Federation, since a significant part of his life consists of relaxing abroad. If ordinary mortals go to the country for the weekend, then the deputy chairman of the Central Bank of the Russian Federation Pozdyshev flies to Nice for the weekend.

Take for example 2017. December 30, 2016 Vasily Pozdyshev flew from Moscow to Nice (from which Monaco with apartments for 4 million euros is a stone's throw away), and returned to the capital on January 9. A week later, on January 15, Pozdyshev flew for a couple of days to relax in Dubai. Having cleared the banking sector for less than a month, Vasily again went to Dubai on February 12, where he stayed until February 18. After that, he visited Moscow for a day, and on February 19, Sunday, went to his native Paris, where he spent one day. February 20, Vasily has already returned to the capital. On February 28, the deputy chairman of the Central Bank of the Russian Federation flew to Zurich, from where he returned on March 3. Then came a painful month at work, and on April 5, Pozdyshev went to Germany. He flew from Malta on April 8th. On April 24, Vasily flew to Israel, and returned two days later, but from Zurich. Finally, the long-awaited May holidays came, and on May 6, on Saturday, the deputy chairman of the Central Bank of the Russian Federation went to his favorite Dubai. He stayed there until May 14, and then popped into Moscow for two weeks. On May 30, Pozdyshev again packed his bags to be sent to Paris, and returned from the French capital on June 3. On June 13, he flew to Stockholm for three days. And on June 19 he again left for Paris, where, recall, he has real estate, friends, business, etc. This time, Vasily stayed in France for a week, until June 25. 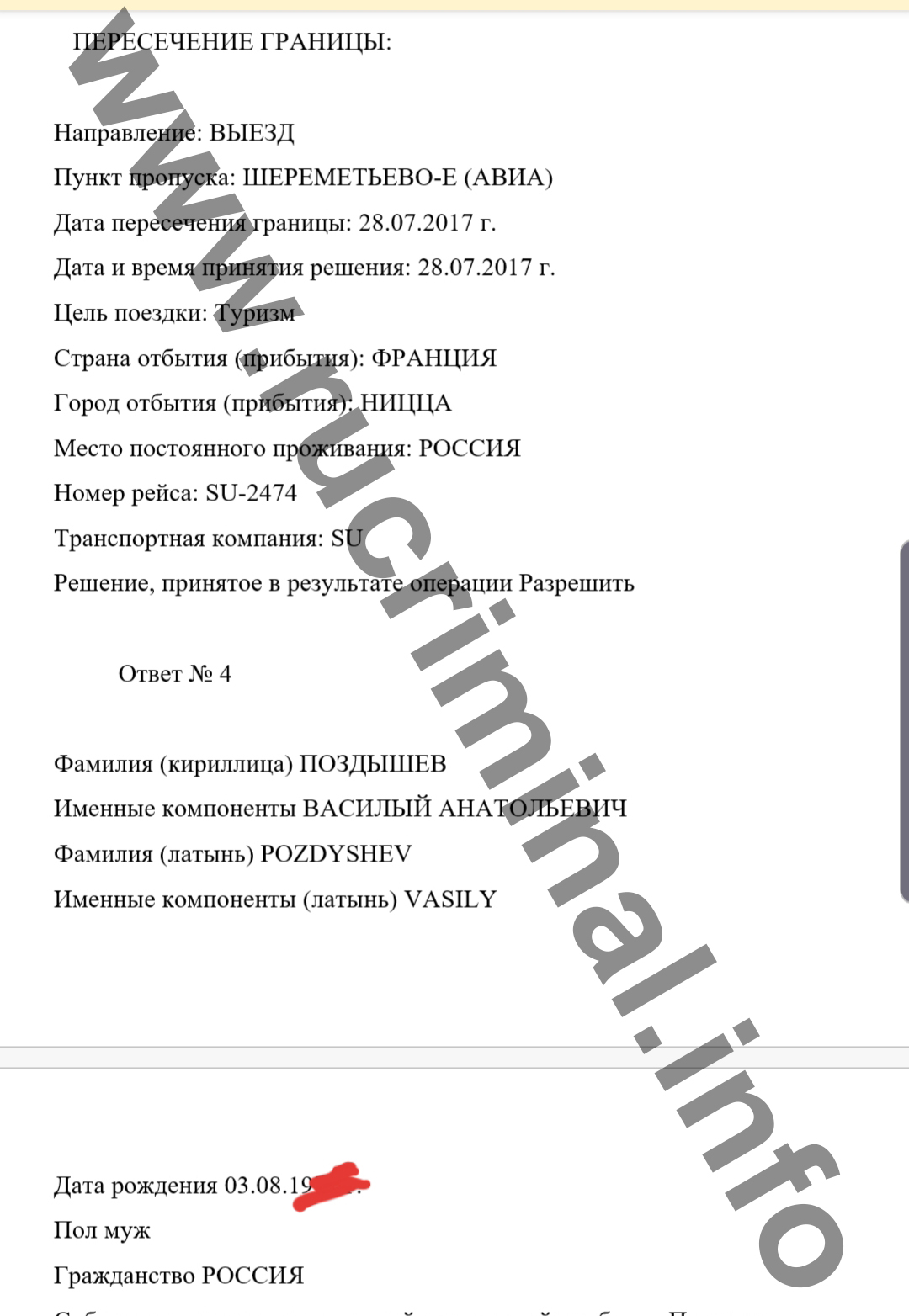 According to Rucriminal.info, July was especially interesting at Pozdyshev when the situation around the Ugra bank unfolded. Vasily obviously had something to celebrate, because all this month he went to Nice every weekend. So, on July 14, the deputy chairman of the Central Bank of the Russian Federation left for this resort city, and returned on July 16. On July 21, Friday, a plane with Pozdyshev on board headed for Tunisia. But in the end, Vasily was in the same Nice, where he returned on Sunday, July 23. This week turned out to be “hot” for the deputy chairman of the Central Bank of the Russian Federation - the Prosecutor General’s Office decided to talk to them about his actions regarding the Yugra bank. Pozdyshev did not want to talk, and on July 28 he again flew to Nice, where he decided to stay. Moreover, on August 3, he has a birthday. In apartments for 4 million euros is much better than in a small office on a wooden chair in front of the prosecutor asking uncomfortable questions.

Actually, now we can move on to the main problem of Pozdyshev recently - the bank "Ugra". To do this, we will have to go back to his work at EcoLive SA and EcoLive LTD. Recall that the owners of these two companies were Dmitry Kotenko, Anatoly Goncharov and Alexander Rudik. Pozdyshev became extremely close to Kotenko.

And then Pozdyshev through Kotenko formed a tight connection with Rosneft. Goncharov and Rudik were also the founders of Region. In 2011, they sold this investment company to management (it is believed that Kotenko and Pozdyshev began to control it). And about the same time, Region acquired the portfolio portfolio management company from Rosneft. And in 2016, Rosneft gave the Far Eastern Bank in the same hands. In addition, the Region owns about 12% of the shares of RRDB (Rosneft Bank).

The current financial director of Rosneft, Peter Lazarev, before his appointment to the oil company, was the owner of the Energo-Alliance and Georesurs firms. In 2011, the owner of these enterprises was a subsidiary of the Region investment company. The latter cooperates with Rosneft - since 2012, it has been controlling the pension fund of a state company.

In late 2012 - early 2013, Energy Alliance and Georesurs came under the control of the Oil and Gas Industrial Company (NPK), whose sole owner is the same Dmitry Kotenko, friend and business partner of Vasily Pozdyshev. NPK in September 2012 was included in the database of potential suppliers of Rosneft. The NPK division, NPK Engineering, renders services to Rosneft's daughter, Neftepromleasing.

That is, the financial connection of Pozdyshev-Kotenko-Rosneft is clearly visible.

Now let's turn to the affairs of the oil company. Absolutely all experts agree that at the moment, the “hole” in Rosneft’s balance sheet is around $ 3 billion. It needs to be “plugged” with something, and there aren’t so many relevant assets left on the Russian oil market that weren’t seized “ Rosneft. " And all these assets belong to persons who also own prominent banks, most often not directly, but through intermediaries. 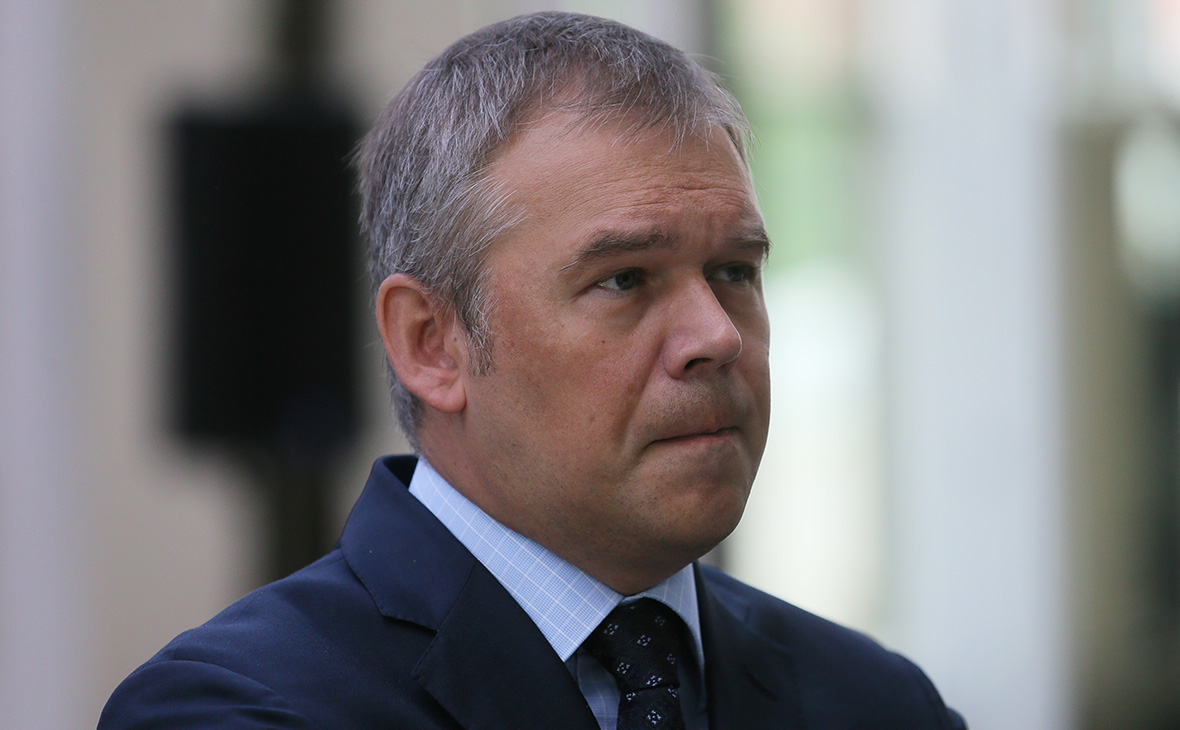 And then a bunch of Pozdyshev-Kotenko-Rosneft begins to work. The first, together with the Central Bank of the Russian Federation under specious pretexts, and if they do not work, then with the help of threats (remember, Basel introduced with the help of Pozdyshev), forces owners to officially recognize the ownership of the bank. Further, the bank crashes checks, accompanied by leaks in the media, and one by one they begin to draw financial "holes" that are constantly growing. The final "hole" must certainly be huge so that the owner can no longer "plug" it, and its size will allow it to "squeeze" other assets from it. Yes, that same oil industry. And then the license is revoked from the bank, claims for subsidiary liability are brought forward against the owner who has recognized possession, allowing him to withdraw his assets. Then they will move, as it is not difficult to guess, to Rosneft.

Here you can recall the story of the brainchild of Musa Bazhaev by Finprombank, whose reverse side Pozdyshev knew very well even before coming to work in the Central Bank of the Russian Federation. It is known that Bazhaev sold his oil assets in 2014 to the former head of Rosneft, Eduard Khudaynatov, who is considered the man of Igor Sechin. However, there is persistent talk in the market that Rosneft’s deal did not like it at all. It was either considered that they overpaid, or it turned out that Bazhaev "held" part of the oil assets.

Following this, the situation repeats with Ugra Bank, whose owner Alexey Khotin owns a number of oil assets. Khotin is convinced to admit ownership of the bank, followed by drawing the Central Bank of the Russian Federation a financial hole. Khotin repeatedly recapitalizes the bank, but he still has his license revoked.

Next in line was Mikhail Gutseriev, who owns oil assets.