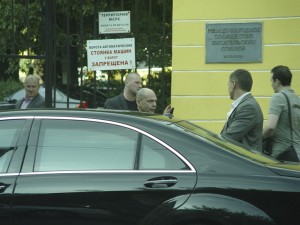 The "hole" in Genbank, which belonged to Evgeni Dvoskin, was several times higher than previously thought. According to Rucriminal.com, it is at least 80 billion rubles. That's the amount of funds that Dvoskin withdrew from the credit institution under the aegis of "help to the Crimea." As a result, over his head more "clouds are gathering".

As Rucriminal.com told several well-informed sources in the banking sector, when in August 2017 the Central Bank carried out the sanation of Genbank, changed the administration of the financial institution and introduced a new investor - Sobinbank ("daughter" of Bank Rossiya) - all of course suspected that in the "brainchild" Dvoskin there is a "hole". According to initial estimates, it amounted to 15 billion rubles, on both that in the Central Bank of Russia and in the bank "Russia" were ready to "close eyes". So to say, the fee for the Crimea. Recall that Dvoskin is one of the few bankers who "ventured" to start working in the Crimea (and that he was afraid of sanctions if he was already wanted by Interpol) and opened branches of his Genbank on the peninsula. For such courage, you can forgive the 15 billion rubles withdrawn from the bank.

However, recently representatives of Bank Rossiya completed the revision of Genbank and "grabbed their heads". It turned out that the financial "hole" in Dvoskin's brainchild was many times greater. It is 80 billion rubles. This is too much even for "payment for the Crimea." As a result, the Central Bank and the "Russia" are now discussing a further action plan for Dvoskin. On the idea, of course, there is really nothing to think about. There must be a criminal case and a landing. But Dvoskin has been at large for many years due to his powerful connections.

Earlier Dvoskin's reliable "rear" were deputy head of the Russian Interior Ministry's DEB Andrey Khvorev and deputy head of the FSKN Nikolai Aulov. The first went away with a huge scandal: criminal cases, allegations of corruption. Do you think it "drowned"? Not at all. According to Rucriminal.com, at first Horev settled into the business empire of the brothers Boris and Arkady Rotenberg. He was in charge of the safety of their alcohol business, then he performed special assignments in Mosoblbank, which sanified the SMP Bank of Rothenberg. Since 2014, Khorev has been a member of the board of directors of Eurasian JSC - a structure on whose owners "there is nowhere to put a brand". No less "enchanting" went and Aulov-Spain transferred to Interpol materials for his search for links with the Tambov OPG and "money laundering". But he also did not disappear and found himself a sweet place.

When Horev and Aulov "left the race," Dvoskin had other patrons. So, a member of the board of directors of Genbank is a close friend of Dvoskin's lawyer Vershinin Alexander Vladimirovich. He is also known as a good friend of the former chief of the CSS of the Federal Security Service Oleg Feoktistov. At the same time Vershinin defended the former head of the Ministry of Economic Development Alexei Ulyukaev, whom Feoktistov planted. Among the clients of the lawyer is ex-head of the CSS of the Russian Federation, Mikhail Maksimenko. All these VIP friends and clients do not prevent Vershinin from defending the top of the mafia, for example, the "thief in law" Yuri Pichugin (Pichuga)

Actually, thanks to these connections, Dvoskin not only did not yet sit down, but has the opportunity to engage in banking business. After all, a person with such a biography to the banks on the "cannon shot" can not be allowed.

Rucriminal.com publishes extracts and one certificate of special services, where Dwoskin is mentioned.

In 2007, during a search at Dvoskin, a combat pistol was found and seized. Photo from the expert conclusion of the ECC "Ministry of Justice" on weapons found in Dvoskin EV

Examinations No. 7546 dated October 9, 2007, the Russian Ministry of Internal Affairs and the Ministry of Justice of the Russian Federation, established that the Mauser K-96 pistol with the numerical designation "48775" is a combat, firearm.

Cartridges of 7.62 mm, found in Dvoskin EV, are suitable for shooting from Mauser (7.63 mm), which was confirmed by experts in the course of shooting them from this weapon (Mauser K-96).

Despite this, he was not brought to criminal liability.

05.12.2007 Dvoskinym E.V. who is under the tutelage of the GU MVD of Russia in the Central Federal District (Aulov NN), will be implicated in another criminal situation.

On an operational vehicle of the Ministry of Internal Affairs of Russia for the Central Federal District (disguised as an ambulance), Dvoskin with unidentified persons will come to the Intelfinance Bank, where he will break the head of the bank chairman, after which the latter will go to Sklifosovsky, and the bank will wash more than 12 billion rubles. Part of

07.12.2007 all passports of the citizen of Ukraine Dvoskin EV will be annulled by the FMS of Russia, but the patrons will not arrest him, although in addition to the criminal case no. 169277, a warrant for his arrest from the NCB of Interpol - the Red Corner will come to this person. He was in search of the FBI (USA) since 2000, the US court issued an order, his name before the illegal legalization in the territory of the Russian Federation was Slusker.

05/29/2008 Citizen Dvoskin EV the nickname "Zhenya fat", despite the fact that all his passports have been canceled, bypassing the sentry's posted on him, will fly from Vnukovo-2 to Nice (France).

09.06.2008 information about the departure of this person will be transferred by the official bodies of the Russian Federation to the law enforcement agencies of Spain and the FBI (USA). He will be detained in Monaco and placed under arrest.

Dwoskin will not be extradited to the FBI (USA), so his lawyers will submit knowingly false information to the court of Monaco.