Spain believes that the "authorities" Rabinovich and Zhirnokleev behind the shooting of "thieves in ... 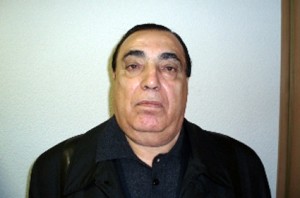 Spain believes that the "authorities" Rabinovich and Zhirnokleev behind the shooting of "thieves in law" Japonchik, Scythian and Ded Hasan

Rucriminal.com continues to publish collected by the Spanish secret services, materials in relation to the leaders of the Taganka criminal group Zhirnokleeva Igor and Grigory Rabinovich. According to the results of this work to the "authorities" in the Russian Federation it can be prosecuted.

Submissions were received in the course of the investigation against former junior partner "Tagansky" Alexander Romanov, who this spring was convicted in Palma de Mayor ka to three years and nine months in prison. From the materials against Romanov identified thousands of pages of documents. These documents, and arrived in the Russian Federation. Rucriminal.com publishes another "portion" of materials. They are talking about the "bloody listed" Tagansky: lists the numerous murders committed on the instructions of group leaders. Among the victims are called "thieves in law" Vyacheslav Ivankov (Japonchik), Andrey Golubev (Skif), Aslan Usoyan (Ded Hasan).

About corruption and organized crime

DIVISION of the Balearic Islands

A.- (By way of introduction)

The defendant Alexander Romanov (1), held in custody with 11-12-13, has a criminal record in Russia, supports the "Taganskaya" close ties with the Russian criminal organization.

The above accused, together with his family (wife and mother-in-law) to organize appropriate mechanisms to entering the territory of Spain cash in the amount exceeding 14 million euros (12.3 million euros and 2.6 million dollars), derived from the above-described criminal organization. And thus, in order to enable their use and possession in Spain under the guise of funds obtained legally.

Thus, the testimony of the other defendants were taken in Spain, who, exercising their profession (lawyers and managers) to facilitate the Romanovs (1) in the implementation of their plans.

Also in Spain ROMANOV (1) and his family, together with other persons (employees, managers, friends) under their management to criminal activity for personal gain. This activity included the mechanisms aimed at restricting the rights of company employees, as well as the issuance of falsified documentation and access to official confidential information.

Criminal organization "Taganskaya" acts in the Moscow region since the nineties.

Its existence is recognized at international level, law enforcement and intelligence agencies (Europol, FBI etc), as well as recognition of the fact that Igor ZHIRNOKLEEV is one of its main leaders.

The criminal activities of the organization include: raider attacks, fraud in the banking sector, extortion, organization and execution of contract killings.

Under raider raids meant assigning companies Enforced or fraudulently. These forms include a wide variety of mechanisms and illegal tactics, among which should be noted: the use of violent methods, identity theft, tampering, bribery, intimidation and physical, including murder. In some cases, the organization initiates a process in which the company artificially forced to declare bankruptcy and then forced them to sell at a very low price.

In many cases it is a combination of different tactics that require the participation of lawyers, corrupt officials and law enforcement officers, economists and other professionals to facilitate the award of companies and the development of the illegal business.

After taking control of the companies, sometimes criminal organization devastated their assets and took possession of their property, and then left the company data, while in other cases, it kept the company under its control.

The estimated number of members of a criminal gang "Taganskaya" is more than 50 people. The organization is charged with the organization of the following murders:

- One of the leaders of organized crime A. Selvyana (nicknamed "Selva").

Among the most important for this crime cases in which notes the presence of the organization "Taganskaya" should be listed:

In all these cases, "Taganskaya" gained control and ownership of the above-mentioned companies.

a. - Igor ZHIRNOKLEEV, date of birth 12/29/1957, is the leader of the criminal organization, which is the most active in the Moscow region, and has broad interests in various business sectors. The organization participated in the "raider raids" on some companies in Moscow and used violent methods against its competitors, in connection with which a sufficient number of members usually carry guns.

The main office of the majority of their controlled companies located in Moscow and connected with a criminal organization by the company "GSK" (General Investment Company), which is itself a shareholder ZHIRNOKLEEV and other companies Rabinovich.

b. - GREGORY LEONIDOVICH Rabinovich, date of birth 05/08/1956, is an active and important member of the criminal organization "Tagansky". He is under investigation in connection with the commission of economic crimes for the organization. At the very least, was a participant in three criminal cases:

- In 2000, the Police Department of St. Petersburg tax control opened a criminal case against the above-mentioned persons in connection with tax evasion.

- In 2005, the Police Department of Moscow has opened a criminal case against the above persons on charges of fraud.

- Was the suspect on charges of money laundering in the United States after the implementation of the financial transactions for the deceased mafia boss Vyacheslav Ivankov.

Rabinovich is a companion Igor ZHIRNOKLEEVA, and both participated in the planning of the murder of Frank Newman in 2005.

As Igor ZHIRNOKLEEV and Grigory Rabinovich and Vladimir Greeks were involved in the raider attacks on STORE Moscow in 2005.

He participated in the establishment of the company "Capital Department stores" associated with Vladimir Grekov.

Rabinovich tried to get control of the company "Vodkas ROSPIRTPROM" at a time when Romanov took over "Crystal".

at. - TEMURLANG MUKADASOVICH BATRIDINOV, date of birth 12/01/1956, is an active member of a criminal organization "Taganskaya" and is engaged in large-scale fraudulent transactions using front companies.

BATRIDINOV also served as director of the company "GIC", used by the organization "Taganskaya" and maintained relations with the Romanov during the raider attack on the company "Crystal".

His signature as CEO of "Afghan" companies featured on the company agreements concluded with AI Romanov and BG Vinogradov in proceedings against Moscow department store.

"Monolith" He is also the Director General of the security company.

The Ministry of Internal Affairs of the Russian Federation, in conjunction with other sources of information, lists, as a whole, 26 companies under the control of "Taganskaya" criminal organization, indicating the importance and scale of the corporate network, established in the said country. The criminal activities of these companies, primarily focused on the implementation of raider attacks on other companies, and to provide the infrastructure that guarantees the possibility of location, they provide diversification benefits of an economic nature, resulting in the criminal activities in order to money laundering and to ensure visibility of their legitimacy.

Of these companies should be noted the company, with links to facts connected with Romanov and his family. These are the following companies:

Other companies have a variety of items of activities ranging from trading metals and precious stones before the sale of furniture and decoration objects, insurance companies and oil companies. Among them can be noted:

The first three of the above persons (ZHIRNOKLEEV, Rabinovich and BATRIDINOV) maintain direct communication with the company GIC (General Investment Company), which, as mentioned, is one of the companies used "Taganka" in its operations.