In the history of the criminal adventures of Anatoly Bykov, there are moments that seem to lie on the surface, but no one notices them. One of these stories is associated with cottages in Ovinnoye (an elite area on the outskirts of Krasnoyarsk). More details in the third part of the investigation by rucriminal.info.

In 1992, Bykov began construction of six huge brown brick houses in the style of New Russian mansions. Terrible kitsch even at that time. Six cottages in a row, around a common wall and barbed wire. There is information that even the towers were built around the perimeter. The first owners are Bykov's personal circle, those same “Predmostovskie” - in addition to Tolya himself, Inin, Naumov and Demoev. Two more - the leaders of the criminal brigades "Kolchak" and "Kisa" (Styazhov), who were lied down by Bykov (both actually did not live there, and soon their houses were given to other "Bykovskys"). But it’s not even about what they built. Then, in the boom of private construction, they sculpted and not like that. Much more interesting was the situation with the owners. And there are a lot of interesting things here. House No. 32 Originally belonged to A. Inin. After his disappearance (presumably killed by his own people in August 1994), the house is inherited by S. Ismayilov (Celentano). That is, he lives in the house of a friend, in whose murder he is most likely involved. Officially, the house passed to him only in 1996. It's funny that it was transmitted according to the personal statement of Inin, whom no one has seen alive for more than two years. And Ismayilov (Celentano) himself was at that time in the United States (where Bykov hid him, after the savage murders of the son of the deputy head of the Main Directorate of the Internal Affairs Directorate for the Krasnoyarsk Territory, Pugachev, and the journalist of Segodnyaya Gazeta Alferyev, who wrote the truth about the Bykovskys in December 1995 - they will be beaten with special cruelty). Ismayilov himself will not be the official owner for long. In early September 1996, he disobeyed Bykov and returned to Krasnoyarsk, and on September 17 of the same year he disappeared (according to operational data, he was killed by his own people). The story of the house does not stop there. In October 1996, for a month already, the missing "Celentano" entrusted his house to another bandit from the Bykov's group, a certain Alekseev. A year and a half later, in April 1998, the missing Celentano resurfaces. This time, a certificate of commissioning of a residential building is issued in his name. A year later, in March 1999, "Celentano" sells the house to Maryasov (to another bandit from Bykov's entourage). Of course, no "Celentano" makes a deal. He has long been dug in by his own "friends". Bykov is distributing house # 32 as a trophy. The entire cottage complex behind the fortress wall on Ovinny is one large hostel, where houses (or places) are handed out for serving the chief. Such is the "hostel on the blood." By the way, the name of Ismayilov (Celentano) will pop up one more time. In August 2008 (12 years after his disappearance) Ismayilov S.D. issued a power of attorney to a certain Khodos D.O. to represent his interests on the issues of the said house. The power of attorney was certified by a notary from Nazarovo. The file contains a copy of the passport of a citizen of the USSR, SD Ismayilov, certified by the seal of the Ministry of Justice of the Russian Federation with the inscription: "Verified with the original, signature." Interestingly, the notary saw a living Ismayilov or a ghost? The house was sold the same year. No less interesting are the stories of other houses from the "Bykovskaya hostel" in Owinniy. House No. 28 after "Kolchak" passes to Gleb Voitenko. To the brother of the same Kirill Voitenko, who was killed in 1994. House No. 30 after the "Kitty" passed in 1996 to Pasha Tsvetomuzyka (Vilor Struganov). After his "spat" and a high-profile showdown with Bykov in 1999, the house "unexpectedly" finds itself in the hands of another bandit - Merkulov (a native of Nazarovo, from Bykov's personal circle, later he will replace him as the Boxing Federation). In 2006, already sitting behind bars, Pasha-Tsvetomuzyka will try to sue this house for himself, but Merkulov wins in court and leaves the house behind him. This is the only owner of the houses built on Owynne, where the Bykovskie owner has survived since the 1990s. In 1999, after Bykov escapes abroad and all Bykov's houses are arrested there, they will also be arrested as built with funds obtained by criminal means. And all Bykov's entourage, who had survived by that time, would also run away. It is surprising that everything that Bykov built for himself or his entourage gives off some kind of smell. Bloody plot on Ovinny, a complex on Lesnaya street, a palace in Crimea ...

For example, the land on the street. Lesnoy in Krasnoyarsk, where Bykov lived before his arrest in 2020, was generally intended for the construction of a hotel complex for receiving foreign specialists. How did she end up with Bykov? Yes, as usual, with the help of various murky schemes. Knowledgeable people say that on the street. Lesnoy in Krasnoyarsk Bykov erected buildings, but did not register them as built - so you do not have to pay taxes. But that is another story… 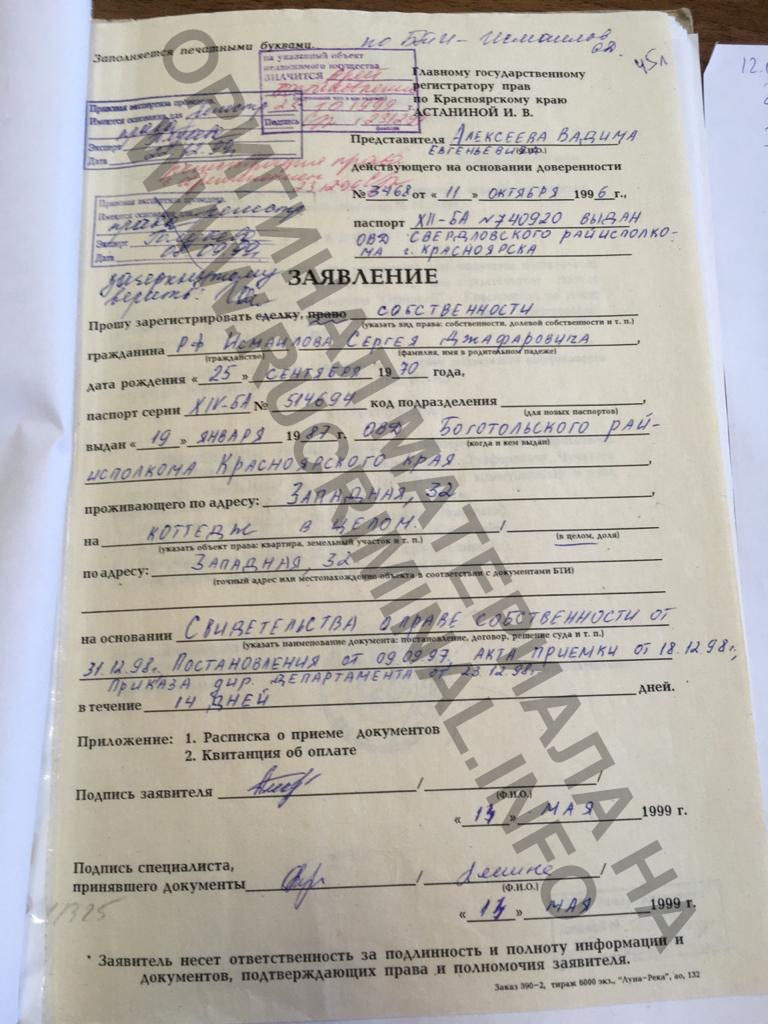