Vodka tycoon Elbrus Komaev, which Rucriminal.info spoke about in connection with an investigation into the activities of Aslan Gagiev’s gang (Dzhako), turned out to be one of the “gray cardinals” of North Ossetia. Sources told how Komaev built his career and was at the top of the alcohol business. It turned out that this path is literally littered with corpses. In publications we will talk in detail about this friend of Aslan Gagiev and a close friend, business partner of the head of North Ossetia, Vyacheslav Bitarov. 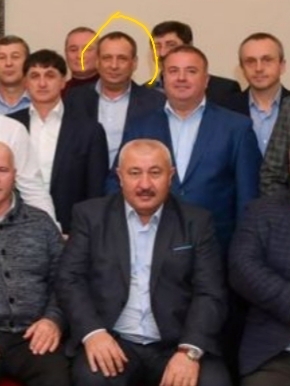 Formally, Elbrus Komaev (circled in yellow in the photo) is the owner of the Salyut plant. However, sources at Rucriminal.info say that Salute is not only a vodka factory. This is a whole factory from the following industries: an alcohol factory, a champagne factory, a wine factory, low alcohol drinks, vodka, etc. Without Komaev, who has strong support at the federal level, not a single issue in the field of alcohol in North Ossetia is resolved. It is Komaev who has been the number one alcoholic solver in Ossetia since 2014. “If someone wants to work on the alcohol line, he must pay him a percentage, otherwise either the local security forces will come or the federal ones. Depending on the steepness of the object. Or maybe Rosalkogol pick up the license, ”the source said.

In his opinion, all the successes of Komaev are suspiciously associated with many deaths. Here is just a small list of them.

Komaev began a serious career in the vodka business with the post of commercial director of the Salyut factory, which was owned by an influential businessman Oleg Gioev. The latter spent most of his time in Moscow, trusting Komaev. And then I discovered that the plant was on the verge of ruin. Gioev conducted an audit showing that the lion's share of the profits had been stolen. In April 2007, an unpleasant conversation took place between the Gioevs and Komaev, during which the first broke the second head. A week later, a scooter exploded at the entrance of Gioev, he died. It later turned out that the bomb was planted by killers of Aslan Gagiev (Dzhako), with whom Komaev had converged by then. After the death of Gioev, “Salute” was bankrupt and during the bidding it was bought by Komaev. The co-owner of the plant was Jaco. During the investigation of the Gioev’s bombing, one of the members of the operational-investigative group was closely engaged in Komaev. He initiated the interrogation of Komaev. And then he held an informal meeting with Elbrus and soon after she mysteriously died.

Even before that, the appraiser Golosnoy also died in a strange way. And right after the auction, at which Komaev got the plant. Here it must be added that Gagiev was able to handle poisonous substances and poisons professionally ...

No less strange way did the bailiff who organized the auction of Salyut’s property also disappear. At the end of a successful operation in favor of Komaev and Gagiev, the bailiff quit, left for Moscow, where he planned to buy an apartment. And disappeared.

Killer Gagiev killed the former director of the Salut factory Vadim Dzhioev (at the exit from the Regah restaurant). He had ambitions to bid on the redemption of the assets of the Salyut plant. He built it in due time together with the father of Oleg Gioev. They were friends and relatives.

To this we can add that the investigators are now checking interesting information. At one time, a certain Elbrus asked Gagiev to kill S.L. and the head of the department of MUR Andreev. It seemed to this Elbrus that these employees were too close to him. Elbrus and Jaco discussed the possibility of eliminating employees with the help of an explosion. Fortunately, they never realized their plan.