FSB believes that mafia showdowns in the judiciary Rucriminal.info became aware of the simply fantastic development of the story with the investigation against the judge of the Arbitration Court of Moscow (ASGM) Elena Kondrat and her son Nikolai Kondrat (his father is ex-Deputy Prosecutor General Ivan Kondrat). Elena Kondrat herself is suspected of bribing her former assistant, and now the LRA judge Elena Makhlkina. Nikolay, in turn, is in custody on charges that he "ordered" the murder of his driver Kirill Igitkhanyan. 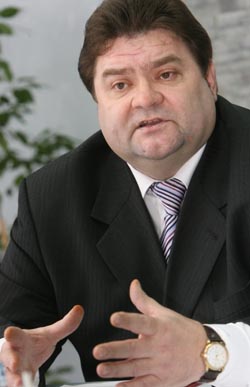 Sources said that the investigation and the operatives are not going to stop only on this accusation. Currently, the Main Investigative Directorate of the Investigative Committee of the Ministry of Defense of the Moscow region has received materials on another potential episode that may be incriminated to Nikolai. Allegedly, he was preparing for the attempted murder of Judge Makhalkina, who turned out to be an agent of the FSB of the Russian Federation and was a participant in an operational experiment in relation to his mother Elena Kondrat. According to the FSB, it turns out that morals in the spirit of the Sicilian mafia reign in the judiciary, only that "Colombian ties" and "cement shoes" Themis' servants do not do each other, and that is not a fact.

According to the interlocutor of Rucriminal.info, in order for Nikolai Kondrat himself to become compliant and begin to admit guilt, the investigation prepared a "surprise" for him. Unexpectedly, a meeting with a woman much older than the 20-year-old student of Moscow State University Nicolas was allowed, with whom he had only met for 1.5 months and did not feel any special feelings. And this despite the fact that for 8 months the investigation has denied the young man a meeting with his parents. Suspecting something was wrong, Nikolai refused the "surprise".

Recall, according to the data of the Main Investigative Directorate of the Investigative Committee of the Moscow Region, on October 2, 2020, Nikolai Kondrat's Toyota Camry car was stopped by traffic police officers on Kutuzovsky Prospekt. His driver Kirill Igitkhanyan was driving. He showed the police an investigator's identity card and a special “non-check” coupon, allowing the holder of such a document to avoid checks on the roads.

The identity card and the coupon raised doubts among the police about the authenticity, on this basis Kirill Igitkhanyan was detained and taken to the Dorogomilovskiy OVD.

Nikolay Kondrat was disturbed by the detention of the driver with a "fake" certificate. To prevent the driver from telling his parents about this, the guy decided to get rid of him, says a source of Izvestia in law enforcement agencies. He instructed the iconic Nikita Matsnev to carry out his plans, promising a "generous" fee - 80 thousand rubles.

According to the investigation, Nikolai Kondrat passed a hunting knife to Nikita Matsnev through a taxi driver and wrote a message to Kirill, making an appointment in a remote place - in a ravine in the Lukhovitsky district of the Moscow region - supposedly to discuss what had happened. Nikita Matsnev attracted his friend Gennady Voskresensky to the case. Together, they met the unsuspecting driver at the designated location the day after the arrest incident, October 3. During the meeting, a fight broke out, the man received several knife wounds, from which he died.

On December 21, 2020, Nikolai Kondrat was arrested on suspicion of organizing the murder of Kirill Igitkhanyan.

Sources of Rucriminal.info, close to the Kondrat family, note that the evidence base on Nikolai is based on the testimony of N.A. Matsnev, who entered into a pre-trial agreement with the investigation on February 17, 2021. According to the Code of Criminal Procedure of the Russian Federation, when concluding a pre-trial agreement, a case against a person who has entered into such an agreement is separated into a separate proceeding and considered in a simplified manner with a verdict. Those. when considering a case in which Matsnev N.A. concluded a pre-trial agreement with the investigation, the court will not consider and delve into the details of the crime committed by NA Matsnev.

At the same time, this verdict will be of a prejudicial nature for the persons against whom Matsnev N.A. gave evidence - Kondrat N.I. and Voskresensky G.D.

“There is information that operational officers have information about the commission of Matsnev N.A. over the course of several years, a number of murders on the territory of Russia. According to the lawyer who represented the interests of one of the suspects, one of the witnesses to the murders previously committed by N.A. Matsnev. is currently hiding on the territory of Ukraine, her name and surname, according to the lawyer, is known to the operatives, - the interlocutor of Rucriminal.info expressed the opinion, - But, fulfilling someone's order, they force Matsnev N.A. to testify against Kondrat N.AND. and blackmail Matsnev N.A. the fact that if he does not stipulate

NI Kondrat, they will send him for the murders he had committed earlier, as well as car theft, etc. ”.

According to the source, after the conclusion of the deal with the investigation (February 17, 2021), Matsnev N.A. already in March 2021, he personally wrote a statement to the investigator and to the Internal Security Directorate of the Main Directorate of the Ministry of Internal Affairs of Russia for the Ministry of Defense about his (Matsneva N.A.) beating and torture. In the statement, he described in detail how he was beaten, an electric current was passed through him and asked to be checked upon his appeal. But the investigator not only did not conduct a check, but did not even attach the statements of N.A. Matsnev. in the investigation. Probably having “forgotten” about these statements in any verification materials, which he concealed from the prosecutor and intends to conceal from the court.

“And the“ curators ”of the investigator Babushkin A.The. for his such compliance, he was promoted to the post - transferred from the Investigation Department in Kolomna immediately to the Central Asia TFR of Russia, though to the personnel department, "- said the interlocutor of Rucriminal.info. He connects the events that happened with Nikolay, with the position of his mother, Judge Elena Kondrat, in a number of cases and unwillingness to voluntarily resign, as the chairman of the LRA Novikova N.A. demanded from her, who enjoys the unlimited support and trust of V.M. Lebedev.

“I would like to believe that the first deputy head of the Presidential Administration of the Russian Federation, S.V. Kirienko. after all, he will sort out Novikov and stop defending and shielding him in every possible way, ”the source says.

Recall that the VKKS on July 12 considered the submission of the head of the TFR Alexander Bastyrkin and agreed to initiate a criminal case against the judge of the Moscow Arbitration Court Elena Kondrat on the grounds of a crime provided for in part 4 of Article 291.1 of the Criminal Code of the Russian Federation ("Mediation in bribery on an especially large scale") ... According to the Investigative Committee of the Russian Federation and the FSB in Moscow and the region, Kondrat transferred $ 50,000 to her former assistant, and now also the judge of the LRA, Elena Makhlkina, for making the decision of the necessary businessman. According to the operatives, Kondrat transferred money to Makhalkina for making a decision not to bring to subsidiary liability a number of individuals and legal entities, namely: United Standard LLC, its founders SI Soloveichik. and Shendrik V.G., accountant and financial director of LLC "USTS" Kostash O.A. and Pankova A.V., LLC "TransStroyMekhanizatsiya", as well as on bringing to subsidiary liability the former directors of LLC "USTS" Vershinin A.N., Seoev A.M., Laptev A.I., Pleskonos S.A. and Sakuna B.V.

Kondrat herself insists that she transferred money to the former assistant Makhalkina at her own request, since she did not have enough to buy an apartment and became a victim of a provocation. At the same time, Kondrat cited a recording of her conversation with Makhalkina, in which she admits that in 2020 the cattle were detained by the FSB while receiving money from the manager A.V. Goloshumova. ... In a personal conversation with Kondrat E.N. 04/27/2021 (recordings of the conversation are available), E.A. Makhalkina. said that she was caught red-handed, there are her fingerprints and for 10 years she must cooperate.

Already continuing to be under the control of the FSB, Makhalkina E.A. became a participant in an operational experiment in the case of the fixer Ullubiy Medzhidov. In December 2020, Majidov was detained.