Who else "bury" Bank " Soviet»

Traces of it lead to Igor Zuev and Sergei Kelbach 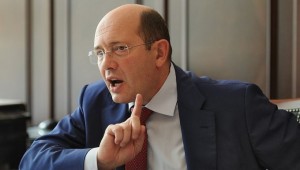 Lawyers shadow banker Vladimir Antonov appealed the verdict of the Vyborg district court of St. Petersburg. According to him Antonov was found guilty of fraud with 150 million rubles. Bank "Soviet" and received two and a half years. At the same time, the St. Petersburg city court released from custody former Board member of the Bank "Soviet" Kirill Laskin. He is already accused of stealing from the "Soviet" 2 billion rubles. In total, within the framework of this investigation, 12 people were taken into custody - former members of the Board of the Bank "Soviet" Laskin and Pavel Izyumov, as well as representatives of commercial organizations. The Tver court of Moscow issued a warrant in absentia arrest of Stanislav Mitrushina, former Chairman of the Board of Directors of Bank "Soviet", which after three years of rehabilitation, the Central Bank revoked the license. As found out Rucriminal.info, all this " pawns "in the management system of the Bank" Soviet", and therefore the theft of huge sums from it.  The real owners of the scandalous Bank were Sergey bezhanov, his boss-former adviser to the head of the state company "Avtodor" Igor Zuev. And from them "strings" are drawn to the former head of the "Avtodor" Sergey Kelbah.

According to investigators, billions of rubles from the Bank were withdrawn by lending to fictitious structures associated with the former owners and top managers of the credit institution. The main withdrawal of assets occurred in 2015-before the decision on the reorganization of the "Soviet". The same partners have stolen about 2.2 billion through a fully controlled OOO "Collector 19". To do this, the Bank "Soviet" and the organization signed a contract of assignment of rights of claim under loan agreements.

However, Cyril Laskin, and Pavel Izyumov, and S. Mitroshin was only operational issues associated with "Soviet", but no strategic decisions are not taken. They were the managers who carried out orders of real owners of "Soviet". Sources Rucriminal.info they said that the banking market has never been a secret-all the Affairs in the Bank ran a shady businessman Sergei bezhanov. In addition to the activities of the "Soviet", bezhanov led all the schemes of the Bank for the "transit" of large funds outside Russia, cashing large sums, etc.. He also organized the work of a large collection company LLC " Collector 19 "and microfinance organization, acting in conjunction with the"Soviet".

Whose money went abroad and "cashed" via "Soviet" and Bezhanova? This can be understood from the personality of Bezhanov's boss. Bezhanov has long been considered a man of Igor Nikolaevich Zuev. Everyone knew the latter as the unspoken owner of the "Soviet" and the person who controls the financial flows through the Bank.

A native of the state security bodies Igor Zuev in 2000 was appointed chief bailiff of St. Petersburg, then Deputy head of the Main Department of justice for St. Petersburg and the Leningrad region. In the period 2000-2004 he was a member of the St. Petersburg election Commission, with the right to vote (Chairman of the control audit service of the election Commission). In 2007-2011, he was Deputy chief of staff of the Central election Commission of the Russian Federation-head of the CEC civil service and personnel Department (Moscow). In 2011-2012 he was Deputy Chairman Of the government of Sverdlovsk region-permanent representative Of the Governor of Sverdlovsk region under the President of the Russian Federation.

Igor Zuev is a close friend of the former head of Avtodor Sergei Kelbach.

According to sources Rucriminal.info when formed a bunch of Kelbach-Zuev-bezhanov-Bank "Soviet", this Bank flowed funds "Avtodor". In the beginning there was opened the official account associated with the company. And then there was a huge flow of, so to speak, informal funds.

According to our sources, the money associated with "Avtodor" for a long time "laundered" through the "Soviet". Then, it became noticeable. Questions began to arise to the management of Avtodor. Had to quickly "sweep" the trail. Zuev lost his post in the state company, and the" Soviet "began to"burn". Along the way, withdrawing from the Bank all the funds. First managed to agree with the Central Bank on rehabilitation. But then the Bank of Russia decided to deal with the" Soviet " on the hard. It is noteworthy that the intensification of investigations into the theft from the Bank "Soviet" coincided with the resignation of Kelbach from the post of head of "Avtodor", which took place in February 2019.