A truly unique document fell into the hands of Rucriminal.info journalists. This is the decision of the Kislovodsk city court, which is forbidden to distribute and quote in the RF in any way: the report of the FBI on the organized criminal grouping of “authority” Semen Mogilevich; information on the announcement of Mogilevich on the international wanted list through Interpol; 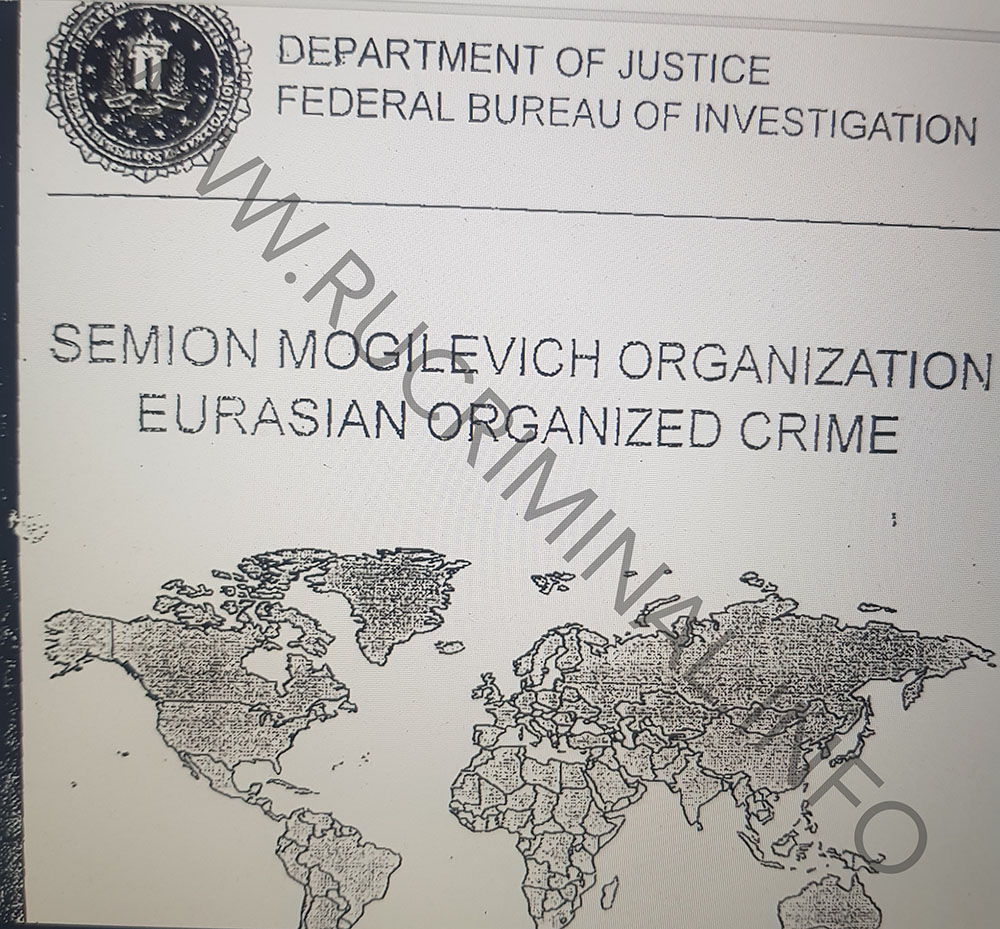 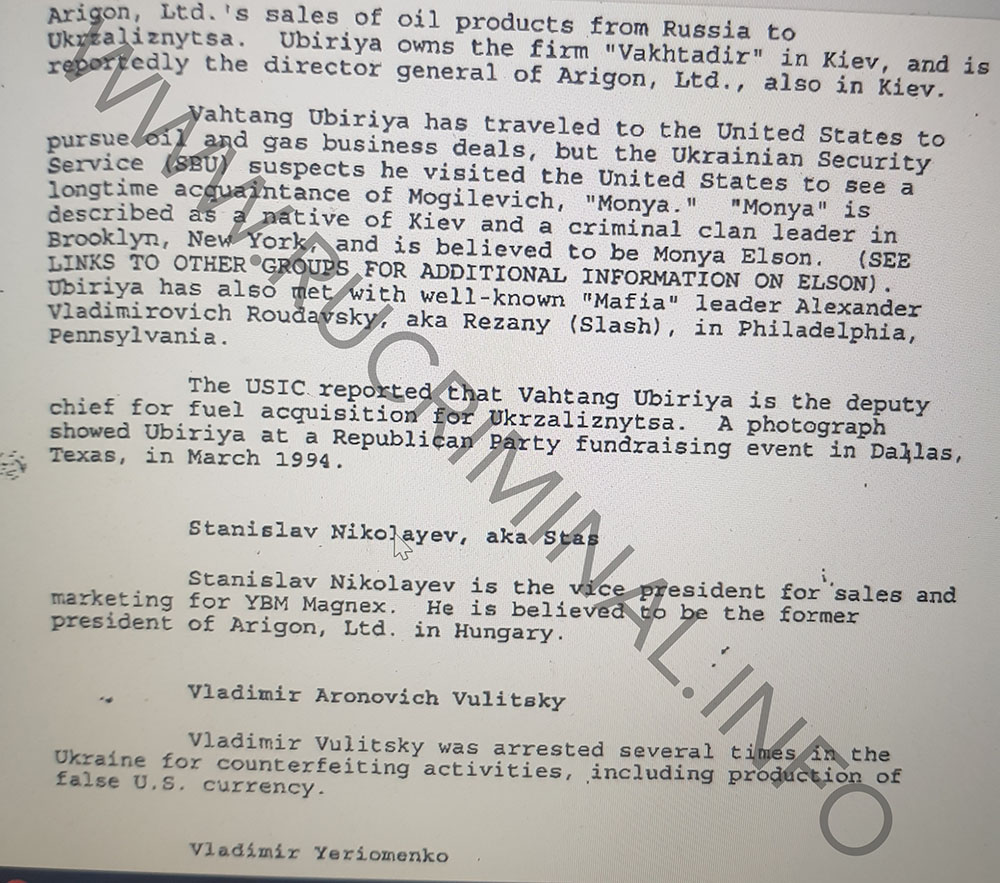 Interpol report on the Solntsevo criminal gang; information about Solntsevsky leader Sergei Mikhailov (Mikhas); a number of decisions of the Federal Antimonopoly Service; a number of decisions of the Arbitration Courts. We are talking about hundreds of sheets of official documents, which, by the will of the minister of Themis in the resort town, should be permanently removed from the Internet and destroyed at the slightest appearance. Thus, Stanislav Nikolaev, Chairman of the Board of Directors of Mercator Holding LLC, decided to help clean up the Network from unpleasant information with his friends and business partners. This company is the largest supplier of cleaning equipment for billions of rubles for the Moscow government. Hundreds of sites and telegram channels, including Nezygar, were chosen as the sites for striking. 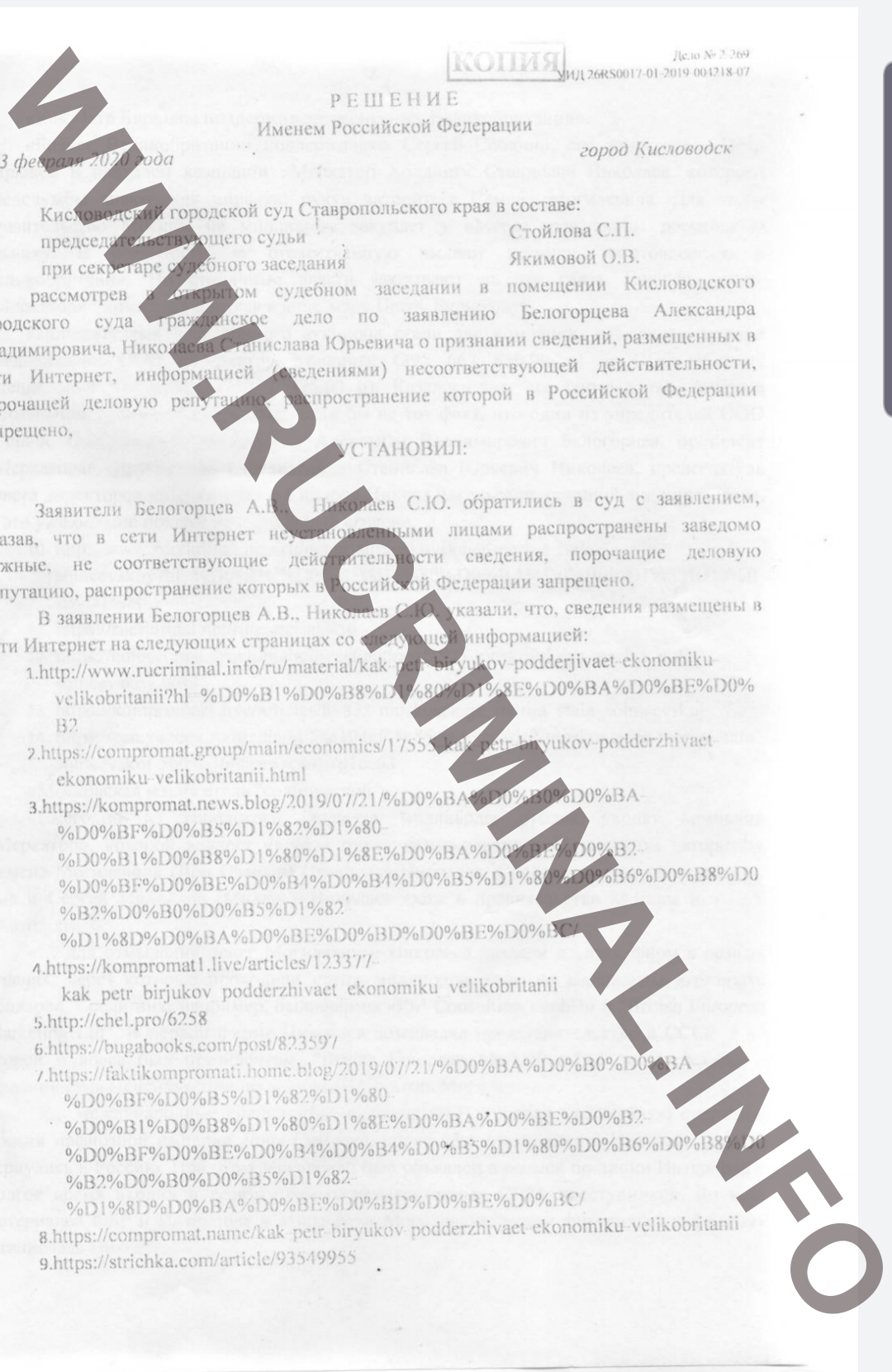 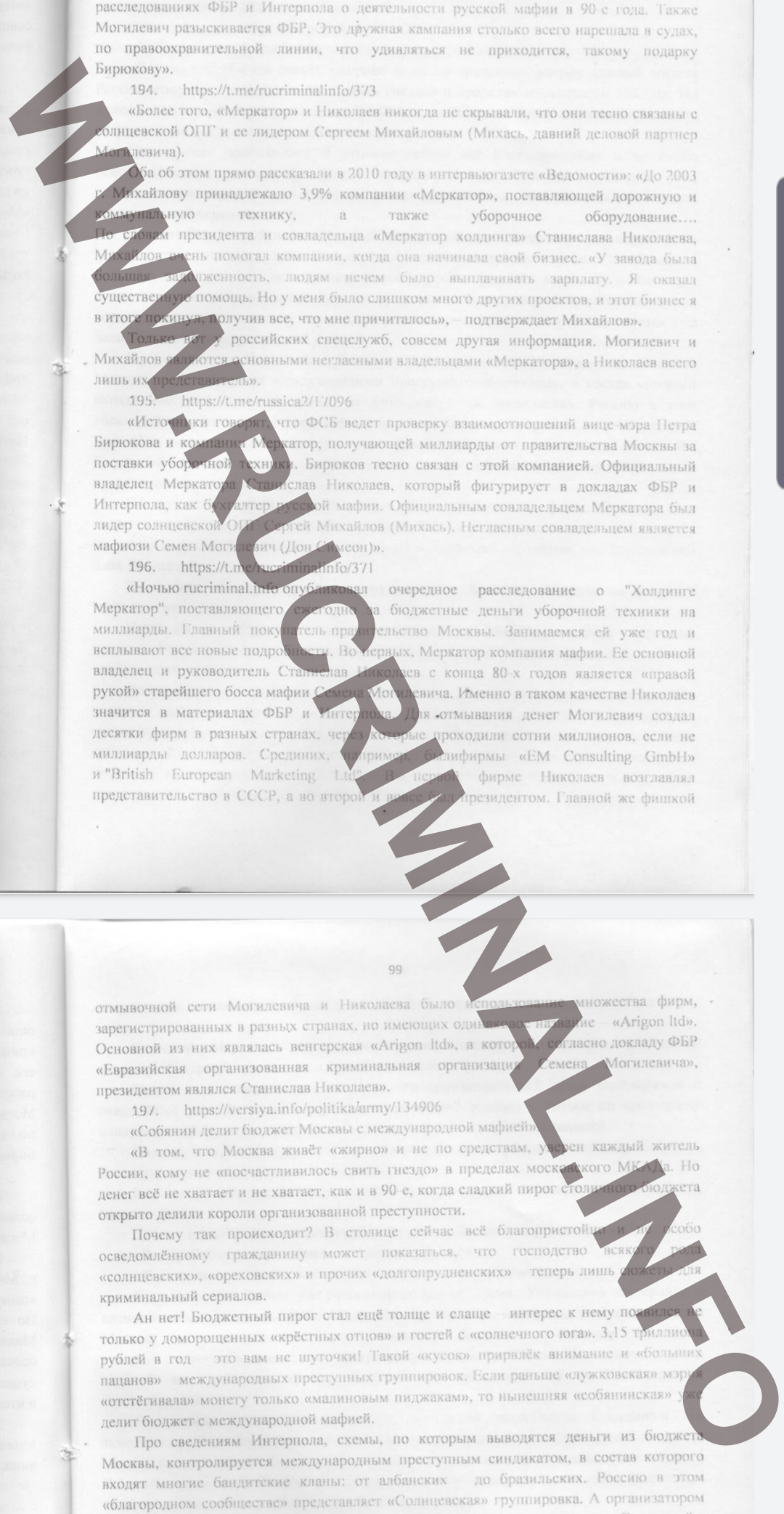 As is often the case with “custom-made” solutions, the large-scale Internet sweeping operation has been quietly verified. Rucriminal.info learned about the existence of a court decision when our investigations about Mercator Holding, its official co-owner Stanislav Nikolaev, unofficial co-owner Semyon Mogilevich (Don Simeon), former co-owner Sergey Mikhailov (Mikhas) and patron Peter Biryukov began to disappear from search engines. The search engines reported that they were doing this according to letters from lawyers Stanislav Nikolaev, to which was attached the decision of the judge of the Kislovodsk court Sergey Stoilov. We got this decision on February 3, 2020 and the hair stood on end. Each line of it is material for the close work of the Higher Qualification Collegium of Judges of the Russian Federation. According to the editors, because of such characters as Stoilov in society, there is a mistrust of the Russian Themis. According to what principle, the Kislovodsk court was completely unclear for filing a lawsuit. Rather, we are all clear about the identity of Stoilov, we will tell in the near future. The lawsuit was filed with dozens of sites and telegram channels, it is about removing more than 200 articles and posts. However, none of the defendants was notified of the hearing. The plaintiffs indicated that they could not find references to the authors of articles, site owners, etc. All this is a complete lie. For example, all materials of Rucriminal.info are signed by the authors, no one has contacted us with official inquiries in this regard. However, Judge Stoilov did not bother with such a formality and, apparently, did not even look at the printouts of the articles (otherwise, he would see the authors' signatures), but simply agreed with the plaintiffs that the hearings should be held without a defendant and no one should be informed about them.

Further there was a more difficult task. The plaintiffs were Stanislav Nikolaev and the top manager of Mercator Belogortsev, and it was necessary to delete information about Don Simeon, Mikhas and Biryukov, who were not participants in the hearings. But this legal problem was also resolved. Usually, plaintiffs demand that only those fragments of articles that speak directly about them are declared untrue. And the Kislovodsk court did not demand true recognition of the gigantic volumes of information in full, where “Mercator” or Stanislav Nikolaev was mentioned. And, being the "right hand" of Don Simeon, Nikolaev appears in all the materials of the FBI and Interpol about the activities of the organized crime group of Mogilevich and the Solntsevo group. “Mercator” is constantly the main “hero” of the FAS decisions on violations during various tenders. 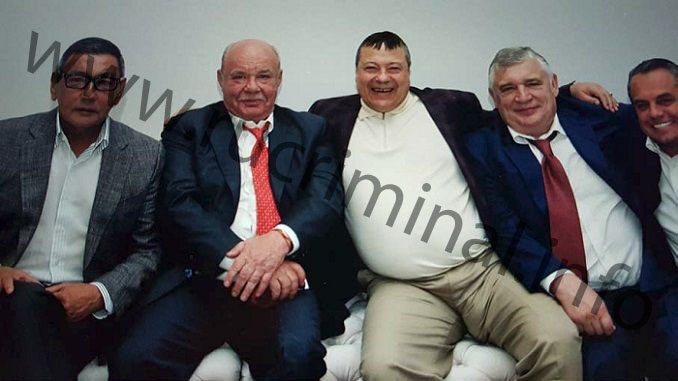 The plaintiff also presented reasons why all the information was false. Like, there are no court decisions that have come into force that this is true, which means it is not.

Judge Stolyov agreed with all the arguments of the plaintiffs, stamped the decision. Then Nikolaev's lawyers waited until in silence the decision came into legal force and ran to clean the Internet. What has now become information whose distribution is prohibited in the Russian Federation? Absolutely all information about the criminal career of Semyon Mogilevich, including information that the FBI conducted an investigation against him and is on the international wanted list. All information about the criminal career of Sergei Mikhailov is absolute, including his being in a Swiss prison, as well as the mention that he was a co-owner of Mercator Holding (at the same time that Nikolaev himself spoke about this fact in an interview with Vedomosti). The report of the FBI “Eurasian Organized Crime Organization Semyon Mogilevich” and the report of Interpol “Millennium”, which featured the name of Stanislav Nikolaev as Don Simeon’s accomplice, are completely prohibited.

The decision of the Federal Antimonopoly Service on violation of the tender for the right to conclude a contract No. 2772765679018000077, which was carried out by the Moscow government to purchase special equipment for the capital’s needs in the amount of over 2 billion rubles of budget money, was recognized banned in Russia. The winner was Mercator, the Federal Antimonopoly Service admitted that the tender was conducted in violation of the fact that Mercator did not provide evidence that the supplied equipment was Russian-made (in fact, it was made in Switzerland and the UK). And a lot of other information. 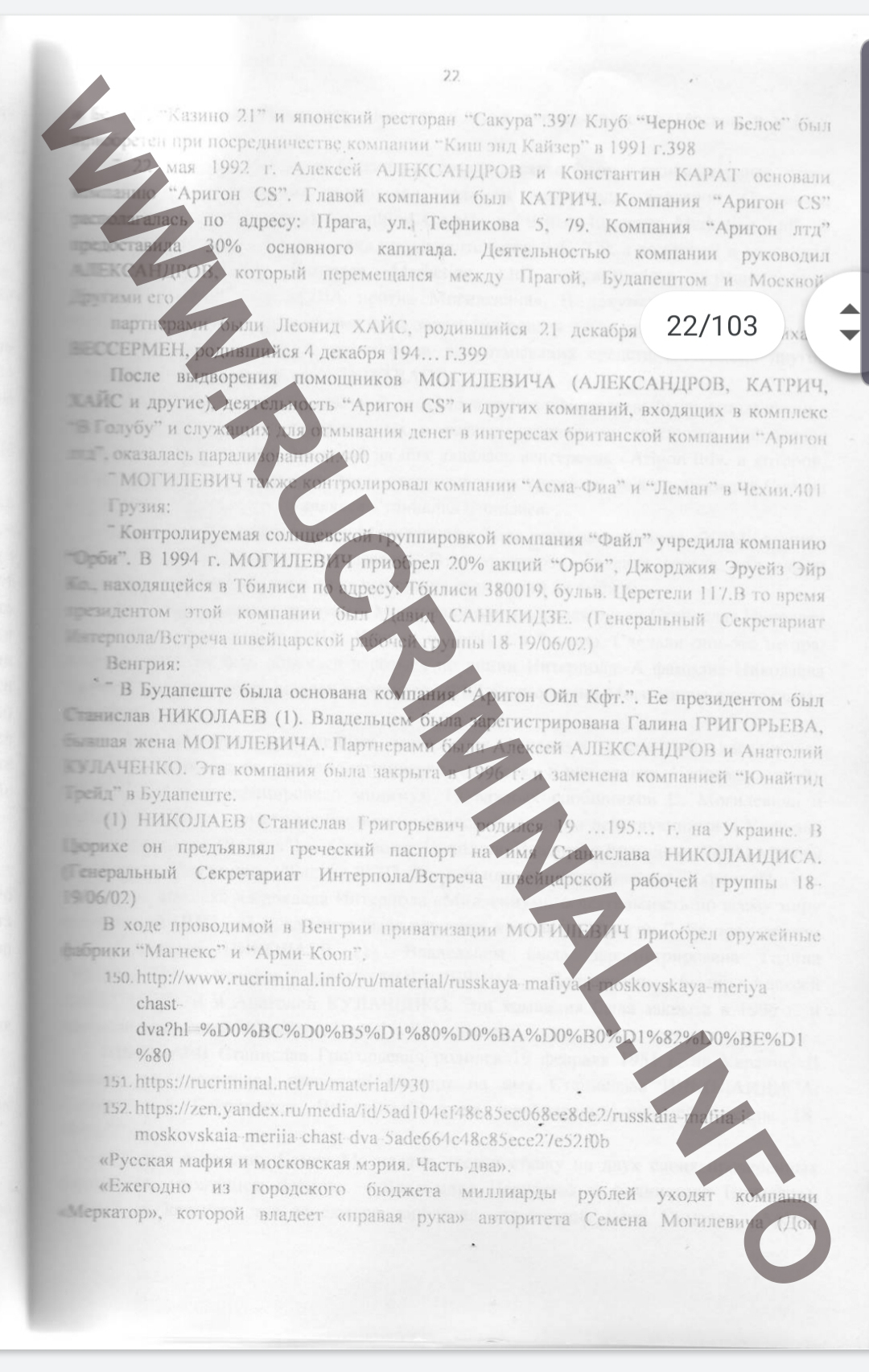 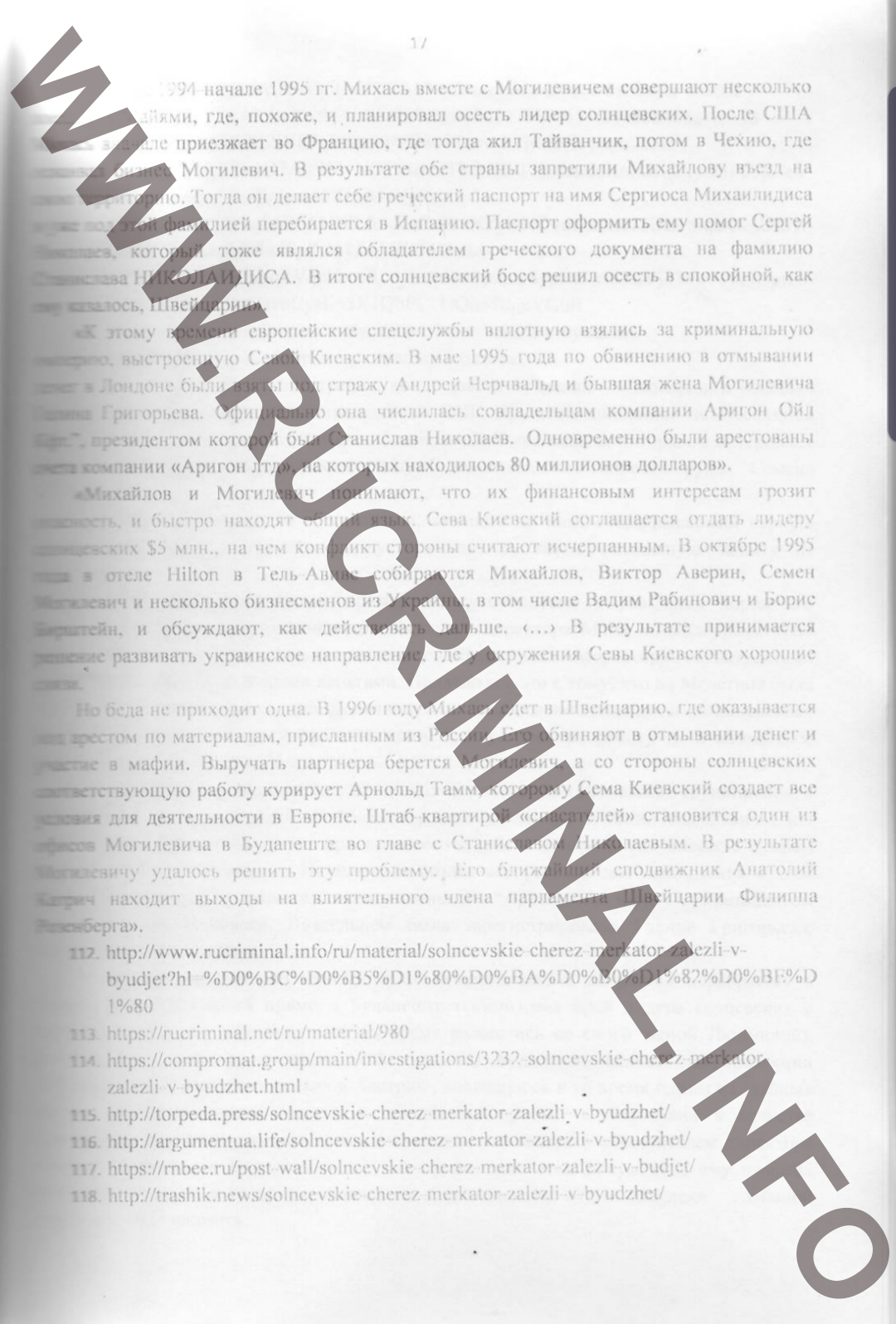