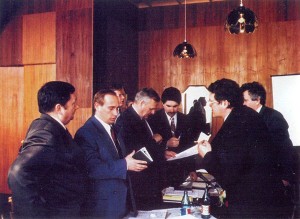 Rucriminal.info publishes the penultimate material from the series of articles written on the case of the murder in 1997 of the vice-governor of St. Petersburg, Mikhail Manevich, a close friend of President Vladimir Putin. This crime has not yet been solved. From the documents that were at the disposal of Rucriminal.info, it follows that in reality the motives, the "customers" and the perpetrators of the murder have been known for a long time. Among those who followed Manevich there was an employee of the North-Western Customs Igor Bondarenko. The materials indicate that the reprisal with the vice-governor is connected with the St. Petersburg seaport. Moreover, the killers were detained. They turned out to be a real detachment of professionals headed by the Chelishov family. In the last material rucriminal.info told how and whom these killers killed from sniper rifles. How roles were distributed in the grouping. What testimony was given by some of the killers, including the shooting at Haymarket. In the new part of the investigation, rucriminal.info cites a peculiar result of the investigation, compiled by the law enforcement officers themselves: what evidence is there in their possession, who is detained, and who is under suspicion. Also, it outlines the planned plan of activities, within the framework of the investigation.

"To date, a significant number of investigative actions have been carried out in the case - over 1,450 witnesses have been interrogated, 8 face-to-face bets, 36 confessions for identification, 95 searches, 32 seizures, 2 investigation experiments, 237 inspections, 136 expert examinations, 7 composite portraits ) and three painted portraits of alleged criminals, 23 criminal cases were instituted and allocated to persons suspected of involvement in the commission of a terrorist act against M. Manevich. and committed various common crimes.

At the same time, in order to verify the nominated versions and identify the persons involved in organizing, preparing and committing the murder of M. Maněvich, the following investigative actions and operational-search activities are still to be performed:

- to continue the conduct of investigative actions and operational-search measures to verify the advanced versions of the reasons and motives for the murder of M. Maněvic;

- to continue interrogations of friends, colleagues and relatives. M.Manevich. to identify possible causes and motives for the murder, as well as persons involved in the commission of this crime;

- to continue checking the received signals with regard to specific persons who may have been involved in the commission of a terrorist act against M. Manevich, including:

- to complete the complex of investigative actions and operational search measures to verify the version of the involvement of members of the criminal group CHELYSHEVYH to commit a terrorist act against M. MANEVICH, as well as to identify possible customers of this crime and persons acting as intermediaries between customers and members called a criminal group. Including interrogation of all arrested members of the criminal group, to complete the research of the samples of blood, hair and handwriting obtained from them, present these persons for identification to witnesses whose words were used to compose portraits of the alleged criminals;

- taking into account the materials of the criminal cases initiated on the murders of SMYRNYAGIN and UAS, to conduct investigative and operational-search measures to verify the version of the possible commission of a terrorist act against MANEVICH by persons involved in the said murders;

- to complete the production of investigative and investigative actions to establish the involvement of BONDARENKO in the commission of a terrorist act;

to complete the operative-search and investigative measures to verify the involvement in the murder of M. Manevich. criminal group in the composition ULYANOVA BK, AKSENOVA Yu.V., VASILIEVA AP. and SMIRNOVA SA »