How to make money and deceive the president? 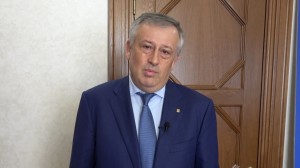 How can you make money and deceive the president at the same time? The governor of the Leningrad region Alexander Drozdenko does it masterfully. Freshly renovated as part of the Safe and Quality Roads national project, the Proba-Lepsari-Borisova Griva regional highway looks more like a deadly attraction with garbage trucks and mud. The specific implementation of the national project was discovered by public ecologist Sergei Gribalev, who publicly accused Governor Drozdenko of sabotaging the president's orders. Details - in the material Rucriminal.info.

The public procurement website shows that the contract for the national project for the repair of this road was signed in the spring of 2021 and fully paid to the contractor at the end of December. The contract was won by DAF LLC - this is the eternal contractor of Lenavtodor, the road department has been regularly signing contracts with it since 2017. The firm is extremely close to Denis Sedov, head of the regional committee for road facilities. We have already spoken in detail about him, as the main source of enrichment for the governor of the Leningrad Region, Alexander Drozdenko.

Here is another example. The contract for the repair of the road was taken by the only participant in the purchase at the full cost - 156 million rubles, without the slightest reduction. The company completed the work without fines and forfeits, Lenavtodor in the person of Sedov liked everything. According to the source of Rucriminal.info, about 10% of the price, in the form of cash, Sedov personally took to the governor. It's not so hard - a couple of boxes of French cognac, filled with "Khabarovsk", one full, and the other half. Of course, the former special forces officer did not forget himself.

Another interesting point. Immediately after the previous publication of Rucriminal.info about theft on road contracts in the Leningrad region, Denis Sedov, together with the second most important regional corrupt official, Andrei Nizovsky, the head of the administration of the Vsevolozhsk district, immediately left on a long business trip ... to Donetsk. Apparently dissatisfied with the attention to his black income, the governor decided to temporarily hide the closest "purses" to hell. It won't work, Alexander Yurievich. In a tall building in Moscow, corresponding daddies are growing and swelling, which will be revealed in due time.