How the senator laundered $ 21 billion

Alexander Babakov was testified against as a member of the Federation Council of the Russian... 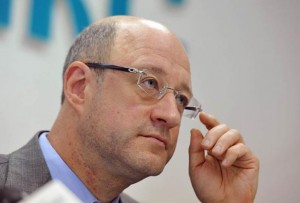 Rucriminal.info together with the telegram channel of the VChK-OGPU continues to publish materials on the most gigantic (in sums) investigation of money laundering and their transit outside the Russian Federation. We are talking about the notorious Landromat. More than $ 21 billion went from Russia through this channel through Russia through Moldova and settled on foreign accounts. At our disposal were the testimony of a key witness in this investigation - the shadow banker Peter Chuvilin. He listed all the beneficiaries of the Landromat. In a previous publication, we cited testimonies about the “laundry” participants from Moldova, as well as about a number of participants, Russian bankers. In a new article, Rucriminal.info makes public the most interesting part of the testimony. It follows that the largest beneficiary of Landromat was the current deputy chairman of the Federation Council Committee on Foreign Affairs, Alexander Babakov. Also in the "Chuvilin list" is the former head of the banking department of the Office of the FSB of the Russian Federation Dmitry Frolov. He is named after his post after leaving the organs. "6. Grigoryev Alexander Yuryevich is the owner of Zapadny Bank, Russian Land Bank and Kreditbank. He maintained close relations with Plato V.N. From his banks, Grigoriev actively participated in the “Moldavian scheme”. 7. Galkin Alexander Alexandrovich and Morales-Eskamilya Agustin Agustinovich - were the actual owners of Bank ZATO-Bank (later it was renamed Smart Bank), Bank Taurus and LLC CB Rublevsky. The indicated persons maintained close commercial and friendly relations with Platon V.N. From the indicated banks controlled by them, he participated in the “Moldovan scheme”.

8. Rafalovich Oleg was the actual owner of JSCB Russian Financial Alliance OJSC, was a close partner and friend of Oleg Vlasov, they both belonged to the biker club, and jointly participated in the “Moldovan scheme”. 9. Alexander Babakov, the actual owner of TempBank, was a State Duma deputy from the Just Russia party, was a close partner of the 1520 group of companies (Usherovich Boris Efimovich, Markelov Valery Alexandrovich and Krapivin Andrey Viktorovich). Through this bank, Babakov participated in the “Moldovan scheme”, probably helping to withdraw funds received from the contracts of the Russian Railways;

10. Dmitry Frolov, the former chief of the bailiffs of the Moscow Region, was the actual owner of Unikor Commercial Bank OJSC and a partner of Sergey Magin. Through this bank Dmitry Frolov participated in the “Moldovan scheme”.

11. Kirill Nikitin, one of the leaders of the Magina bank of banks (Intercapital, Mast-Bank, Unikor, NPO Egnergobusiness), was familiar with Platon V.N. and could take part in the “Moldavian scheme” from these banks.

It is known about the participation of the above, either from these people themselves, who told me about this, or from Platon V.N., as well as from other persons from among common acquaintances and partners.

The essence of the “Moldovan scheme” consisted, as far as I know, of transferring money from people outside the Russian Federation to the accounts of VS Moldindconbank S.A., who planned to withdraw them abroad, under the guise of buying and selling foreign currency at the request of a Moldovan bank.

These operations were supervised by Platon Elena, the whole scheme was supervised by Plahotniuc V.G. and Platon V.N., clients (Russian bankers and people who applied for this service) were sought by Platon V.N. and Korkin A.G., and the bankers listed above who participated in these transactions. After the funds were credited in foreign currency to the accounts of “VS Moldindconbank S.A.”, they were transferred to Platon E.N. to the accounts of foreign companies under the guise of debiting by court decisions of the courts of Moldova Platon Vyacheslav himself told me about this scheme, as well as other familiar bankers, including those listed above.

I know Plato Elena personally, we were introduced by her brother Vyacheslav at one of the general meetings in Moldova. Vyacheslav told me that all payments by Russian banks to “VS Moldindconbank S.A.” are directed by Elena. This information was confirmed to me by Alexander Galkin, saying that he contacted Elena directly for each payment and she made them. Platon Vyacheslav always mentioned his sister as the head of all Moldovan operations at meetings with Russian bankers and entrepreneurs and gave them her contacts for communication. ”