How billionaires finished off their favorite designer Alla Pugacheva Rucriminal.info continues to talk about the criminal story around the death of Boris Krasnov, the beloved production designer Alla Pugacheva, Philip Kirkorov, Valery Leontiev, Larisa Dolina and dozens of other celebrities. Our country owes him such important sporting events as the presentation of Russia before the Olympics in Sochi, the winning bid for the 2018 FIFA World Cup, and the ceremonies of the Summer Universiade in Kazan. And after the incredible victory of Russia at the Expo 2010 exhibition in Shanghai, he entered the top ten best designers in the world. We found out that very strange events preceded his death. When Krasnov was already seriously ill and was in the hospital, his property (one of the apartments) went to Dmitry Komissarov, the chairman of the board of directors of Transmashholding, a partner of billionaires Andrei Bokarev and Iskander Makhmudov, on account of a dubious loan agreement. Some of the richest people in Russia simply robbed a dying artist.

As Rucriminal.info found out, while notary Labzova Larisa Georgievna is still conducting hereditary case No. 2/2022 on the multimillion-dollar inheritance of Krasnov Boris Arkadievich, who died amid strange manipulations with his apartment, in which, in addition to the Federal Property Management Agency for the city of Moscow, "one-day firms » LLC Socrates and citizen Deeva Anna Igorevna, Komissarov Dmitry Georgievich turned out to be "up to his neck" involved.

While law enforcement agencies are carefully studying a very suspicious loan agreement used by an experienced raider, Komissarov Dmitry Georgievich, to “launder” an apartment, in which, as it turned out, there is a passport series 45 ... number 28 ...., which Boris Krasnov was never issued to anyone at all, and besides, for many years it has been listed as invalid (listed on the wanted list), 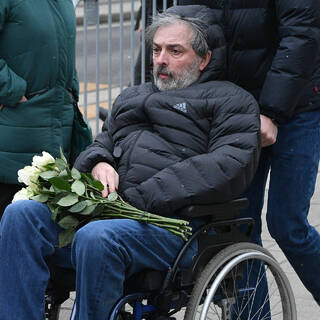 then on the website of Cyan, an announcement has already appeared for the sale of Krasnov's three-level family apartment, in which he lived with his wife before his death.

Luxurious three-level penthouse 483 m with interiors by Bellotti Asnaghi Interiors Savio Fermini and antiques. Made in the style of classic salons of the 19th century. The apartment is ideal for representative purposes, receptions, for a large family.

All interested parties can evaluate the layout, the interiors of the apartment, its market price, the taste and the level of well-being of the artist, who died alone in the hospice.

Interestingly, according to official data from the Federal Notary Chamber, Krasnov died at the very beginning of July 2021, while he was buried only in September last year.

Maybe the goal was originally to wring out the smaller apartment from Krasnov, to cause stress / stroke in the already sick artist, in order to wait for his imminent death and take possession of the three-level penthouse? That residential real estate that satisfies the ambitions and appetites of Komissarov much better and is much better suited "for representative purposes and receptions"? After all, it is unlikely that Dmitry Komissarov planned to "huddle" in an apartment of 72 square meters ...