As the ex-owner of "Genbank" Dvoskin generals "fed" 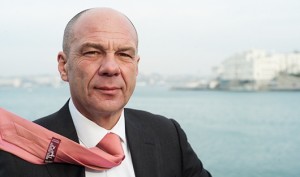 The owner of "Genbank" Evgeni Dvoskin continues to celebrate the victory over Russian law enforcement agencies, the budget and just common sense. Under the pretext of helping the Crimea, in which he opened branches of his "Genbank", Dvoskin all before his eyes pumped out of it 15 billion rubles. And not for any social projects, but simply "put it in your pocket." What should this be? Correctly: revocation of the license from "Genbank", initiation of the case, sending to the remand center. What did Dzuskina's good friends Vasily Pozdyshev, deputy head of the Central Bank, and Dmitry Tulin do? They "closed their eyes" to all the leprosy of the banker and organized the sanation of "Genbank". Yes, Dvoskin lost him. But, according to Rucriminal.com, he happily dropped this burden of responsibility with a "hole" of 15 billion rubles. And nothing for it will not be. In autumn or early 2018, we should expect the transition to Dvoskin's control of a new bank.

So he is clinging to life very long ago, stuffing his pockets. Why? Yes, because Eugene Dvoskin always knew how to share with the right people. And not only from the Central Bank of Russia. Many of the generals of various departments visited his allowance. For example, former deputy head of the Russian Interior Ministry's DEB Andrey Dvoskin and deputy head of the FSKN Nikolai Aulov. The first went off with a huge scandal: criminal cases, allegations of corruption. Do you think you "drowned"? Not at all. According to Rucriminal.com, at first Horev settled into the business empire of the brothers Boris and Arkady Rotenberg. He was in charge of the safety of their alcohol business, then he performed special assignments in Mosoblbank, which sanified the SMP Bank of Rothenberg. Since 2014, Khorev has been a member of the board of directors of JSC Eurasian - a structure on whose owners "there is nowhere to put a brand". No less "enchanting" went and Aulov-Spain transferred to Interpol materials for his search for links with the Tambov OPG and "money laundering". But he also did not disappear and found himself a sweet place.

Dvoskin, Khorev, Aulov-these are unsinkable people. And that's strange, the secret services have known all about them for a long time. This is clear from the long-standing reference of one of the agencies that was at the disposal of Rucriminal.com.

Since 2000, due to factors of a conjunctural nature, the economy of the Russian Federation has received a new impulse for a global restructuring of its domestic economic and political potential.

According to the statistics of the Ministry of Economic Development, macroeconomic indicators are approaching the world ones every year.

To more effectively combat various types of economic crimes, the State is creating more and more units in these structures. Mainly with sonorous names and global functions. Practically only lazy, does not write and does not say in his reports about so-called "one-day" firms and great efforts of law enforcement agencies aimed at identifying and further proving certain economic crimes.

However, no one, for 7 years, did not even mention - who contributes to the main types of crimes and what happens in the financial sector of Russia.

After the murder of the first deputy of the Central Bank of Russia in the press appeared rabid articles on money laundering, "cashing" of large amounts of money through various lending organizations, as well as lists of banks that have already revoked licenses for money laundering and "cashing out." At the same time, there are practically no real persons identified by law enforcement agencies and special services involved in these types of crime in seven years. In general, the so-called "signatories" (persons who are willing to provide their credit organization for the implementation of these operations or who are ready to assume the post of bank chairman) are brought to criminal responsibility.

So, in the period from 2004 to the present, licenses for more than 110 banks and non-commercial organizations have been revoked for these operations. According to the official statistics of the State Corporation for Deposit Insurance, the amount of money laundered and cashed through these banks and NCOs amounts to more than 1 trillion rubles. However, this figure is greatly understated. So, only one OPS (organized criminal community) from April 2004 to February 2005, 235 billion rubles, $ 391 million, was cashed. And 66 million euros. The OPS used the details of only two "target" banks "Rodnik" and "AKA-Bank". Through the NGO "Komist Inkass" for six months of 2006, 75 billion rubles have been put into the shadow turnover. This list can be continued.

But the most "free life" data OPS received from November 2006 to the present.

Thus, over 50 credit institutions were "burned" for this period of time. Law enforcement agencies responsible for the economic security of the country have not established or brought to criminal account any person.

At meetings, the leaders responsible for this area of ​​economic security report only the case of Sokalski B.B. (Nickname "Lenin"), who was arrested on March 27, 2007, Elbakidze D.E. (Nickname "Juba"), which in 2006 was declared a federal wanted list.

However, in May 2007, the new leadership of the DEB of the Russian Ministry of Internal Affairs took all measures to dismiss employees who were engaged in the development of FSOs engaged in illegal banking operations connected with cashing, laundering, withdrawal of foreign currency funds, financing of terrorism and extremism in Russia.

Thus, Khorev A.V. Repeatedly passes through a number of developments carried out by the Ministry of Internal Affairs of Russia. According to the available data, he provides full protection to the Amerkhanov group (cashing, money laundering, financing of terrorism, etc.). Has a direct relationship to the group of Myazin IG, Sitnikov, Dvoskin EV (Cashing, laundering, financing of terrorism).

The last group for its existence "burned" more than 40 credit organizations and is currently continuing its march. These crimes against the national security of the state are built on close relations with A.V. Khorev, and also A.Alovov, the head of the Main Directorate of the Ministry of Internal Affairs of Russia for the Central Federal District, who, having control levers in the Ministry of Internal Affairs of Russia, "supporters" on the average link of the FSB of Russia "M") skillfully close all the problems of these groups.

So in November 2006, after assuming the post of Chief of the State Administration, Aulov NN. Organized criminal activity through CB "Migros", which was acquired by the OPS Meazina IG.

To achieve this goal, the employees of the Central Federal District, on the instructions of Aulov NN, started the material on Migros CB and, under cover of this material, for 20 days, while in the bank, controlled the illegal banking operations (the fee for the "roof" 100 Thousand US dollars per day). Using the requisites of this credit institution, the OPS received a "profit" of about $ 30 million. USA for 20 days.

Practically for all "burnt" banks, the profit of this CSO fluctuates around $ 20 million. USA (no one is prosecuted).

According to the collected information, Aulov himself visited CB Migros during illegal banking operations.

The proximity of Aulov N.N. To these persons is due to his long acquaintance with citizen Dvoskin EV (A representative of Ivankov KV "nickname Yaponchik"). Acquaintance was held through Malysheva A.N.

According to FBI data, citizen Dvoskin EV March 21, 1966, he emigrated with his mother to the United States from the USSR. There he settled under the surname Slasker EV. Between 1989 and 2001 he was repeatedly brought to criminal responsibility by law enforcement agencies (robberies, weapons, drugs, false documents, fraud). The agents of the Federal Bureau of Investigation established more than 10 names that the citizen used to carry out his unlawful activities.

In 2001, a citizen Slousker EV Deported from the United States. With the help of his accomplices, he legalized in St. Petersburg. Full legalization of this citizen was carried out in June 2002 through the passport desk of the OVD of the "Oktyabrsky district" in Rostov-on-Don (according to false documents he gets the name Dvoskin). Immediately he becomes the founder of JSC Pelican, where he was given 60% of the shares (gaming business). In 2002, with the help of Aulov NN, he legalized in Moscow and opened a representative office of Pelican.

Later he gets acquainted with Mezin IG. (Previously this citizen was involved in a criminal case of embezzlement and also had contacts with the former head of the RUOP for St. Petersburg, Aulov) and is involved in nude business (in fact, this group becomes one of the sponsors of Aulov NN's promotion to senior positions).

In 2007, the Russian Ministry of Internal Affairs DBOPiT, SC at the Russian Interior Ministry, with the assistance of the FBI and the Federal Financial Monitoring Service, produced conclusive evidence of the involvement of the OPS to the financing of terrorism and the identification of data Dvoskina EV

Through the Rosfinmonitoring channels, requests were sent to Spain, France, Monaco, Germany, the United States and other countries to establish accounts and real estate of the above-mentioned individuals.

At present, Aulov NN, exceeding his authority, hides the citizen of Slusker EV from the investigation and the FBI staff. It is not excluded that in order to conceal the traces of their illegal activity, citizens Khorev AV, Aulov NN, As well as other individuals will go to extreme measures to eliminate unnecessary witnesses who have information on the financing of terrorism, the murder of the first deputy chairman of the Bank of Russia, etc.

Until September 13, 2006 (the killing of Kozlov), IG Iazin, EV Dvoskin. Belonged to the OPS, headed by Elbakidze E.D. (Nickname "Juba"), in the same place, as an assistant, was and Frenkel. The last meeting of Myazin and Frenkel was recorded on January 10, 2007, on January 11, 2007, Frenkel was arrested. At present, the analysis of financial transactions according to Discount Bank shows that the money supply went from KB "Belkom", which was controlled by Mezina I.G.

At the same time, in 2003, the FBI investigation revealed that Sloskier "Dvoskin" is involved in financial frauds in the United States and he faces 25 years of imprisonment.

This development is also not a desirable witness for Aulov NN, Khoreva AV And other officials may be Elbakidze DE ("The name of Juba"). Previously, he was a financial adviser to Senator and billionaire Jim Carrey USA.

At present, it can be stated that, in addition to the financial authorities based on criminal flows (financing of terrorism), these individuals and their entourage will attempt to seize top posts in the Russian Ministry of Internal Affairs, the FSB of Russia.

For these purposes they use both information resources and official powers granted to them by the State.

In view of their greed, this group of executives, apart from inflicting economic and political damage to Russia, is directly involved in the death of law enforcement officers in the North Caucasus. This is a full cover in the financing of terrorism and extremism.