Criminal list of the owner of Alfa-Bank. Part three. 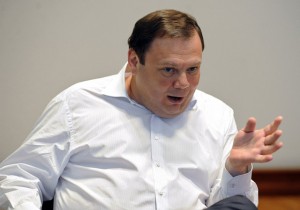 Rucriminal.com publishes the continuation of the investigation (see the first and second parts) about how law enforcement bodies actively investigated criminal cases that were conducted directly to Mikhail Fridman. In the first article we talked about how the UK under the Ministry of the Interior of Russia investigated the money laundering case, in which Alfa Bank also appeared. Moreover, the investigators found that in the dark schemes, LLC "Velteks" was involved, the only founder of which was Mikhail Fridman. In the second article Rucriminal.com described how, with the help of this very "Velteks", a state dacha was stolen in "Sosnovka".

At the same time as the Ministry of Internal Affairs has stepped up work on the case "Sodbiznesbank" Military Investigation Department "blown away" by the dust and "Sosnovka" investigation. This was due to the fact that in 2008 in the Kremlin law enforcers suddenly "gave in to Friedman."

As a result, the investigators had a whole set of cases that led to Friedman. As they say, "choose to taste." After long meetings, it was decided to stop at the investigation of Sodbiznesbank, where there was an "iron" evidence base. This bank worked closely with the "Alfa-Bank", engaged in financial fraud involving the company "Velteks" and the sole founder of "Velteks" was Mihail Maratovich Fridman. The case for starters was decided to be opened under Article 172 of the Criminal Code of the Russian Federation (illegal banking activities).

As a result, in the spring of 2008, investigator SK Pavel Zaitsev went to Mikhail Fridman to question him on this case. During the interrogation under the video camera Mikhail Fridman with a smile said that he is a colonel of the reserve, and called the workplace "Alfa-Bank." Essentially issues Friedman explained as follows: when in 2005 there was a question about buying a government dacha "Sosnovka-3", he appealed to the head of legal department of Alfa-Bank Vsevolod Kusova with a request to pick him some of the structures and clear it of any problems. As a result, the subordinate oligarch and offered to LLC "Velteks."

In November 2008, Zaitsev withdrew from the case 290838 materials on Fridman, Alfa Bank and sent them to the DEB of the Ministry of Internal Affairs of the Russian Federation to collect additional information.

Over the head of Mikhail Fridman and the leaders of his structures, in particular Alfa Bank, the clouds were rapidly gathering, and there it was felt. And they began to actively take protective measures.

The criminals express the opinion that in this operation the active help was rendered by the then deputy chief of the DeB Horev and the deputy head of one of the departments of the Criminal Code, Natalia Vinogradova. As a result, mysteriously disappeared archive "Alfa-Eco" and "golden shares", which was seized by Zaitsev during searches in the "Alfa-Bank" and which were painted mechanisms raids of several enterprises. According to the decision Vinogradova case on the farm "Matveevsky" which featured "Alfa-Eco" and LLC "Velteks", it was transferred to GUS in the Moscow region police department, where he came close. Experts believe that after that, the forces close to Alfa Group became poorer for $ 2 million.

No less interesting events occurred with the documents on Sodbiznesbank and Alfa-Bank. SC under the Ministry of Internal Affairs of the Russian Federation requested the previously transferred materials from DBS with the results of additional verification. All these documents were necessary to initiate a separate criminal case about the theft of the funds of Sodbiznesbank, the main defendants, who could become representatives of Alfa Bank and Mikhail Fridman. However, an incident arose with the materials. Two employees of the DeB on which they were painted, urgently disappeared - officially one went to the sick leave, the other - on vacation. On this basis, documents in the UK under the Ministry of the Interior of the Russian Federation were not received from the DEB.

Here, the situation had to interfere personally Interior Minister Rashid Nurgaliyev. And immediately the verification materials for Alfa-Bank were found. It turned out that they were at the deputy head of the DEB of the Ministry of Internal Affairs Andrei Khorev.

Now, it seemed, there were no obstacles to the initiation of the case, the main figure of which was to become Mikhail Fridman. But here the human factor interfered.

The then head of the Interior Ministry's Criminal Code, Alexei Anichin, did not rush to begin the investigation. First, his labor contract expired in October 2009, besides, the age is not young - 60 years. Before retiring, I did not really want to get involved in a similar story. The head of the UK explained his indecision by the fact that he can not find an experienced investigator who can be charged with this matter. All employees of the UK, who previously engaged in the investigation of the activities of "Alpha", suddenly stopped working in the investigative part of the UK. In particular, Pavel Zaitsev received a notice of dismissal. The necessary investigator was later found, which, however, was also not happy with this prospect. He set his supervisor's conditions: on the day of the criminal case, Friedman will be given a preventive measure in the form of detention. And again Anichin thought about it, again began to waste time, hoping that the conflict would be settled and the commencement of the case would not be required. Also it has appeared the rights.

Realizing that the security forces alone can not solve the problem, Mikhail Fridman used all his possible levers. Some of them worked and the "good at Friedman" from Cremoy was canceled.

During all these events, at a "closed" meeting with the leadership of the newspaper Vedomosti, Mikhail Fridman was asked how he would act if he were in the position of Mikhail Khodorkovsky. To this Friedman honestly replied: "I'm not such a patriot as Misha and definitely would have left Russia."