"Nazarov A. G. made sexual intercourse against the will of the victim» 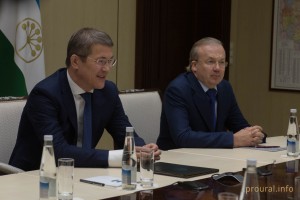 Co-Chairman of "Business Russia", the beneficiary GK "Grenelle" Andrei Nazarov for the first time publicly spoke about his future appointment as the Prime Minister of the Republic of Bashkortostan. He declared that "is ready to work in Habirov's team".

"On the eve of several local media betting on the future Prime Minister of Bashkiria and, thank them very much, included me in this rating. But still, I would at this stage left these "chips" sports bookmakers and focused on those theses that broadcasts and implements Radiy Faritovich" - wrote Nazarov in Facebook and said that he was ready to work in a team of his "friend" and "colleague", acting head of Bashkortostan Radiya khabirova.

It would be great to see in the Prime Minister's chair a man who has a criminal record for the rape of a minor. It will be something new in the ruling elite of Russia.

In this regard Rucriminal.info publishes a new article with one episode of the eventful biography of the owner of the company "Granel" Andrei Nazarov. He was previously convicted for that drunk smashed cafes, and then his buddies raped a minor in the basement. All this follows from the copy of the sentence concerning Andrey Nazarov taken out by Baymaksky district court which appeared at the order of the edition.

"The court has not established a criminal conspiracy to gang rape victim Kaplin, Nazarov, Polin, found that sexual intercourse with A. each of them committed one, and the other physical and mental care is not provided…

The lack of conspiracy to gang rape is indicated by the contradictions of the criminal case materials, as well as the testimony of the victim herself.

The victim showed that her rape she was clutching the knees, bent over, but her legs were spread by the force of arms and had sexual intercourse. According to the conclusion it is judicial-medical examination, signs (bruises on an internal surface of hips) of violent cultivation of legs at the victim aren't revealed…

The court finds no qualifying sign of ...rape of a minor. At the time of the crime A was a minor, she was a full 17 years," - said in the sentence, a copy of which is available Rucriminal.info ahhh!

"However, the case is not established that defendants knew about her underage or might assume that since until November 19, 1986, they were not acquainted with the victim, met with her, did not have any data about minors, except minor defendants…

The court finds that the actions of the defendants Kaplin and Nazarov must be qualified under part 1 of Art. 117 of the criminal code of the RSFSR, for all those circumstances in which sexual acts were committed by Kaplin and Nazarov with the victim A., indicates that sexual will committed against her will, without her consent.

The court, when imposing a punishment on the defendants, takes into account the circumstances mitigating the responsibility of committing a crime at a minor age.

On the basis of article 44 of the criminal code of the RSFSR A. G. Nazarov appointed punishment is considered conditional with a trial period of one year." 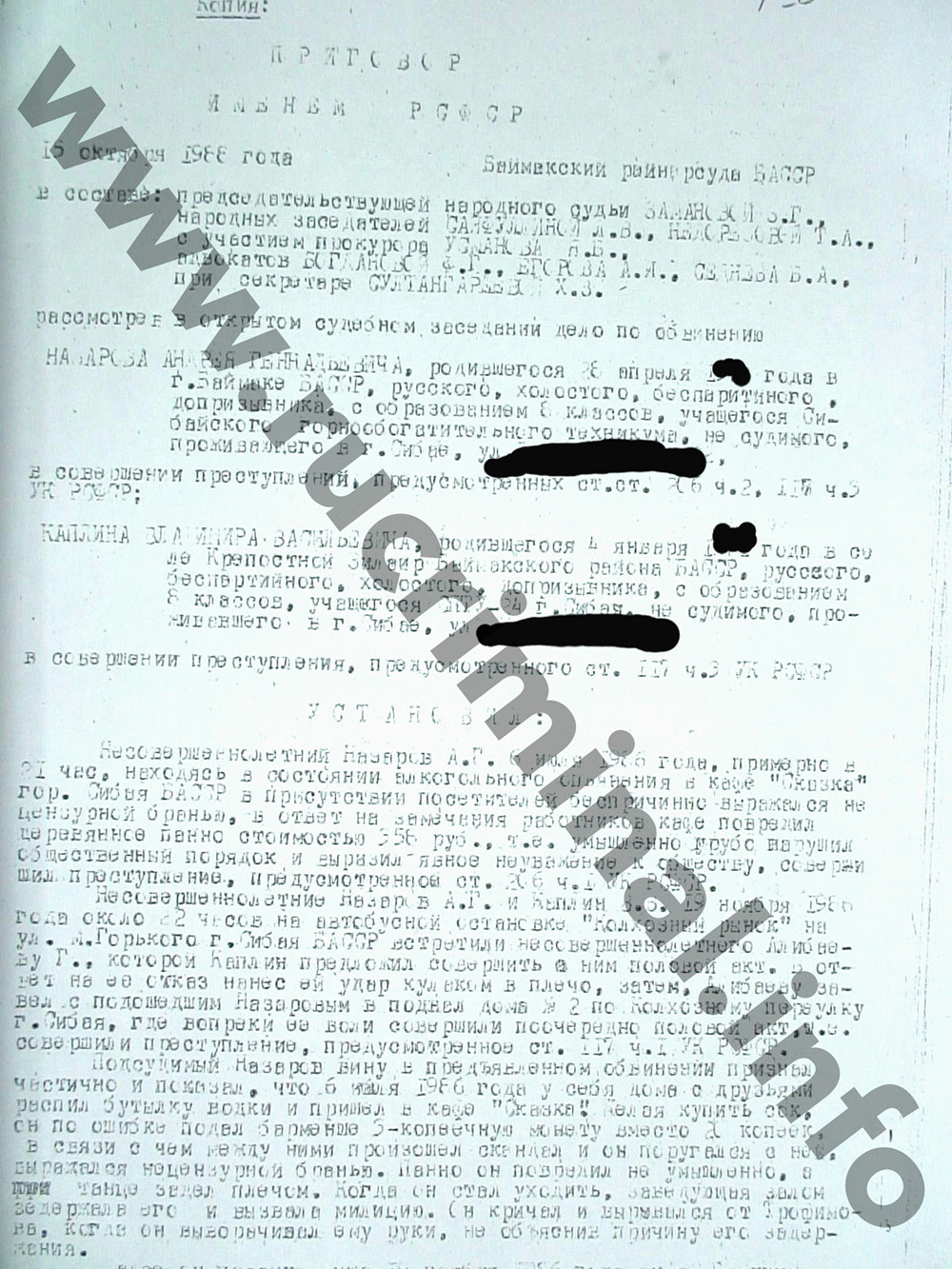 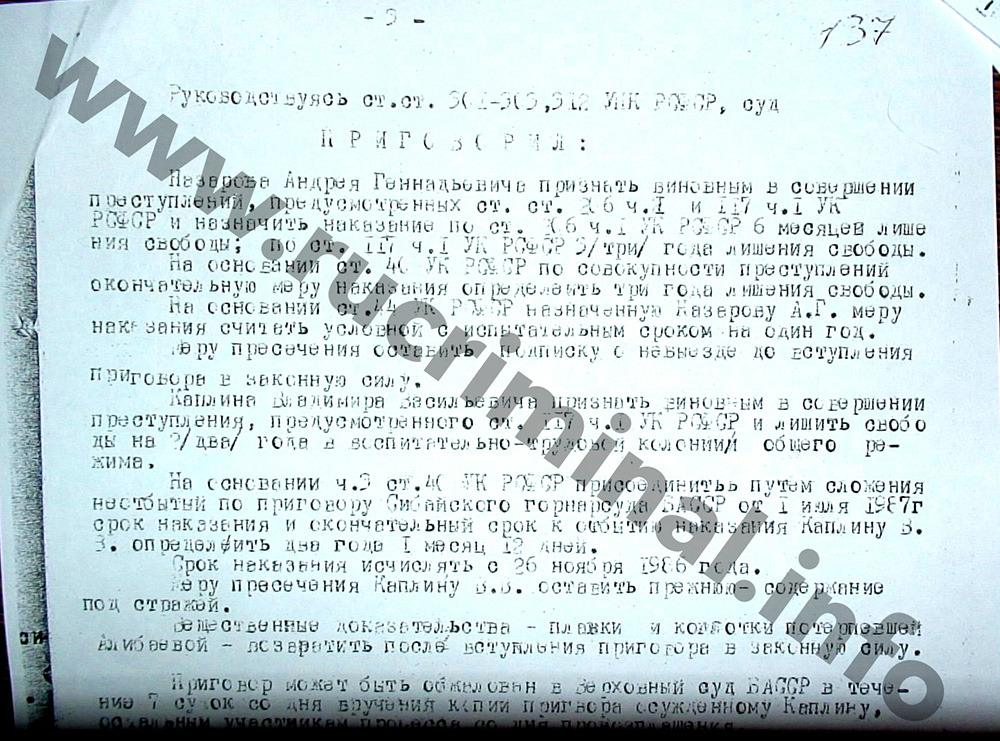 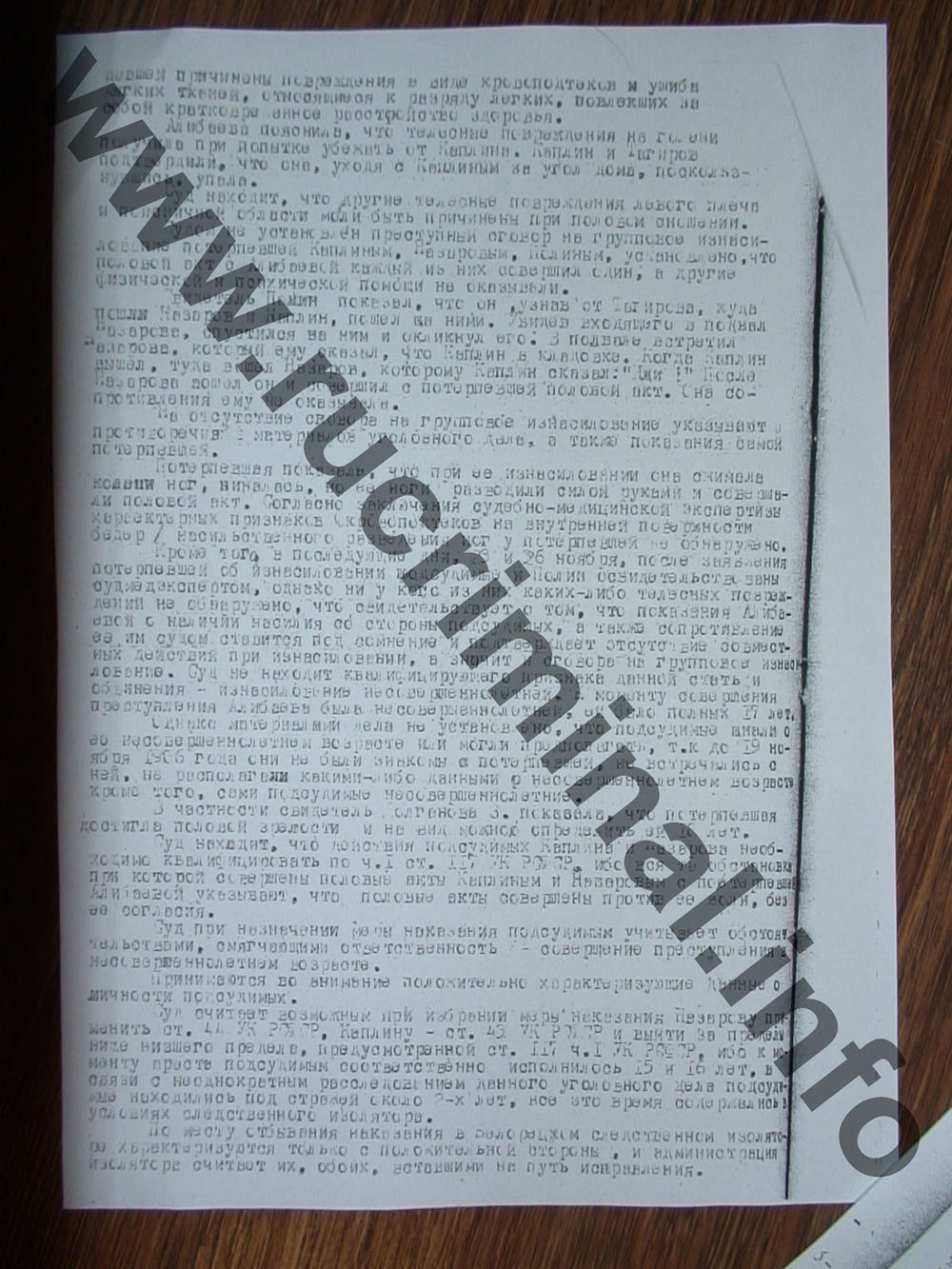