rucriminal.info publishes the materials of the case against Raul and Rauf Arashukov In connection with the arrest of Raul and Rauf Arashukov rucriminal.info returns to the publication of the case file, in which the father and son were arrested. Earlier we gave testimony of Rasul Adzhiev, who by order of Rauf shot public figure Aslan Zhukov. Also, readers are able to see on our website with the testimony of Rustam Kopsergenov who received from Arashukova Jr. the order to murder the policies of Frala Shebzukhova and handed it to the killer. In the new publication, we will present the freshest and most "delicious" materials – about the theft of the family from Gazprom by 31.7 billion rubles.

Raul Arashukov, being the "gas king" of the North Caucasus, spent most of his time in his native KCR, occasionally making forays into neighboring regions, where he had a huge influence and the Palace. For example, he liked to visit Essentuki. In Moscow and St. Petersburg Arashukov senior was chosen exclusively to discuss with their patrons of "Gazprom" important issues, well, to take a suitcase of money. It has never been a secret that Raul has always been the " back "of top Manager of Gazprom Kirill Seleznev-the favorite of the head of the state company Alexei Miller. They have been together since the days when in the 90s they worked at JSC "sea port " St. Petersburg". Seleznyov headed "Mezhregiongaz", also worked there his favorite companion Elena Mikhailova. By the way, Mikhailov - the former wife of another colleague of Miller's port, and now also Gazprom's top Mikhail Colleague. The vicissitudes of this "triangle" - Seleznev, Mikhailov, Sirotkin-could well form the basis of the series "Milkmaids from" Gazprom", but this, as they say, is another story.

In recent years, Raul Arashukov was officially listed as an adviser to Seleznev. However, the official position here was absolutely unimportant. Arashukov with the approval of Seleznev ruled all gas Affairs in most regions of the North Caucasus Federal district, not forgetting to regularly carry the lion's share of income "up". These same "top" and promised not to give him offense when the case of contract killings in the KCR went to Moscow and began to gain momentum. Until December, Arashukov Sr. was on "relax", not particularly worried about what is happening. But then I began to understand that"the smell of fried". Moreover, in his native KCR it became unsafe for him. And I know where he was hiding from a possible arrest? In St. Petersburg, right in the office of Mezhregiongaz and under the wing of Seleznev. Raul was absolutely sure that they would not come there for him. He did a rare "outing" in the KCR and then hurried to Peter, to Seleznev. Not help. Came straight to his office at Mezhregiongaz. Well, actually, it could be different. When running Management " K " FSB, such characters as Seleznev is better not to stand in the way, and to hide away under the table.

Of course, readers interested in the question what to expect in the future Selezneva. We want to disappoint you. Of the materials that are available rucriminal.info, at this stage of the investigation, he is not threatened with landing. While in the TFR believe that Raul Arashukov, committing a giant theft, "deceived " Gazprom", that is introduced Seleznev misleading. However, a couple of necessary indications and the situation may change. We will monitor the situation and inform the readers. In the meantime, back to the case file. In the course of a criminal investigation it was established that the General Director of LLC "Gazprom Mezhregiongaz Stavropol" (LLC "Stavropolregiongaz" ) Arashukov R. T., for the purpose of plunder in especially large size natural gas supplied by Gazprom via other legal persons in the enterprises of the gas industry of the North Caucasus, that is, to commit serious crimes, using his official position, created a criminal organization, which at different times attracted Agoeva, R. M., Kalmykov, W. M., Kasukawa R. M., W. R. Evgamukov, Hasukawa G. V., Romanova N. N., Travinov I. V., Kyatova A. O., composed with him in the family and other swaha and other unidentified persons.

"To defraud the supplier of natural gas and cover up the theft of members of a criminal organization provided the opening in the databases of the enterprises of the gas industry of fictitious accounts, according to which the payer for the supplied natural gas is missing or has an invalid address, or by specifying the secondary address of residence (location) of the payer for the properties located at street intersections and dual-address, thereby created the conditions for the theft of natural gas, allegedly delivered to the address of the non-existent subscribers», - according to the materials of the case, which has rucriminal.info. 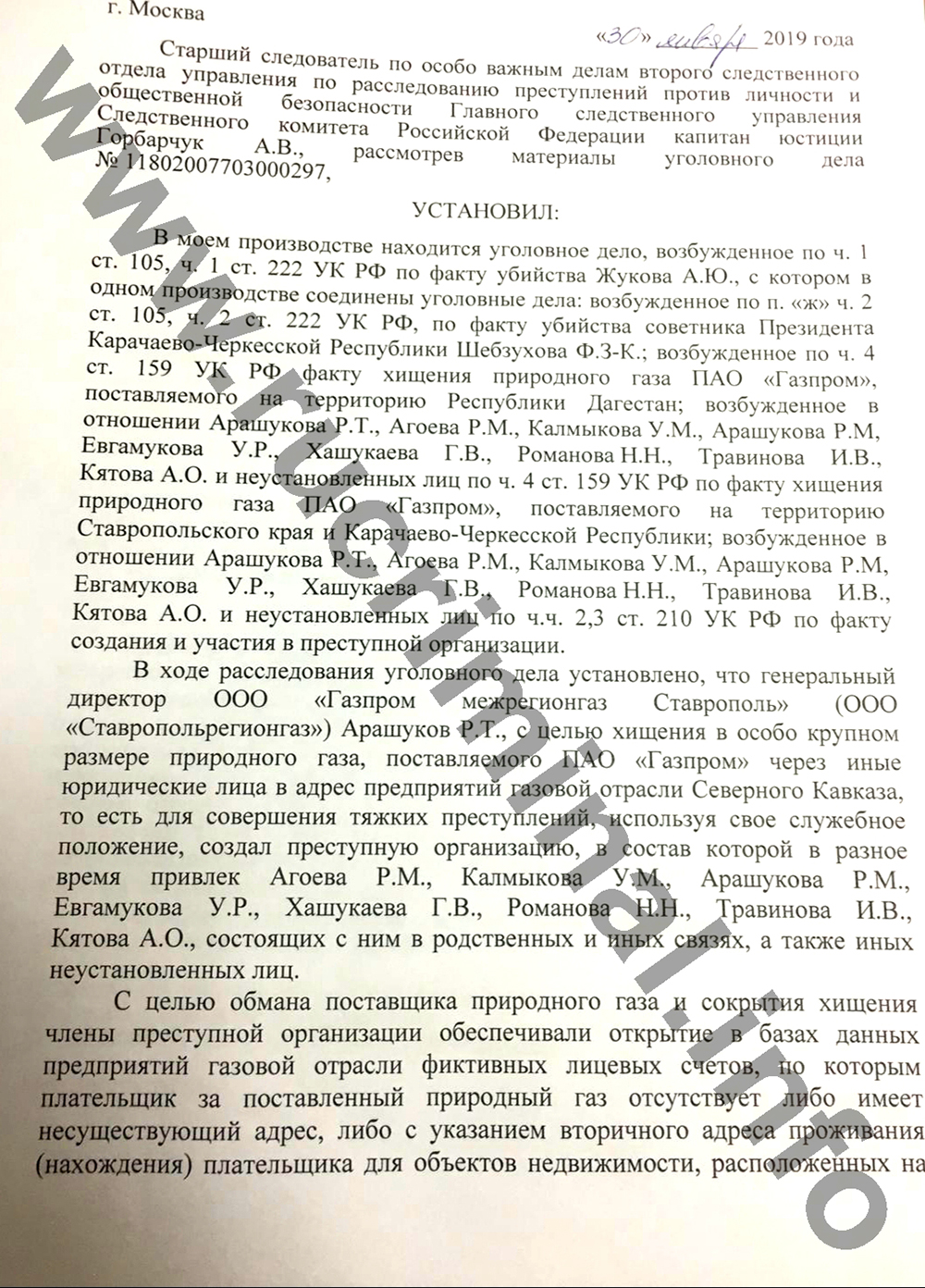