"Zhirinovsky runs around the AP with a suitcase of money"

Will the LDPR leader manage to buy the governor's chair for Sergei Zhigarev? 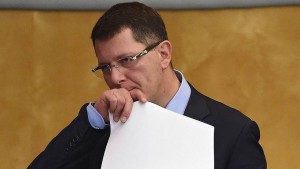 Do you remember Sergei Zhigarev - that very people's choice, whose mistress stole 25 million from the safe? According to a Rucriminal.info source, having failed to retain the post of Chairman of the State Duma Committee on Economic Policy, Industry, Innovative Development and Entrepreneurship, now he is going to sit in the chair of the Governor of the Oryol Region. Moreover, Vladimir Zhirinovsky volunteered to help him, who is now running around with a suitcase of money around APeshka and is trying to solve the personnel issue of the ward for 9 million dollars.

Why and why does Zhirinovsky fight so hard for Zhigarev? The leader of the Liberal Democratic Party of Russia loves not only young boys, but also those who know how to enter amounts with big zeros for him. Colleagues in the shop from the State Duma say that Zhigarev in the 7th convocation was not shy and he had a fee. To push through the bill - $ 5 million, and always with a proviso, they say, this is all for the native party, and not for the escort girls. However, Zhigarev was one of the richest deputy of the last State Duma. Two dozen premium cars are recorded on his relatives, among which there are sports cars Maserati, Porsche, Bentley and several Mercedes. Their total cost is close to 100 million rubles. The most expensive and fastest specimens are from a retired mother. The ex-wife of Zhigarev, in addition to her car fleet, also owns expensive apartments in Moscow and land plots in the Moscow region worth about one billion rubles. Most of the foreign cars are registered in the name of the former wife of the parliamentarian - Natalya Anatolyevna Zhigareva. Since the end of the 90s, the deputy recorded almost all his cars on it.

In 2017, Natalya Zhigareva unexpectedly became a major landowner. She owns 300 thousand square meters of land in the Moscow region, southwest of Vnukovo airport. Only the cadastral value of this virgin land is 658.5 million rubles. The market price should be one and a half to two times higher.

As Rucriminal.info found out, Zhigareva received these possessions through a chain of transactions from MTK-Project and TD Silver, owned by Sergei Zhigarev and his mother Lydia Gavrina, as evidenced by the data from the SPARK-Interfax database.

Both of these firms have now been liquidated. Moreover, the first one ceased operations a year and a half after the transaction. The trading house "Silver", from which the former deputy wife received the land, was later also liquidated.

It is not yet clear where the ex-wife of the parliamentarian got that kind of money. Judging by the declarations of the deputy Zhigarev, she did not earn regularly, but a lot. In 2014, she received 61 million rubles, and her husband only 3.8 million. In 2017, the woman earned 26.3 million rubles, while the deputy himself only 4.2 million.

Nothing is known about the place of work of the deputy's wife and her official income. She only appears in the deputy's extracts as the owner of apartments, cars, land.

Zhigareva is not on social networks, and the only page with her name and suitable age has been cleared and renamed Mark Kuznetsov. So who is the multimillionaire Natalia Zhigareva? Could it be that the deputy Zhigarev simply hides part of his income and assets with the help of his ex-wife?

If Zhigareva did not pay for the land, then it turns out that the deal could be fictitious. In this case, it requires verification by law enforcement agencies. Perhaps, this could have been how they could hide parliamentary assets from prying eyes or legalize some kind of shadow income.

The practice of fictitious divorces to hide assets and not declare them is widespread in the ranks of the LDPR. As the source of Rucriminal.info notes, such a scheme could be used by the deputy Andrey Svintsov. His cell phone is used to pay for the parking of his ex-wife's Lexus SUV. And the governor of the Vladimir region, Vladimir Sipyagin, on the contrary, lives with his chosen one in a civil marriage, which gives him the right not to indicate her in the annual declaration.

Natalya Zhigareva is not the only person from the deputy's inner circle to whom the property is registered.

The most expensive cars formally belong to the parliamentarian's mother, 73-year-old pensioner Lydia Gavrina. It is believed that she brought her son into politics. Gavrina worked as deputy governor of the Krasnoyarsk Territory, Alexander Lebed, was his right hand.

At the end of the 1990s, Sergei Zhigarev, after serving in the Armed Forces of the USSR, was also hired to work in the apparatus of the Krasnoyarsk governor. Zhigarev was in charge of the Committee for Investments and Innovation Activities of the Territory Administration, and later headed the Main Directorate of the Economy and Industry of the region. At the end of the 2000s, Zhigarev was elected to the Moscow City Duma, and since 2010 he has been a deputy of the federal parliament.

A premium SUV Bentley Bentayga W12 worth 22 million rubles has been recorded on Gavrina. This British SUV accelerates to 100 kilometers per hour in 4.1 seconds and can reach speeds of 300 km / h. Everything in the salon is of the highest quality and is made according to the individual order of the owner.

It is interesting that the brand new Bentley car received a "beautiful" license plate U * TU777, which was previously used in a taxi and was assigned to the "Consultant" company. Apparently, her taxi drivers beat the rules: the company has accumulated fines for almost 42 million rubles. The organization has now been liquidated. The license plate has migrated to Bentley, but its aura has not changed - the car already has speeding tickets.

At the same time, several Zhigarevs' cars had "beautiful" numbers, and the M * MP77 sign, mimicking a series for special services, was used by the deputy with his ex-wife for different cars: BMW and Mercedes S450 and S500. This follows from the data of the traffic police database.

It turns out that Zhigarev's relatives do not have noticeable legal income, but they have expensive cars that they clearly cannot afford. If the luxurious Bentley Bentayga and Cadillac Escalade for the 73-year-old pensioner can somehow be explained, then her choice of supercars Aston Martin and Maserati raises big questions. To the cars should be added land near Vnukovo, the market value of which can reach one billion, as well as several apartments on Leninsky Prospekt worth almost 100 million. The question arises: where can a parliamentarian and his relatives have money for such expensive purchases?

Today Zhirinovsky is trying to do everything in order for the Presidential Administration to give the go-ahead for another quota in the region and Serney Zhigarev, a candidate for this quota, who is not the best model for our citizens.