A machine gun barrel was sticking out of a car window”

What is hiding Valery Gazzayev? 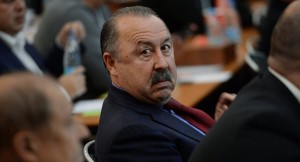 Rucriminal.info continues to acquaint readers with the materials of the case of the bloodiest “authority” group, Aslan Gagiev, nicknamed Dzhako. In this publication, we will provide testimonies of important witnesses in the case of the murder of Alexander Slesarev, his wife and 15-year-old daughter. Details of the terrible crime during interrogation were told by the relatives of the wife of Alexander, who were with them at the time of the execution. Investigators took more than 10 years to solve the murder. And they could have done it much earlier. For this it was necessary that the whole truth was told by Slesarev’s only close friend, a person who is a member of the family and dedicated to her secrets, the current chairman of the State Duma Committee on Nationalities Valery Gazzayev. The fact that Valery Gazzaev, to put it mildly, does not tell the whole truth about his relations with banker Alexander Slesarev, it becomes clear from the protocol of the interrogation of the former coach of the Russian national team. The interrogation was conducted as part of the murder of the shadow banker Slesarev and his entire family, including his 15-year-old daughter, in 2005. It turned out that, sensing danger, Slesarev began to hide his assets. He re-registered part of them. Who do you know? On his friend Valery Gazzayev. Two houses belonging to the family of a banker were copied to the coach. Later, Gazzaev re-registered one house for Slesarev’s mother-in-law. And after the murder of Slesarev, Gazzaev rewrote the second house on the son of a banker. During this interrogation trainer, he assured that he did not know anything about Slesarev’s business, he didn’t conduct any business with him. However, the investigators had other data - that Gazzaev and Slesarev had common business in the banking business (Slesarev was actively involved in money laundering). The then chief Gazzaev, owner of CSKA Evgeny Giner, also actively participated in these matters. Moreover, after 10 years it was found that Slesareva was shot by a gang of Aslan Gagiev (Dzhako). Dzhako, like Gazzayev, a native of North Ossetia, the operatives had evidence that they were well acquainted with each other.

The testimony of witness Kovyrkin M.E. dated October 20, 2005, according to which he worked as a driver in the Slesarev family and on October 16, 2005 at 0845 hours together with members of the Slesarev family in two cars they left Moscow for Stary Oskol, Belgorod Region. He drove a Mitsubishi Pajero Sport car with state registration plates А 983 АМ 97 Rus, in which Mikhailovsky AA was in the front passenger seat, and mother Vera (Kartashova VV), who served as a nun in Sergievo, was in the back seat. Pechora Lavra. Slesarev A.Yu. was driving a Mersedes E200 car with state registration plates Р 581 УВ 97 Rus, the wife of Slesarev A.Yu was in the front passenger seat - Slesareva N.A., in the back seat - Mikhailovskaya S.A. and daughter Slesareva A.Yu. - Slesareva E.A. Moving in two cars, they reached the Moscow Ring Road and turned onto the Moscow-Don highway, while Slesarev A.Yu. The Mercedes E200 followed first. After a while, he heard a loud hum of the engine and, turning to the right, saw that his car was overtaking another black car, whose rear window was ajar, and the gun barrel was sticking out of the window. Then he heard automatic shots, immediately pressed the brake and slowed down the car. Mikhailovsky A.A. at the same time he jumped out of the car, and Kartashova V.V. was wounded. He himself ran to the Mercedes E200 car, where he saw that Slesarev A.Yu. is dead.

The testimony of the interrogated as a victim, Mikhailovsky A.A. from 10.27.2005, according to which Slesareva N.A. - wife of Slesarev A.Yu. he had a sister, he maintained family relations with the Slesarev family. About 2-4 times during the year Slesarev A.Yu. I went with my family to a monastery located in the city of Stary Oskol, Belgorod Region. Daughter Slesareva A.Yu. - Slesareva E.A. studied in England and was supposed to come to Moscow on vacation on October 15, 2005. For her, Slesarev A.Yu. planned a trip to Stary Oskol on October 16, 2005. On October 16, 2005, at about 9 o’clock, they left Moscow in the direction of Stary Oskol in two vehicles: the Mitsubishi Pajero Sport with state registration marks A 983 AM 97 Rus and the Mercedes E200 with state registration marks R 581 UV 97 Rus. Slesarev A.Yu., Slesareva N.A. were driving a Mercedes E200 car. Slesareva EA and Mikhailovskaya S.A., which is a cousin of Slesareva E.A. He was driving a Mitsubishi Pajero Sport car (in the front passenger seat), driver M. Kovyrkin and nun Kartashova V.V. (in the back seat).

Car Slesareva A.Yu. rode in front, often breaking away from them by 200-300 meters. About 30-40 minutes after leaving the house, when they were already moving outside the Moscow ring road in the Moscow region, glass fell on the right side of the car and shots were fired from an automatic machine. He felt a sharp blow to the back of his head, which made his eyes darker, after which he heard solitary deaf shots, which then ceased. Kartashova V.V. lay motionless. As a result of the shooting, he was injured in the occipital region of the head.

The testimony of the victim Mikhailovskaya S.A. from 10.12.2015, 12.24.2015, according to which Mikhailovsky A.A. has to be her father, he died 05/05/2015, Slesareva N.A. - the wife of Slesarev A.Yu., she is her own aunt. On October 16, 2005, at 09 o’clock, they left Moscow: Slesarev A.Yu. drove a Mersedes E200 car with state registration plates P 581 HC 97 Rus (behind the wheel), Slesareva N.A. (sat in the front passenger seat), their daughter E. Slesareva and she (sat in the back seat). On the Mitsubishi Pajero Sport SUV with state registration plates A 983 AM 97 Rus under the control of the driver M. Kovyrkin, her father, Mikhailovsky A., drove behind them. (sat in the front passenger seat) and nun Kartashova V.V. (sat in the back seat). They drove at a speed of 140-120 km / h. depending on traffic density. On the road section, where the carriageway is divided by a dividing fence about 50 cm high, A.S. Slesarev’s car moved in the far left lane, at that time the Audi A8 car caught up with them, from which, after a stop, a man got out and opened fire towards A. Slesarev. As a result of the shooting, she received a gunshot wound to her chest.