Rucriminal.com publishes a document based on which a famous singer and athlete do not give a visa... 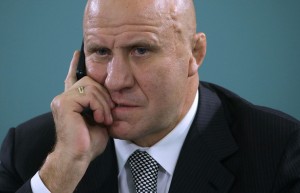 Rucriminal.com returned to a secret report of Interpol, comprising intelligence information, reports of national offices of various countries, materials "wiretaps" and surveillance against people from Russia (primarily members of the Solntsevo) and related persons, including plenty of big businessmen, former and current officials. In the sixth article we present a number of persons from the list of persons associated with the Mafia, but it is extremely remarkable. This singer and State Duma deputy Iosif Kobzon and President of the Russian Wrestling Federation Mikhail Mamiashvili. According Rucriminal.com, on these data, collected in 2000, most countries rely when denied visa to Kobzon and Mamiashvili.

"Solntsevo criminal group also has links with other criminal groups:
Monya Elson
US / Italy
Investigations carried out by the Italian authorities have identified a link between "thief in law" Monya Elson or "Moni", a nickname "Daddy" (dob May 23, 1951, Chisinau, Moldova) and the Solntsevo, including the organization of Mogilevich.
In New York (USA), he was one of the main representatives of the Eastern European organized crime. His organization "Brigade Moni" played a major role in controlling the export of diamonds, gold and jewelry from the United States and other countries to Russia. Elson has also been associated with the manipulation of excise tax on oil, extortion, drug trafficking and counterfeiting of visas. In order to avoid arrest in the United States and reprisals Ivankov, Elson moved to Italy, where he organized his own gang. The group was engaged in money laundering through the furniture, gold and other assets.
March 8, 1995, he was arrested by the Italian authorities in connection with extradition to the US. It is responsible for three murders, two attempted murders and drug trafficking. Were arrested five Russian nationals, who were charged with criminal conspiracy with a view to re-invest the proceeds of crime in Italy, among them Joseph ROYZIS Aronovich (dob 6 August 1947), which was also associated with the Solntsevo criminal group, including the organization of Mogilevich.
ROYZIS, nicknamed "Grisha Cannibal" or "Gregory", a citizen of Ukraine and the United States, the head of a criminal group, was again arrested on 26 February 1999 in Italy ( "Operation Ogre"). 11 international warrants were issued for the arrest on charges of extortion and criminal ties, aimed at acquisition of control over certain economic sectors, such as the import and export of commercial goods between Italy and the former Soviet Union. One of these orders was presented Vyacheslav Melnikov (b. March 16, 1961 in Russia), which was one of the leaders of the Solntsevo gang, killed in Moscow in February 1999. Joseph ROYZIS also associated with the "thief in law" Vitaly IZGULOVYM (dob 11 October 1959), the leader of the gang of Bratsk (for more information please contact the General Secretariat of Interpol and Interpol in Rome).

Kobzon Iosif Davidovich is a member of the Duma and the popular Russian singer, as well as a rich businessman. In 1995, after the arrest of the Jap he was denied entry into the United States. According to reports, he was associated with Jap. At the request of Kobzon, the Russian secret service gave him a certificate that shot with his suspicion of involvement in drug trafficking, antiques and jewelry and money laundering. There is evidence that he is the owner of the company "Muscovy", inherited from Kvantrishvili Otari.
KOBZON is "prestige" associated in Russia with influential persons. It carries out illegal requisitions from artists. It is not a party to Solntsevo and other Mikhailov. KOBZON created a charitable fund for police officers and their families, along with his best friend KANTRISHVILI.
"XXI Century Fox" - Association / holding company headed by Anzor KIHALISHVILI and Iosif Kobzon. KIHALISHVILI could not take a seat in the Duma in 1999 and was denied the right to run for president in 2000. Kobzon and Kvantrishvili Otarik killed in 1994, were co-founders of this charitable organization dedicated to money laundering. Kvantrishvili headed the criminal organization the athletes' Otarik "headed by Mamiashvili now stands, a former Russian colonel and former bodyguard Kvantrishvili.After the murder of his Kvantrishvili athletes began to cooperate with Mikhailov and pay "common fund" Solntsevo criminal group. However, they remained independent and continued to work with Kobzon (see. Section "Grouping Mamiko).