"The head was chopped into pieces"

The family did not forgive the secret killer operative 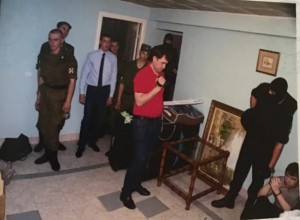 Rucriminal.info continues to publish confession statements of the former Moscow policeman Ruslan Yurtov. "Authority" Aslan Gagiev (Dzhako) accepted Yurtov into his group (Semyu), put him in the police, took him to full maintenance and gradually began to involve the organized criminal group in the murders until Ruslan became a killer of the brigade. His mentor and senior friend in the Family was Maxim Nikolaev, an employee of one of the classified divisions of the Moscow Region Main Internal Affairs Directorate. Nikolaev was a member of the brigade of "authority" Sergei Beglaryan and was in the first roles in many murders. He personally strangled, cut the victims, fired at them with a cannon, and demanded that others kill. At some point, Nikolaev and Beglaryan decided to separate from the Family, and then it was their turn to die. Jaco did not show that he was not pleased with the apostates. Once Nikolaev and Yurtov brought armor-piercing cartridges to the Family's office. Taa was personally waiting for him, Jaco and almost all night voluntarily and forcibly interrogated. Gagiev believed that Nikolaev and Beglaryan wanted to kill him personally, as well as the wanted family members. In the morning he invited everyone to move to the dacha. Nikolaev knew perfectly well what that meant. One or two people did not return from such trips. He tried to escape, but was caught and tied up. At the dacha of Nikolaev they strangled, the body was dismembered and scattered in different parts of the Moscow region and neighboring regions. 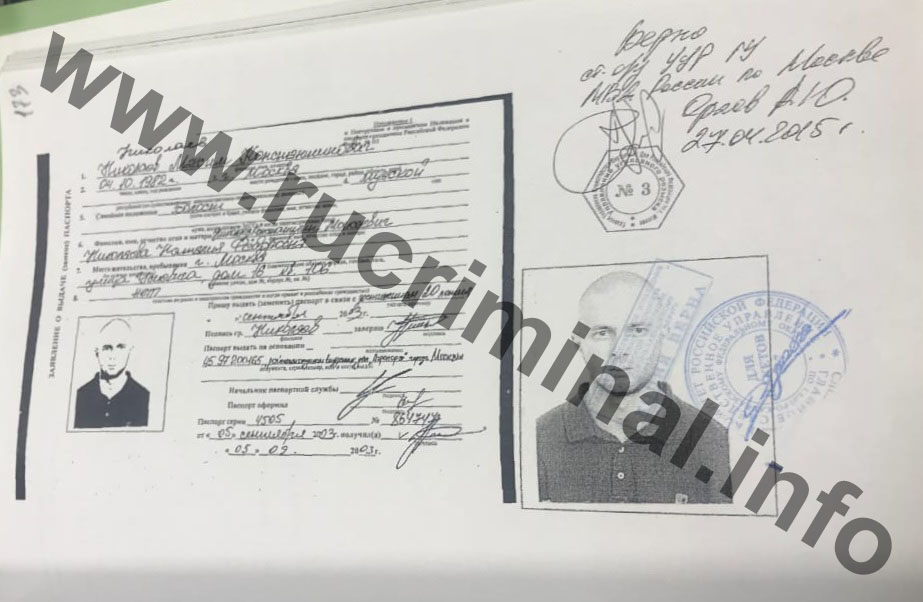 “At the beginning of April 2009 he, Gagiev O.S. and Dzhussoev A.N. were detained in Moscow. He was held in a pre-trial detention center for about six months, after which he was released. After his release, he learned that S.L. Beglaryan. and Nikolaev M.K. already practically did not communicate with A.M. Gagiev. and moved away from the "Family", some conflicts arose between them. In December 2010, he and Nikolaev M.K. arrived at the base on Karyer Street in Moscow, as the latter had brought armor-piercing cartridges for the needs of the "Family". Gagiev A.M., Dzhioev A.B., Gutiev U.Kh., Gobozov M.S., Dzhioev G.R., Yashkin E.I., possibly O.N. Alymov were at the base. nicknamed "Gypsy", Dudiy I.A. nicknamed "Garik", Staykhevich A.V. nicknamed "Stas" and Dzugutov G.Z. nicknamed "Zhokha". Him and Nikolaeva M.K. immediately searched, took the phones. Gagiev A.M. began to talk with M.K. Nikolaev, began to make claims to the latter, accusing that M.K. and Beglaryan S.L. want to kill persons who are on the wanted list, namely: Bagaeva R.A., Zasseev I.I., Kudziev T.M., Slonov G.G., as well as A.M. Gagiev himself. The conversation went on almost all night, then A.M. Gagiev. calmed down and said that they should go to the dacha, where the wanted Bagaev R.A., Slonov G.G., Kudziev T.M. lived. and they should live there for several days until he communicates with S.L. Beglaryan. They went out into the street, where there was a blue Volkswagen minibus, and at that moment M.K. abruptly ran to the side, there was a minibus "Volkswagen" under the direction of Yashkina E.I. rushed after Nikolaev M.K. He was ordered by A.M. Gagiev. got into the car of Dzhioev G.R. "Toyota Camry" black. A few minutes later a Volkswagen minibus arrived, from which AB Dzhioev got out, sat down in the back seat, saying that MK Nikolaeva caught. Dzhioev G.R. got behind the wheel of the car, and they drove off, while Dzhioev A.B. told him to bend his head to his knees so that he could not see the route to follow. They drove for about 2 hours, he was brought to a country dacha, where he was for the first time. Nikolaeva M.K. led through the garage into some empty room, the latter's hands were tied with something. Nikolaev M.K. was lying in one corner of this room, he was put in another corner, but his hands were not tied. Further to Nikolaev M.K. and they tied his legs with tape, and the hands of M.K. untied. They sat in the room with M.K. Nikolaev. all night and the whole next day, but no one left them alone, constantly one of the guys was present. After some time, Kudziev T.M., Bagaev R.A., Zasseev I.I., Slonov G.G., Dzhioev A.B., Gutiev U.Kh. entered their room, they attacked M. K., knocked him down, held his hands, put M.K. on Nikolaev. a bag on the head, someone wrapped the bag with duct tape. They kept Nikolayev M.K. until he stopped showing signs of life, you could hear it from the sounds. Him Gagiev A.M. said to live at this dacha until they find S.L. Beglaryan. The next day, one of the guys who were present told him to help I.I. Zasseev. and Bagaev R.A. He went down to the garage, where he saw the body of Nikolayev M.K. with a bag on his head, the garage was already covered with oilcloth. I. I. Zasseev and Bagaev R.A. from the corpse of Nikolaev M.K. They cut off the clothes and the bag from the head, began to dismember the corpse with axes and knives, after placing logs under it. The arms and legs were separated from the body and cut at the joints, the body was not cut. The head, as he understood, had also been chopped to pieces so that it would be impossible to identify. After the dismemberment of the corpse, the fragments were laid out in polymer bags, while he himself held the bags, wrapped their necks with tape. Fragments of the corpse of M.K. Nikolaev loaded into a Volkswagen minibus, into the luggage compartment of a black Mercedes 221 and a gray Nissan Almera classic. Then they went to the territory of the neighboring Moscow region, where they threw away the body of MK Nikolayev's corpse, and doused the rest of the body with fuel in another place and set it on fire. Around February-March 2011 he, Gutiev U.Kh. and Yashkin E.I. at the direction of A.M. Gagiev went to look for the remains of MK Nikolayev's corpse to hide them. They found only the body from the corpse of M.K. Nikolaev. and buried him in the forest. " 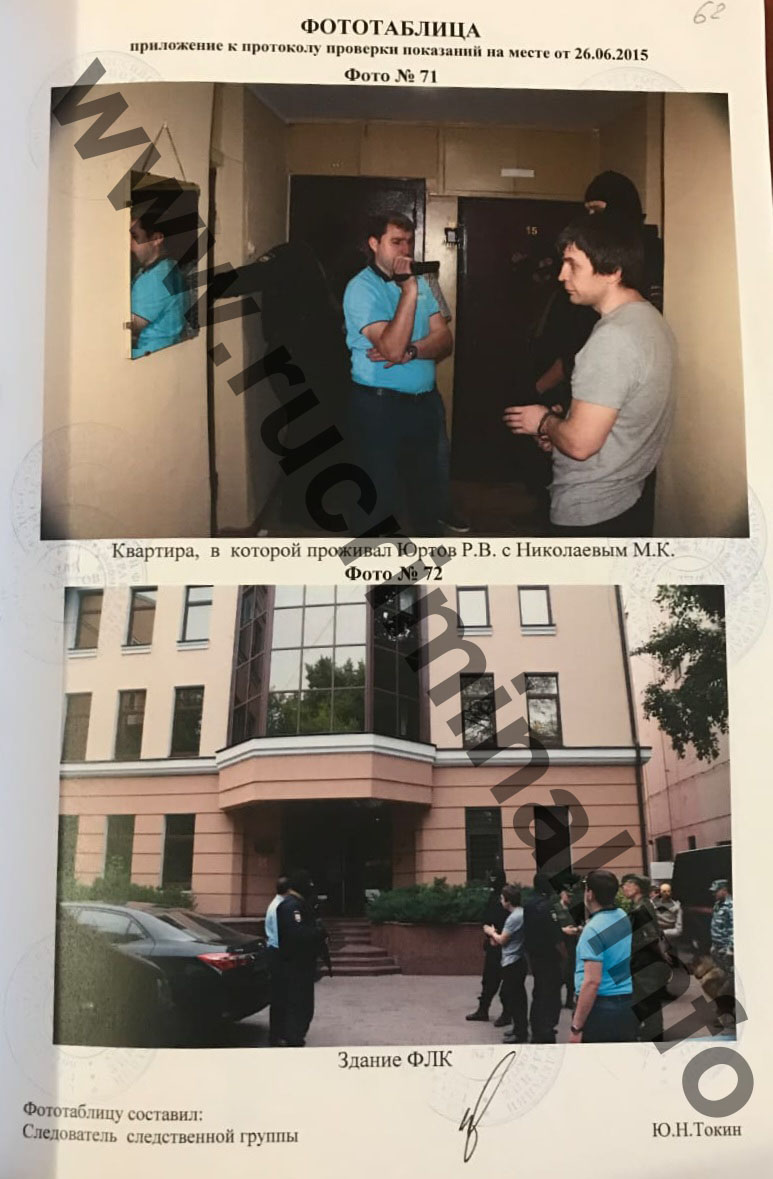 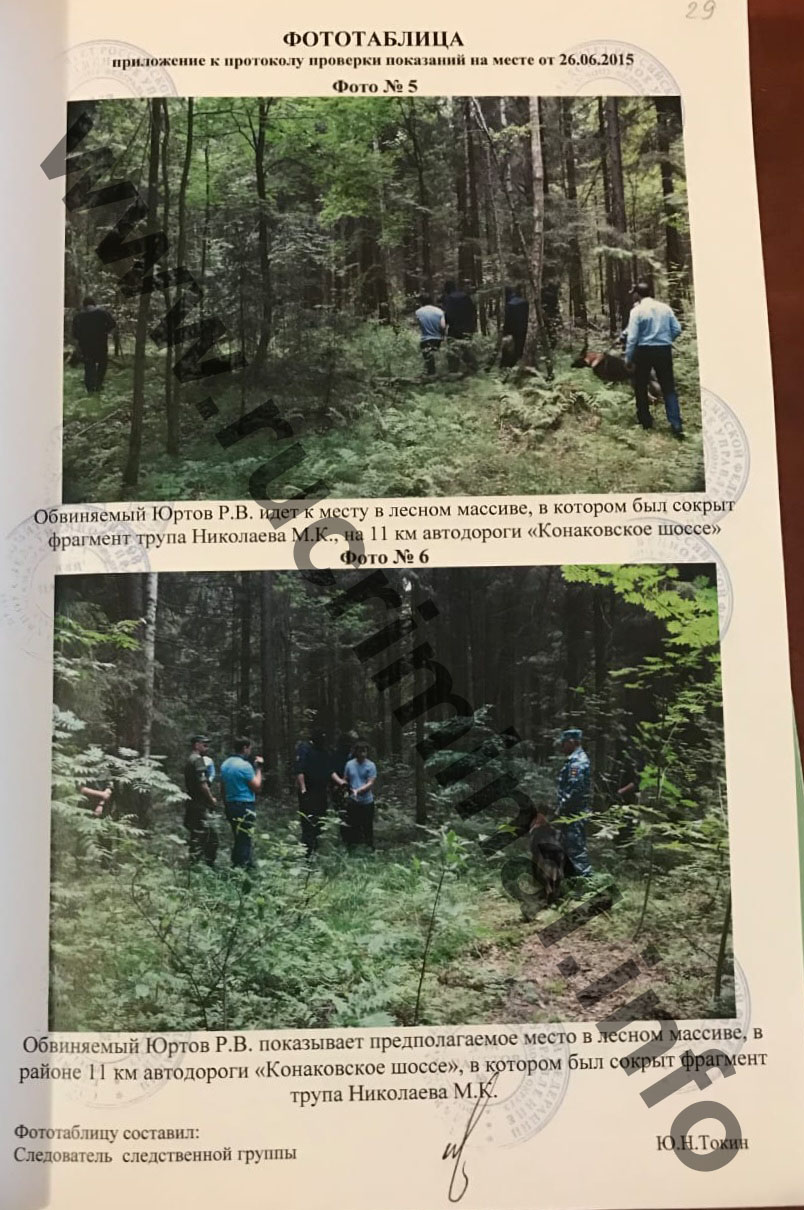 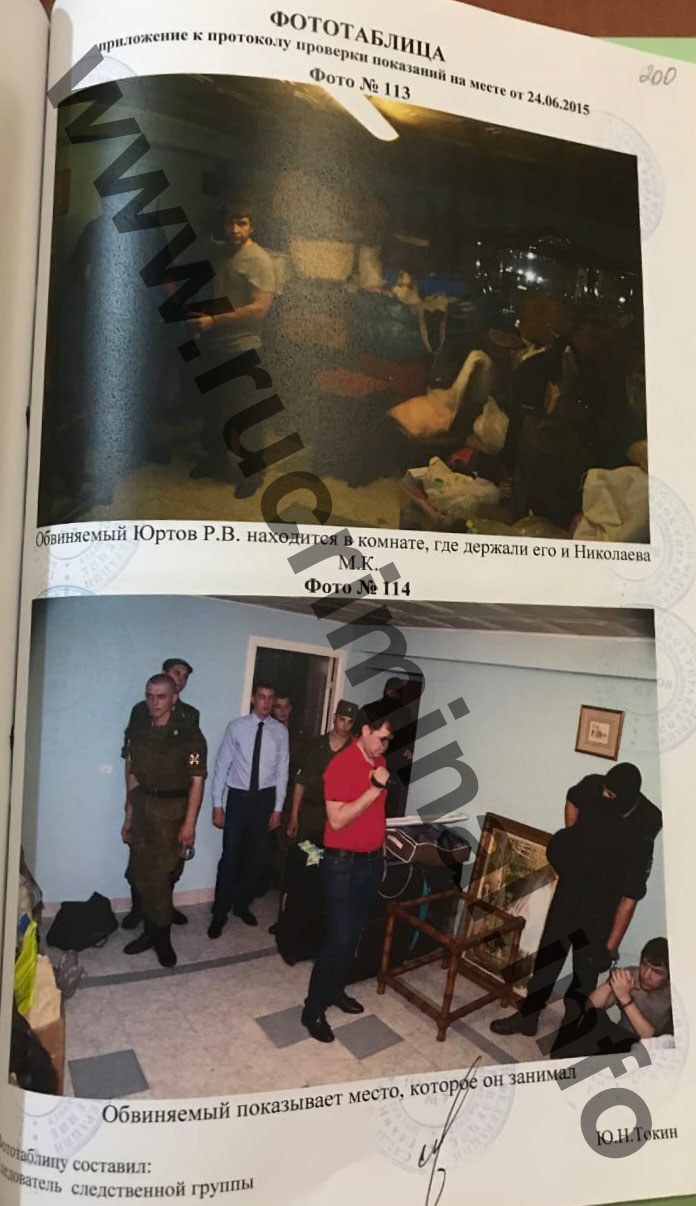