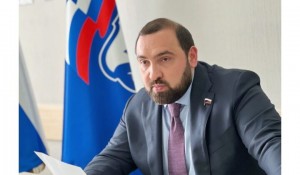 In Dagestan, the focus of attention was the scandal with Yan Ivanov, a member of the local Public Chamber who resigned, and Biysultan Khamzaev, a State Duma deputy from Dagestan, who is being patronized. A 26-year-old guest performer from Moscow became a public figure under false documents. The fact of forgery was indicated in a request to the Prosecutor's Office of Dagestan from the coordinating council of the NPO of the republic, after which, without waiting for the prosecutor's order, Khamzaev recommended Ivanov to merge ahead of schedule so that the deputy himself would not become the object of a negative agenda. Details - at Rucriminal.info.

Biysultan Khamzaev is a very controversial person. His active propaganda against the distribution of alcoholic products is very discordant with the beginning of his working career at a distillery in the Moscow region. Khamzaev ended up at the alcoholic shop in Lyubertsy, owned by the ex-senator of Dagestan Atay Aliyev, only because he was afraid of blood feud by the relatives of a native of the Khasavyurt district killed by his own mother. The Khamzaev family was saved from mortal danger by the late former head of the Khasavyurt district, Alik Alkhamatov, who not only hushed up the initiation of a criminal case, but also asked Atai Aliyev to attach the Khamzaev family to his distillery in Lyubertsy. After some time, the father and son of the Khamzaevs lost their employer's trust in connection with embezzlement in the financial unit of the enterprise - the money had to be taken by force to the son and nephew of Atay Aliyev. The Khamzaevs were saved from physical punishment by Moscow fixers from Dagestan. After the fiasco with the wine and vodka business, Khamzaev, together with his father, goes to the Lytkarinsky fuel and lubricants plant, where he also manages to pull off a fraud in the financial activities of the enterprise. Then there were frauds with medical equipment and kidnapping of buyers of medical equipment, who paid Khamzaev 4 million rubles in advance.

Biysultan Khamzaev earned his first capital in the elections to the State Duma in the Pskov region, where he happened to play the role of a “satellite” for a passing candidate, creating the appearance of an opposition candidate. The money received was then transformed into a house near the Pirogovsky reservoir in Mytishchi.

In the current deputy convocation of the State Duma from Dagestan, Khamzaev appeared at the very last moment. And only for the reason that Mamed Abasov, who was going to the deputy, did not fulfill his obligations to the head of Dagestan, Sergey Melikov, - earlier they agreed on certain conditions in the La Bottega Siciliana restaurant, the fulfillment of which would promise Abasov a deputy mandate. But, in the end, the latter refrained from the deal and Sultan Khamzaev took the burning place.

According to the source of Rucriminal.info, Sultan Khamzaev's style of behavior in the status of a deputy is maximally adapted to the phalanx of populism.

And, the most ridiculous thing is that Yan Ivanov, who had been showing off for several months in Dagestan, was awarded "for many years of fruitful work" by Sergey Melikov, who was firmly entrenched in the last places in the governor's ratings. For this, the head of Dagestan should also be grateful to Biysultan Khamzaev, who positions his activities as work in tandem with the head of Dagestan.