Generals of the Feast under Grigory Leps By 2007, Yuri Alekseev was considered an extremely rich man, with all the ensuing attributes: cottages, large apartments, etc.in April 2007, he threw an unprecedented celebration on the occasion of his birthday, which did not even dream of the notorious members of the "Prosecutor's mafia" from the Moscow region. One of the participants of the celebrations Alexeyev was the interlocutor Rucrimimal.info and we decided to bring his story.

"The celebration took place in an expensive Italian restaurant located near the Moscow city hall. And he was fully occupied, the door hung a sign "private party". In the hall there were about 120 people on a small stage in turn performed pop stars. Among them, I remember the group "Ivanushki international", Grigory Leps, Alexei Glyzin. After the performances, the stars sat down at the tables. Of the celebrities were still Emmanuel Vitorgan. The tables were literally heaped with food: caviar, fish, pigs, the most expensive and elite alcohol, etc. All in unlimited amounts. We congratulated Yuri Fedorovich and sat down at a table. After this приятельRucriminal.info began to tell whom he knows from present. At one table sat people with Shabalovka for others - from some ORB, etc. Then a friend showed the farthest table, which held an obvious bandits.  He said it was the color of the criminal underworld. And I began to list the names of "authorities" "thieves in law". I have been to many such events, but I have never seen so much."

We managed to find people who remember some stages of Yuri Fedorovich's path to such wealth. According to them, prosecutors Alekseev left for discrediting circumstances, but managed to settle in the Investigative Committee at the Ministry of internal Affairs. Here he immediately launched a stormy activity. When Alekseev was the Deputy chief of the Investigative part-the head of the 1st Department of the IC at the Ministry of internal Affairs in his subordination was investigator Danilkin (now a judge). At Danilkin in production there was a case of large fraud accused on which there was a former employee of SVR. The retired intelligence officer did not want to pay for a long time, as a result the indictment in the case went to the Prosecutor General's office for approval. It would seem that nothing can be done. But not in the case of Yuri Fedorovich. The former employee of SVR on the eve of New year forked, Alekseev shared profit with colleagues. When the holidays were over, it turned out that from the closed safe Cabinet 2nd floor of the fourth building of the IC at the Ministry of internal Affairs lost two volumes of the case. The ones about the retired scout. Access to the safe was only Alekseeva Danilkin. But they categorically denied having carried Tom out. Big scandal broke, the official investigation conducted by the first Deputy chief SK at the Ministry of interior Mikhail Zotov dire aversion to Yuri Fedorovich. The question was about the dismissal, but Zotov was not able to expel erring subordinate. And later he was forced to leave the UK. Missing from the safe materials could not be restored and the case of fraud died. And Alekseev continued to build his career.

By this time he, according to Rucriminal.info, already closely communicated with the employee of gubep of the Ministry of internal Affairs of the Russian Federation Mikhail Karapetovich Sarkisyants (better known as karapetych), the person, in own way unique. In the late 90's-early 2000's it was the largest solver in the interior Ministry, he commanded not only the majority of employees of gubep, but also a number of investigators of the IC at the interior Ministry, because it was under his protection they got their positions. Karapetich barely hiding took bribes for solving different problems of business and successfully these problems were solved. "Birds of a feather" see from afar. Therefore, it is not surprising that at one point of life Karapetich and Yury Fedorovich became close companions in the business of mastering tricks. Their cooperation, according to our interlocutors, continued until 2004. Then in the system gubep-DEB appeared more influential fixers and ways Alekseeva Sarkisyants dispersed. 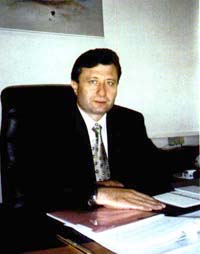 In addition to patrons in the law enforcement system and intelligence agencies, Yuri Fedorovich has an "angel guardian" in the business environment. So the source Rucriminmal.info call businessman Alex Sekler once were part of the entourage of the oligarch Boris Berezovsky. And, according to sources, in a bunch of Alekseev-Sekler the dominant role is taken by the last (according to some data they continue to communicate still).Sclera tried to select those or other enterprises, and immediately came to the aid of Yuri Fedorovich, exciting things to the offenders Alex. Biggest fight of Sclera turned in 2003-2004 with another former close Berezovsky by Anatoly Blinov. Alex, decided that pancakes "threw" a few of his structures, including the Bank's "Image" and NPO "Plastic". Other victims in this story would partner Celera business Basil Piganov. Together they "charged" not only Yuri Fedorovich, but representatives of Genprokuratury. On Blinov opened criminal case. And the Deputy Prosecutor General Yury Biryukov issued the order that procedural control of investigation will be exercised by the Deputy chief of SK Alekseev. This is despite the fact that the control was to be engaged at that time the direct head of police investigators, the head of The investigative part of the IC at the Ministry of internal Affairs Valery Syzrantsev. As a result, Blinov was sent to jail, and then Yuri Fedorovich decided to play a collector of compromising on the highest ranks of the Russian Federation. On personal initiative or at someone's request, he ordered the investigator in this case, not under the Protocol to take Blinov's testimony, how many and to whom bribes Berezovsky and people from his environment, about the relationship of the oligarch with the authorities, etc.. Pancakes in jail for a long time wrote it on paper, then put the date and signature. The leaves with the dirt was transferred to the immediate Yury Fedorovich