Ex-prisoner Evgeny Dod "climbed" into the Arctic zone of Russia Former prisoner and ex-head of RusHydro Yevgeny Dod began a new campaign for large projects and big money. As it became known to Rucriminal.info, the company Segezha Zapad headed by him (engaged in the study of investment projects in the forest industry, is part of AFK Sistema), right before the New Year, became a resident of the Arctic zone of the Russian Federation, for which, by decision of the President of the Russian Federation, the federal part was reset income tax benefits. Dod's past similar campaign, when he headed RusHydro, led to the fact that the head of state was deceived for several years, hiding a major catastrophe from him. And all so that Dod and his team members could replenish their own pockets. For this he sat down, but not for long. He was quickly released, and over time, the case was quietly closed. And this is where the fun begins. According to sources, the operatives received information that the termination of the case coincided with the fact that Dod himself became poorer by 300 million rubles. To this we can add that initially the investigation into Dod was conducted by the scandalous investigator Ruslan Miniakhmetov, who initially planned to bring charges against Dod over a whole series of episodes, including covering up a man-made disaster at the Zagorskaya PSHPP-2 in the Moscow Region. And then Miniakhmetov suddenly changed his mind ... We're not talking about the special relationship between Doda and Karina Turcan (when both worked at Inter RAO), who was recently convicted of espionage. And now Dod has "climbed" into the Arctic zone, which means nothing good should be expected. To understand who Dod is, you can look at the certificate of the Office of the FSB of the Russian Federation on him, which is published by Rucriminal.info. 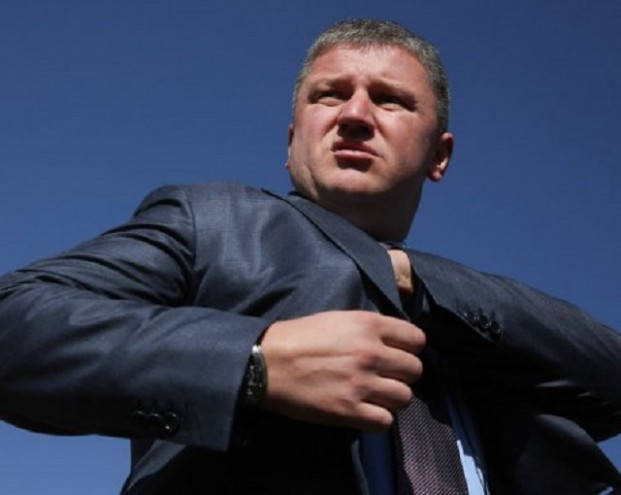 We will remind, Evgeniy Dod was arrested in the summer of 2016. According to the investigation, Dod made a distortion of information about the company for 2013, not reflecting paper losses in the amount of 12.4 billion rubles in RusHydro's financial statements. At the same time, Dod signed an order on special bonuses for the company's top managers, unreasonably increasing the size of his bonus by at least 73.2 million rubles. Initially, Miniakhmetov was going to add similar charges for other years. The Investigative Committee also actively worked out materials about Dod's concealment of the scale of the man-made disaster at the Zagorskaya PSHPP-2 in the Moscow Region. He withheld this information from the head of state, so as not to display in the reporting the losses of 60 billion, which are necessary for the restoration of PSPP-2, and to write himself huge bonuses. A secret witness told about this in detail.

By the time of his arrest, Dod was clearly playing: he lived with three women at the same time and spent millions of dollars on them, actively participated with Prokhorov in financing the opposition, and set up a cozy "nest" outside the Russian Federation. Now Dod's story has entered the second round. We publish a "closed" report of the FSB of the Russian Federation in relation to Dod. He was born on June 21, 2016. And the next day the ex-head of RusHydro was detained.

4 Services of the FSB of Russia

on the detection of signs of a crime

I report in accordance with Art. 143 of the Code of Criminal Procedure of the Russian Federation that during the conduct of operational-search measures, the 9th Department of the "P" Department of the SEB of the FSB of Russia established that the Chairman of the Board of the open joint-stock company Federal Hydro-generating Company - RusHydro (now the public joint-stock company Federal Hydro-generating Company - RusHydro ", Hereinafter -" RusHydro ") citizen of the Russian Federation Dod Evgeny Vyacheslavovich, born on April 17, 1973, elected to the position on November 24, 2009, and chief accountant - head of the corporate accounting and reporting department at RusHydro, citizen of the Russian Federation Dmitry Vladimirovich Finkel, Born on 13.12.1977, appointed on the basis of the order of the Deputy Chairman of the Board of RusHydro No. 102p dated 15.03.2010 and an additional agreement dated 14.05.2010 to the employment contract dated 15.03.2010 No. 62, in 2014 by prior agreement with unidentified persons committed theft of RusHydro property on an especially large scale.

In particular, it was established that in the period from 01.01.2014 to 28.02.2014 in Moscow Dod E.V., Finkel D.The. and unidentified persons, in violation of the Accounting Regulations “Accounting for Financial Investments” PBU 19/2, falsified the report on financial results and the balance sheet of RusHydro for 2013, unlawfully overstating the amount of the company's net profit to the amount of 35,321 million rubles. knowing that the net profit of RusHydro for 2013, due to the depreciation of the market value of shares of subsidiaries of JSC RAO Energy Systems of the East, JSC Yakutskenergo, JSC Far Eastern Energy Company, amounted to no more than 28,000 million rubles ...

Finkel D.V. continues to work in the position of chief accountant - head of the corporate accounting and reporting department of PJSC RusHydro (Moscow, Malaya Dmitrovka st., 7).

Owned by E.V. Doda, Finkel D.V. and their relatives real estate objects in Russia and abroad, the high level of income at the present time, will allow them to hide from the investigation for a long time, including outside the Russian Federation, without worrying about the source of livelihood for themselves and their families.

According to the available operational information, after repeated sending of official inquiries to PJSC RusHydro, including those concerning the accounting activities of the company, Finkel D.V., possibly in order to avoid liability, urgently decided to leave the Russian Federation, presumably, to Greece.

In addition, according to the available operational information, currently Dod E.V. initiated the sale of vehicles belonging to his family, which indicates plans to leave the territory of the Russian Federation in order to avoid criminal liability.

In addition, in the course of operational-search activities it was established that in accordance with the oral instructions of Doda E.The. Finkel D.V. and other unidentified persons, possibly involved in the crime, PJSC RusHydro is taking measures for the targeted destruction of electronic media, as well as documentary materials containing information about the facts of illegal activities of E.V. Doda. and his inner circle.

The owner of PJSC "Quadra - Power Generation", where Dod E.The. holds the position of Chairman of the Board of Directors, is M.D. Prokhorov, at the same time owns the media holding "RBC".

In order to avoid criminal liability, Dod E.The. and Finkel D.V. will attempt to attract the media to compromise law enforcement agencies.

In addition, according to the available operational information, Dod E.V. and Finkel D.V. there are contacts from among the employees of law enforcement agencies, including those carrying out operational-search activities, in the executive authorities of the Russian Federation. Using the communication data, Dod E.V. and Finkel D.V. can exert pressure on the course of operational-search measures and investigative actions.

Thus, according to the available operational information, Dod E.The. and Finkel D.V. plan to hide from the investigation and the court, as well as to interfere with the criminal proceedings on the fact of theft of property of PJSC RusHydro, if it is initiated. 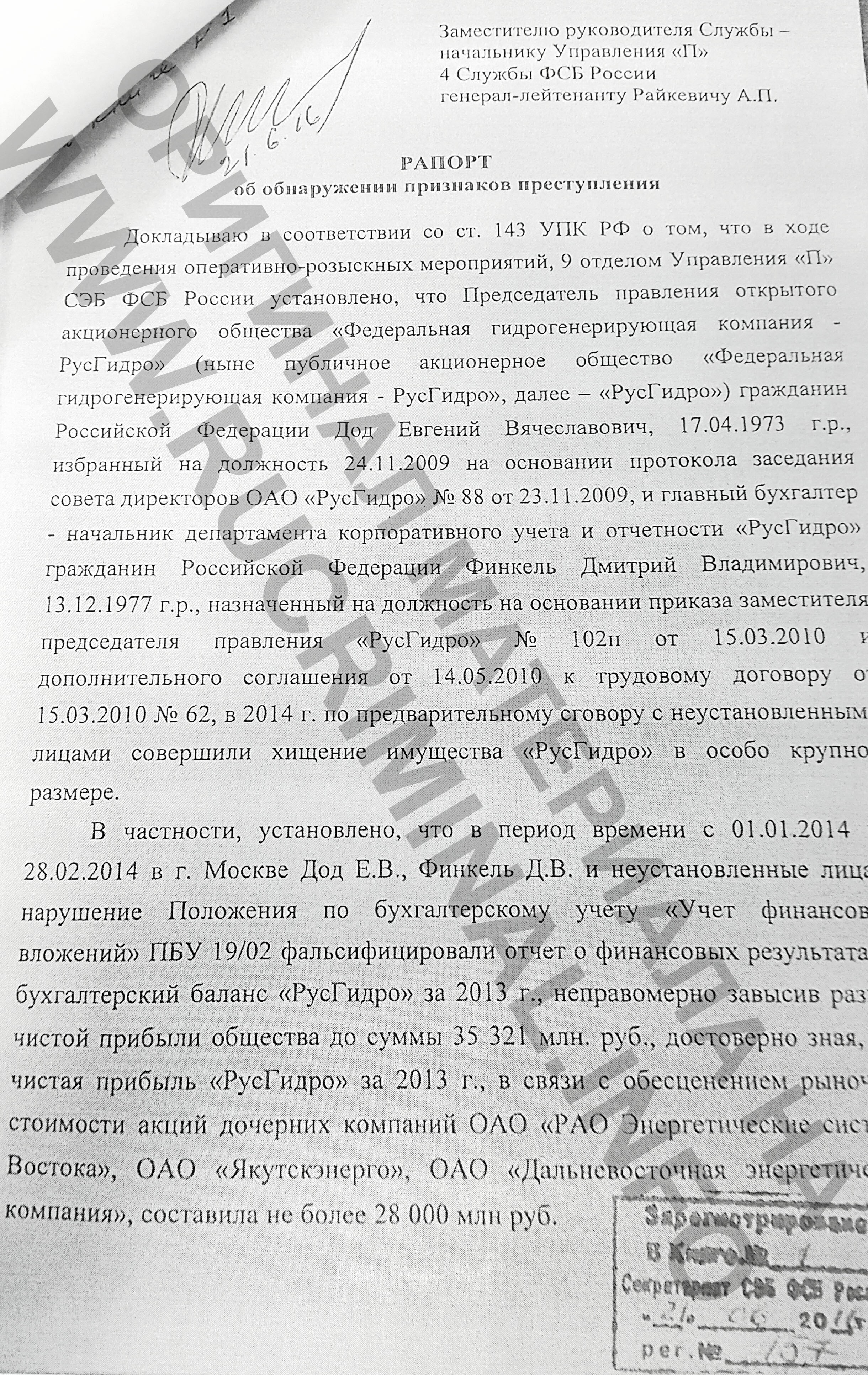 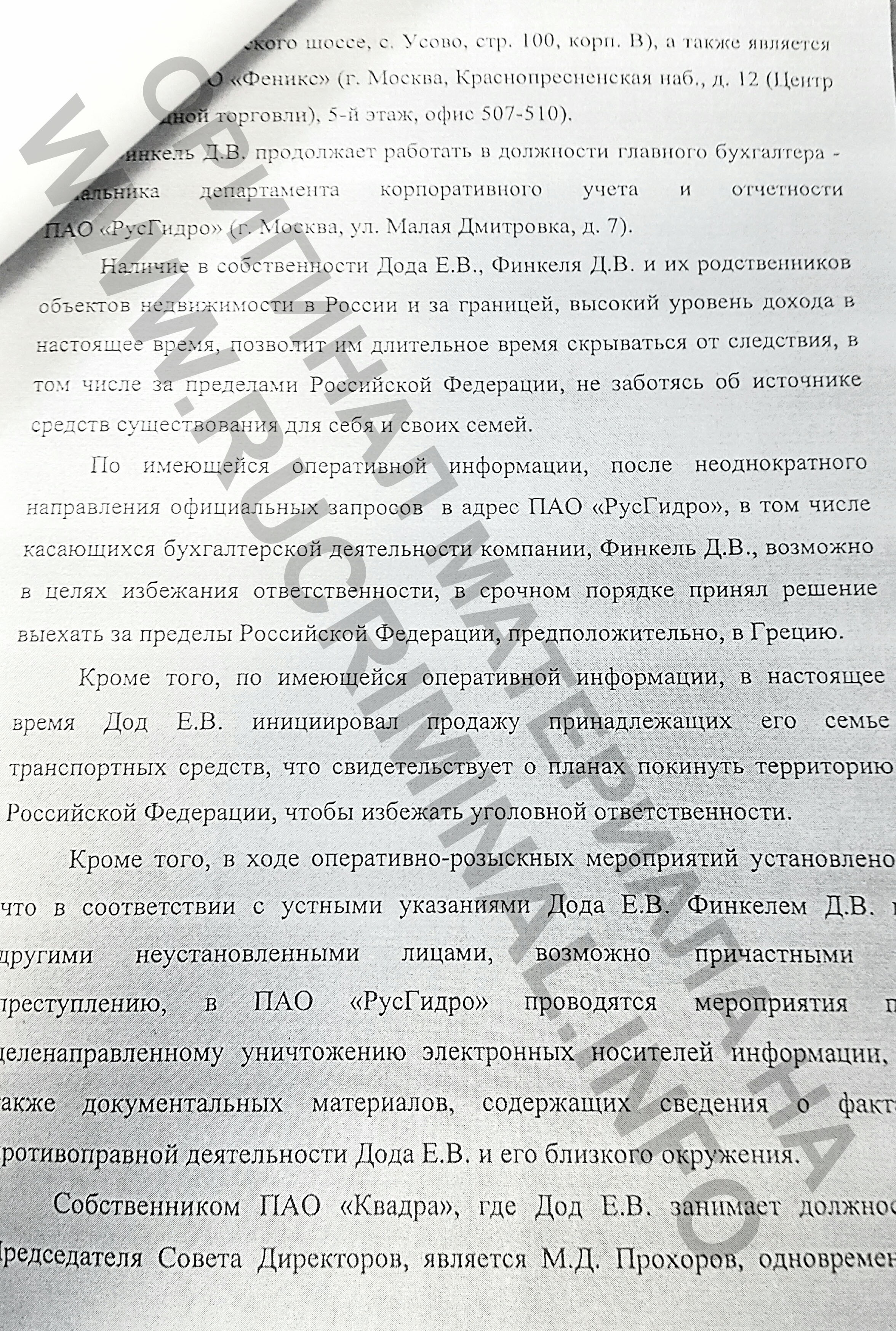 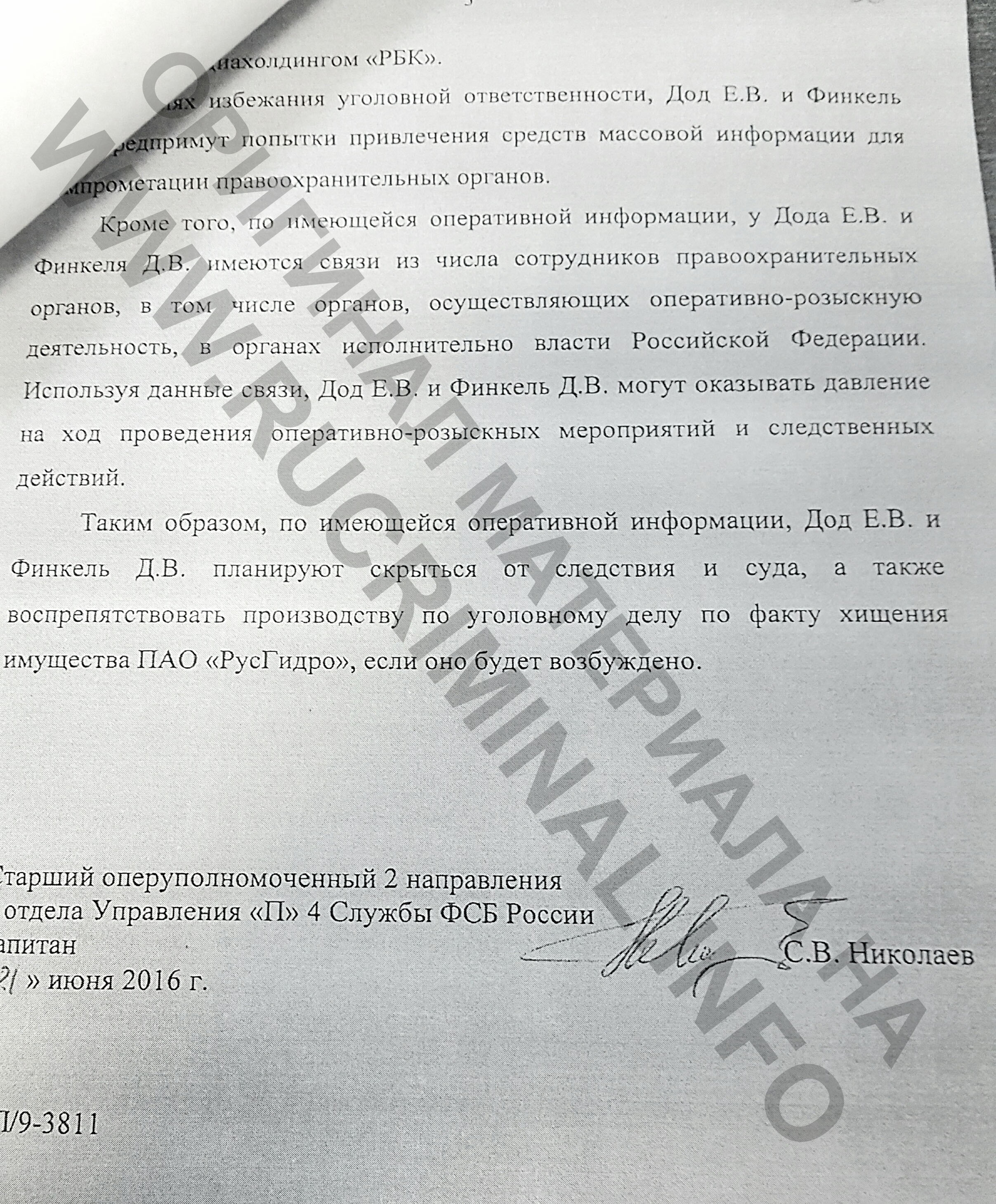