"Girl of an age" from Sergei Lisowski 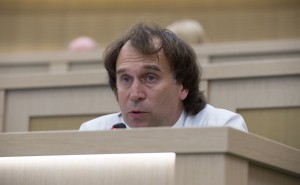 March 1, 2019 marks the 24th anniversary of the death of TV presenter Vladislav Listyev. Officially, one of the most notorious Russian crimes is listed as unsolved. But it's only official. In reality, the murder was solved by operatives and investigators of the Prosecutor General's office soon after its Commission. All the "strings" of the incident led to the current Senator Sergei Lisovsky. He had a serious financial motive: Leaves wanted to ban advertising on ORT and under this pretext to remove from the "television feeder" company Lisowski. Lisovsky personally knew the alleged organizer of the murder – Igor Dashdamirov. Lisowski discussed with a number of persons the possibility to radically solve the problem with Listyev. Before the crime, he visited the former curator of TV presenter Boris Berezovsky. Why he not in jail? He knows too much. Lisowski participated in the election campaign of Boris Yeltsin and the Kremlin believed that his arrest would hit the President. And Berezovsky Lisowski supplied underage girls to pleasures. Here is one of such conversations between them, which was stored in the archive of wiretaps Berezovsky, and is now at rucriminal.info ahhh! Note how Berezovsky explains several times to Lisovsky that girls need a certain age. Berezovsky preferred to spend the night with concubines up to 15-16 years, telling friends that those older "skin is not the same" and the feeling with them "not the same."

B: There's a girl over there... well, not one girl over there, that's the thing, the model, Yes... With her, do you think it would be interesting to someone, about the life of Russian models abroad? I mean article.

L: Well, if necessary, will do.

B: (interrupts) I mean, you, no special requests, I just think it might be interesting.

Lennon: In half an hour she'll call.

B: He's a very normal person, I'll tell you.

L: Yes, I liked it very much by the way.

B: it is Very normal.

L: it Seems to be nothing.

B: Can we think of something?

L: Well, let me call you in half an hour then?

B: Well, call me in half an hour, come up with something so cool, huh.

B: We can go somewhere, even to my place.

B: Think About It, Serge.