The case of Vneshprombank to the family of Georgy Boos 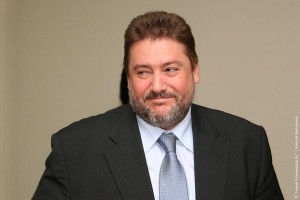 Tverskoy district court of Moscow decided to arrest the former first Vice-President of Vneshprombank Ali ajin. Previously, he was a witness in the case of theft of more than 113 billion rubles from this credit institution. In particular, thanks to the testimony of Ali ajin, ex-President of Vneshprombank Larisa Marcus received eight and a half years in prison. Sources Rucriminal.info I do not exclude that following the defendant will be a former Chairman of the Board of Vneshprombank Lirin Elena. This is the former wife and current business partner of the ex-Governor of the Kaliningrad region George Boos.

The criminal case itself, the defendant of which was the banker, was initiated at the end of 2018 under part 4 of article 159 (fraud on a large scale) and part 4 of article 160 (embezzlement) of the criminal code at the request of the deceived VIP-depositors of the credit institution, and have not received any compensation after the conviction of the former President and Vice-President of Vneshprombank Larisa Marcus and Ekaterina Glushakova. Dozens of clients of the Bank for tens of billions of rubles suffered from the embezzlement of funds, as state structures (the largest subordinated structure of the Russian foreign Ministry — GlavUpDK , the Olympic Committee of Russia, FSUE gnivts of the Federal tax service, Zarubezhneft, Rosneft) and the Church (Moscow Patriarchate), and private VIPs - the wife of the Minister of defence Sergei Shoigu Irina, the wife of Deputy Prime Minister Dmitry Kozak, Natalia Kvacheva-in-law and the head of "Transneft" Nikolay Tokarev, Andrey Bolotov, family members of the head of the Russian Olympic Committee (ROC) Alexander Zhukov , the relatives of the former Russian Ambassador to Ukraine Mikhail Zurabov and a member of the Board of Directors "Transneft" Artur Chilingarov.  Accusations of embezzlement brought against the Bank President Larisa Markus (sentenced to 9 years) and her brother George Begimova (is wanted by Interpol). However, the materials of the investigation said that the theft they committed together with "unidentified persons". One such person was Ali Ajina, who previously had the status of a witness. Sources Rucriminal.info they say that now the operatives are actively interested in the former Chairman of the Board of the Bank Elena Lyrina. Despite the fact that she is the ex-wife of George Boos, they have a partnership in business. In particular, Elena Lirina is the owner of 11.04% of shares of JSC NSP "svetoservice"- the main structure of the holding company Boos "BL Group". The joint daughter of Lyrina and Boos Catherine is the "right hand" of his father. She holds the position of first Deputy General Director of management company "BL GROUP" and is a member of the Board of Directors of the company. It is known that Lirin on a post of the Chairman of the Board of the Bank used funds of Russia on the development of joint business with Georgy Boos. Moreover, according to Rucriminal.info, "BL GROUP" and Vneshprombank used the same shell companies for transactions with funds. In the case of Vneshprombank we are talking about embezzlement of customer funds, in the case of "BL Group" about "work" with state funds received by this company on numerous state contracts.

Note that Larisa Marcus and Ekaterina Glushakova convicted of embezzlement from Vneshprombank more than 113.5 billion rubles, while the Central Bank found a hole in it in the amount of 140-145 billion rubles . During the first investigation, launched in December 2015, the interior Ministry found that the Bank could be withdrawn almost 200 billion rubles.