"The case was taken away from the Volodin family"

The prosecutor's office defends the interests of the speaker of the State Duma of the Russian... 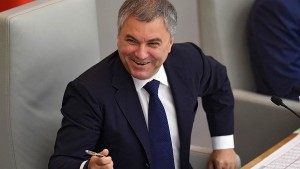 At the disposal of Rucriminal.info were documents that indicate that the ICR was investigating a criminal case on non-payment of taxes on an especially large scale by firms associated with ZAO Trolza. And all the threads of this case led to the leaders and owners of Trolz. As a result, the prosecutor's office of the Saratov region not only did not allow these threads to be carried out, but also did not allow materials concerning the general director of Trolz to be sent to the court. What are the reasons? One of the beneficiaries of Trolz is Lydia Petrovna Barabanova, the mother of State Duma Speaker Vyacheslav Volodin.

Since June 30, 2009 the owners of the plant's shares are LLC Pleshcheevo and JSC / LLC Gortrans (the company has repeatedly changed its organizational and legal form) - they each have 50 percent of the shares of Trolza. In the structure of the owners of the company "Gortrans" it is possible to trace in different years the Saratov structures, in addition to CJSC "Trolza" these are LLC "Pleshcheevo" and NVK BANK, as well as Moscow JSC "Garda" and LLC "Invest-holding", the only beneficiary of which is Lidia Petrovna Barabanova is the mother of Viacheslav Volodin.

As a source told Rucriminal.info, in the proceedings of the Investigative Department for Engels of the Investigative Directorate of the Investigative Committee of Russia in the Saratov region there was a criminal case No. 12002630019000010 against S.A. Klyucharev. on charges of committing a crime under Part 2 of Art. 199.2 of the Criminal Code of the Russian Federation. In this case Klyucharev S.A. imputed concealment of funds of CJSC "Trolza" due to which the collection of tax arrears was to be carried out on an especially large scale (just over 27 million rubles).

The corresponding criminal case was completed by the investigation and transferred to the prosecutor of the city of Engels, Saratov Region for approval of the indictment and sending it to court.

According to the documents that are at the disposal of Rucriminal.info, the acting. the prosecutor of Engels, A.A. Lukogorskiy 04/09/2021 at the direction of the first deputy prosecutor of the Saratov region Mineev I.V. a resolution was issued to return this criminal case to the investigator for additional investigation.

It is illegal to return a criminal case to an investigator. In fact, by orders of the prosecutor, the transfer of funds in the amount of 26,419,663 rubles at the instructions of S.A. Klyucharev counterparties of ZAO Trolza to the company's suppliers bypassing the accounts of ZAO Trolza (for which operations were suspended by the decisions of the tax authority) were recognized as an action in a state of extreme necessity.

The prosecutor actually ignored the established judicial practice in this category of criminal cases and did not take into account that the actions of S.A. Klyucharev were not aimed at eliminating the danger threatening the interests of society and the state, that is, at preventing environmental or man-made disasters, social explosion or loss of life, but were aimed at observing the commercial interests of ZAO Trolza.

These actions of the prosecutor's office were dictated by the personal patronage of the first deputy prosecutor of the region I.V. Mineev to the management and owners of Trolza CJSC.

According to a source Rucriminal.info, currently criminal proceedings was suspended (from 06/11/2021) due to the lack of the possibility of ensuring the participation of the accused in the criminal case. Investigators were actually forced to make this decision, since in the opposite situation, taking into account the decisions of the prosecutor's office, it was necessary to make a decision to terminate the criminal case and recognize the right to rehabilitation.

This decision (actually illegal, since there is a real possibility of the accused's participation in the criminal case) has not been studied by the prosecutor's office since 06/11/2021, since they are satisfied with the current situation.

At the same time, at present, the debt of Trolza CJSC only for the payment of taxes and fees exceeds 23,000,000 rubles, however, the territorial bodies of the Federal Tax Service of Russia are under pressure from officials of the prosecutor's office, in particular I.V. Mineev, were forced to abandon the requirement to declare ZAO Trolza bankrupt (ruling of the Arbitration Court of the Saratov Region dated June 21, 2021 No. A57-1599 / 2020).