"The fact Mazurova" is selected to the team of Sergey Sobyanin 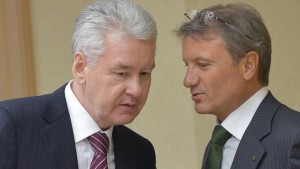 By information Rucriminal.info, a criminal case against the founder of the "New stream" and Antipinsky oil refinery Dmitry Mazurov can cause an irreparable blow to the mayor of Moscow Sergei Sobyanin, who, according to our sources, has presidential ambitions. If earlier it was assumed that the "landing" Mazurov another project to squeeze the property of the head of Sberbank German Gref. Now the situation turns in the direction that the beneficiary of the "closure" Mazurov was a close friend and business partner Sobyanin Vladimir Kalashnikov.

Sources believe Rucriminal.info, in the near future in the "Mazurov case" may appear testimony and materials in respect of Vladimir Kalashnikov, who for 13 years was an unofficial co-owner of Antipinsky oil refinery. On market believed, that Kalashnikov represents in this project not only themselves, but and his friend Sergei Sobyanin. According to the version of our interlocutors, throughout this time (13 years) Kalashnikov received hundreds of millions of rubles in cash – this was the share of him and the one behind him in Antipinsky oil refinery. Then, this share has increased significantly. Due to the fact that Kalashnikov attracted to the project a classmate of the head of state lawyer Nikolai Egorov. It was announced that Egorov is an additional and extremely reliable degree of protection of the refinery and the "New stream".

The history of loans from Sberbank (and the refinery received them for $3.2 billion) is a separate story. According to the interlocutors Rucriminal.info, the issuance of the last of them was decided more at the level of Kalashnikov-Sobyanin-Gref. And their spending, to put it mildly, to a lesser extent depended on Mazurov, so a significant part of the money was in offshore accounts that are not related to Mazurov.

All these details of joint business Mazurova, Kalashnikov and his patron, Egorova, not really disturb, as long as between partners the conflict began. There are several reasons. According to the source Rucriminal.info first, it turned out that from the huge share received by Kalashnikov for himself, his patron and Egorov to the last, as it turned out, came very, very little. Secondly, there was an unresolved issue with Sberbank loans, some of which settled offshore. I had to find the last one. Thirdly, plans for the possible sale of the refinery began to wander. And, their customers and led negotiations with them and Mazur, and Egorov, and Kalashnikov. Well, as usual, the topic was added, who sent more to personal foreign accounts from the activities of the refinery.

The biggest conflict recently was between Mazurov and Kalashnikov. As a result, the first was behind bars. Moreover, according to sources Rucriminal.info. events developed as follows. Sberbank has repeatedly tried to start an investigation about the theft of loans, but not very successfully. Just a couple of days before the detention of Mazurov, the Investigative Department of the interior Ministry issued another refusal decree. Herman Gref was extremely dissatisfied, and turned their displeasure into the side of the head of the interior Ministry of Russia Vladimir Kolokoltseva. But, as the interlocutors say, this was not the decisive factor. And the proximity of Kolokoltsev to Sobyanin, which is beautiful became visible during the hard dispersal in Moscow protests. The result of the Investigative Department of the MIA of the Russian Federation has sharply changed the decision, filed a case and immediately arrested Mazurova.

However, according to Rucriminal.info, it is still unclear how this case will turn, given that in fact an alternative investigation began to conduct and the Investigative Committee of Russia. According to the interviewees, after all, not all amounts left in cash Kalashnikov. Were and receipts to specified accounts that can be documented to prove in the course of the investigation.

As told RBC, Sobyanin drew attention to the construction of Antipinsky oil refinery as Governor of the Tyumen region. He helped in solving problems with land registration, with connection to the main oil pipeline, etc.. Then the mayor went to Moscow to supervise the administration of the President. But unattended plant is not left: the number of partners Mazurova found a boyfriend Sobyanin, Vladimir Kalashnikov. How was this partnership Rucriminal.info will tell soon.