Elbrus Komaev remembered in connection with the explosion in Moscow 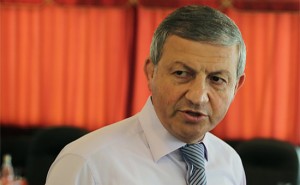 The telegram channel of the VChK-OGPU published the next batch of materials about the activities of the gang of killers Aslan Gagiev (Dzhako). In particular, a photo of the cottage on Novorizhskoye Highway, in which Gagiev himself periodically lived, was cited. In the same place, sometimes there were murders of some guilty members of the group or of the Family, as Jaco called her. It turned out that this cottage is very difficult. Its owner was Komaev Elbrus Khodashkhoevich. This is a dollar millionaire, the owner of the Salyut distillery. Komaev was a business partner of Gagiev and provided his cottage Dzhako for housing. Now Komaev is also a very significant business partner - this is the head of North Ossetia, Vyacheslav Bitarov. The correspondent of Rucriminal.info became aware of the details of the relationship between Komaev and Gagiev. According to our sources, Gagiev and Komaev were not just partners, but also close friends. Moreover, everyone on the market knew that from 2007-2008, Dzhako was a non-tacit co-owner of Salute and received its share. When Gagiev was “on the throne,” “terrible and powerful,” he singled out Komaev among the many partners. “Gagiev treated him especially, without his cold calculation. “As a relative,” said the source of Rucriminal.info, “Komaev also did not remain in debt.” When Gagiev went on a run to Austria, many of his partners stopped paying dues. Komaev, on the other hand, transferred Dzhako his share until his extradition from Vienna to Moscow. Maybe he continues to do this now, but with accuracy this fact was not recorded by the investigators.

Komaev and Gagiev have known each other for a long time. And they became “blood brothers” after the next story. Until 2007, Komaev was not at all the owner of Salute, but was just a hired manager. The plant was owned by Oleg Gioyev Mairamovich, a man who possessed a mass of connections. Komaev was the commercial director of Salyut. And by 2007 it became clear that a successful plant had large debts. Komaev was justified by the fact that distributors paid poorly. But Gioev did not believe it and appointed an audit of the affairs in Salute. And she showed that gigantic funds were simply stolen. A sword of Damocles hung over Komaev. And here, on April 18, 2007, Gioev was blown up in Moscow. After his death, Komaev simply pushed Gioev’s relatives out of the factory, bankrupted the company, and bought it himself with a loan. After that, Aslan Gagiev (Dzhako) began to receive a share. And Rucriminal.info is not at all surprised that in the course of the investigation of the “Djako case” the investigators found that Gioev was blown up by the Gagiev’s group. Moreover, in the investigation materials, you can find a photo and a description of a beautiful cottage in the village of Baltika on Novorizhskoye Shosse in the Moscow Region. Gagiev lived in this cottage from time to time, and killers from his organized criminal group also stopped. And several of them, suspected of treason, were killed in the cottage: in the basement and by the pool. Then the bodies were dismembered and scattered around Moscow. It turned out that the owner of the cottage is a friend of Gagiev Elbrus Komaev. According to sources of Rucriminal.info, many threads from Dzhako and stories with the undermining of Gioev are drawn to Komaev. However, for some reason, with respect to him, the investigation hardly moves. There is generally an interesting story. There are more than 40 murders on the account of the Jaco gang, and not one “customer” for these crimes has not been established. There are two reasons for this. The first is due to the fact that Gagiev did not begin to testify. Everything, for sure, will change when he gets a lifetime. In the meantime, partners promise Jaco a milder sentence. After a lifetime, these same partners will stop paying Gagiev’s share of their business. The second reason is that Gagiev’s partners have a very powerful cover. For example, the same Komaev is a business partner and friend of the head of North Ossetia, Vyacheslav Bitarov.