"Why are you all so soggy?"

He was an authority in the criminal world, also had connections in law enforcement agencies “You have not yet realized that they have nothing at all, except for your words, that you are planting everything yourself. It is not important what was - it is important what can be proved. You plant yourself, then you wonder why you are ... Eh, that you are all so soggy ... “They still have to prove it. It's just that the younger you speak, the more difficult it will be to prove it all .. Try to speak less, and everything will work out ... Well, we don't really need a jury trial. Well, I think so. Because, as it were, if there are judges, well, let them prove ... What if you hadn't started telling all this, nothing would have happened at all ... The fact is that because of you, everyone else was shut down. If you just kept quiet, you would sit for a year, damn it. We would all be at home with our children already! ”- these are the phrases that the" authority "Konstantin Piskarev (Kostya Bolshoi) uttered after a confrontation with a member of the organized crime group Mishin. There are dozens of murders on account of Kostya's group, and some of the bandits began to cooperate with the investigation. Mishin's testimony is published today by Rucriminal.info. “Testimony of Mishin D.S. as an accused, according to which, after serving in the army, he began to work for his father in the Stroyrost firm, then began to work in the Bauman market and maintain relations with members of the Bauman criminal group. At one of the meetings, Mishin met Piskarev, who impressed him as a person with great opportunities and material resources. Mishin decided that by working with Piskarev, he could achieve great success.

From about August 2001, Mishin began working for Piskarev: he performed the duties of a driver, filmed Piskarev's meetings with a video camera, took pictures of various places, cars, people. The obtained photographs (films, or photographic equipment) Mishin gave to Piskarev. Also, Mishin, on behalf of Piskarev, carried out surveillance of people. Piskarev gave Mishin a verbal description of the persons or vehicles that had to be followed. Piskarev paid about $ 200 a month for his work. When joining Mishin's gang, it already included Saryan, Stolyarov, Fedoseev, Zemtsov, Zamyatin, Lupichev, Alexandrov, Sergei Bezrukov. While in the gang, Mishin brought Makarov, who in turn brought Sergei Yuryevich and Shchesnyak to the gang of Bezrukov. The base and gathering place for the gang members was the Burevestnik yacht club. The activities of the criminal group were quite well organized, Piskarev was the leader, everything was directly under his control, his authority was indisputable, everyone strictly followed his instructions. The group had firearms, for which, according to Mishin's assumption, Saryan was responsible, who was generally responsible for the material support of the gang, issued to crimes and clothing, technical "wages". Saryan was responsible for providing the necessary items for the preparation of communications, means for suppressing cellular communications, cars, weapons, ammunition. Saryan also carried out surveillance and technical training. Lupichev, nicknamed the Dragon, was a performer, he did not solve any difficult issues. Aleksandrov, nicknamed Nixon, was also a simple performer, in addition, he was associated with weapons.

In the gang, Mishin met a wanted man named Andrei, who had the nickname Gloomy (according to the investigation, Stolyarov), who had a fake passport and a driver's license made with the help of Piskarev. Stolyarov, according to Mishin, was a cunning, two-faced intriguer who loved to do everything with someone else's hands, could set someone against each other. Piskarev did not like Stolyarov, he did not entrust him with serious work and gave him over to Zemtsov. Stolyarov brought Aleksandrov to the group. Stolyarov was assigned to spy on people, everything naturally happened at the command of Piskarev. Stolyarov also attended the meetings where Piskarev took him. In addition, Stolyarov carried out minor assignments for Piskarev related to transportation and meetings. At the direction of Piskarev, after Zemtsov's apest, Stolyarov collected money from controlled merchants and continued to carry out the work he had been doing under Zemtsov.

After Fedoseev's death, his place was taken by S.A. Bezrukov. nicknamed the Commissioner. S.A. Bezrukov was engaged in the sale of confiscated equipment and property according to court decisions.

Piskarev was an authoritative person in the criminal world, and also had connections in law enforcement and other state structures. Mishin regularly used Piskarev's connections when running his personal non-criminal business. Later, when Mishin became an accomplice in several murders, he became afraid that Piskarev would not let him go and deal with him.

At first, Piskarev led the gang with the help of Zamyatin: he discussed with him all his actions and his decisions. Zamyatin was a native of the Orekhovskaya group, in Piskarev's group he was, as it were, in the shadows, but Piskarev listened to his opinion. Zamyatin knew about everything that was happening in the group. Zamyatin helped Piskarev “grow ”, It was he who introduced Piskarev to the crime bosses. Zamyatin served in Afghanistan, was a member of various criminal groups.

Mishin often saw Zamyatin at the base, where the latter communicated very well with Piskarev, so to speak “heart to heart,” that is, he was friends with Piskarev. Later, when Piskarev gained authority for himself, Zamyatin stopped frequently visiting the Burevestnik yacht club, since Piskarev was able to resolve issues without Zamyatin's direct participation.

It was not customary in the gang to spend their free time together, to share information. Often Mishin did not know about the crimes committed by others,

Piskarev was not in the habit of explaining the purposes of joint trips, did not report the reasons for the murder of different people, only explained to each participant in the crime what exactly he should do.

Before committing murders, Piskarev dressed in low-key, dark clothes, put on gloves. Piskarev's outerwear could be with a hood, since sometimes, when committing murders, he put a hood on his head and pulled it tight, so that only his eyes were visible. Piskarev prepared for the murder from the back seat of a car, while he could use makeup, for which he had a suitcase with make-up accessories. Piskarev could use an artificial beard, mustache and the like. In addition, Piskarev had a bag with instruments that he used for torture. " 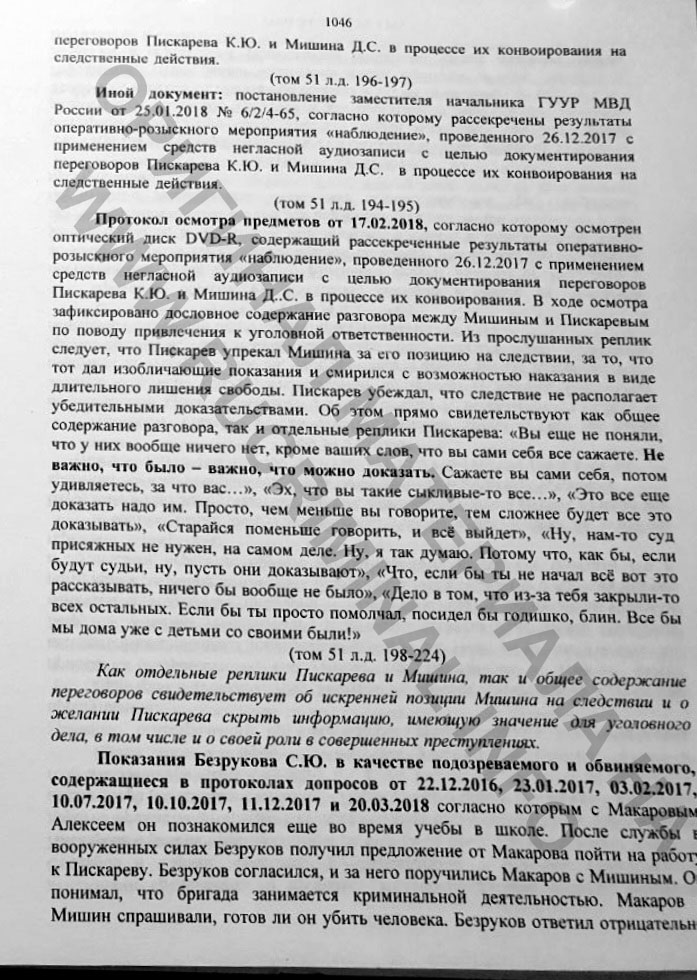