Former head of OCD cleared the past 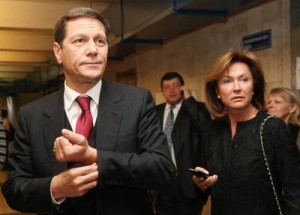 Former owner of Vneshprombank (VPB) Georgy Bedzhamov, who withdrew more than 210 billion rubles from a credit institution, continues to hide assets. There are many hunters on them. In addition to A1 (representing the interests of the bankruptcy trustee of Vneshprombank - the Deposit Insurance Agency), the assets of Bedzhamov and his wife Alina Zolotova, especially American ones, are trying to get the family of ex-head of OCD Alexander Zhukov.

According to Rucriminal.info sources, Georgy Bedzhamov in his calculations in London uses only cash, because the court imposed restrictions on the amount of expenses. Bedzhamov has a lot of cash hidden. The ex-owner of Vneshprombank is actively selling residential real estate, which he bought at one time in England and other countries and which A1 has not yet found. Just the other day, Bedzhamov received an advance of £ 2 million for a building in the Belgravia area, with an area of ​​2500 square meters. Earlier, Bedzhamov told everyone that this building had not belonged to him for a long time. The total transaction amount is 8 million pounds, and the vance amounted to 2 million pounds. According to Rucriminal.info, Bedzhamov in London spends huge amounts of cash daily. All day long she walks with various escort models to the most expensive boutiques, scattering stacks of money left and right. At the same time, the Bejamov told the English court that he was barely enough for the spending allowed to make ends meet.

The family of the former head of the ROC, Alexander Zhukov, looks at it and literally sheds tears. When Alexander Zhukov came to the leadership of the Olympic Committee in 2010, money flowed not only to the OKR, but also to social funds that Zhukov supervised as Deputy Prime Minister, in the WBP. Then George Bedzhamov headed the Bobsleigh and Skeleton Federation. The son of the former head of the ROC, Peter was a member of the board of directors of Vneshprombank, his wife Ekaterina, together with their family, Georgy Bedzhamov and his wife Alina Zolotova, bought a five-star premium hotel Badrutt’s Palace Hotel in Swiss St. Moritz. Badrutt’s Palace Hotel is only a small part of the joint assets of Bedzhamov and Zhukovs. Part of the assets of the Bejamov-Zhukov families was registered for offshore companies Basel Properties Limited and Lucksoft Management Limited, the beneficial owner of which is now Bedzhamov’s wife Alina Zolotova. Prior to fleeing from Russia, Bedzhamov was the ultimate beneficial owner of Basel Properties. Leaving Russia, Bedzhamov cut off access to joint assets to the family of the ex-head of the ROC. They did not want to put up with this. But, according to Rucriminal.info sources, the Zhukovs are not going to give up. On the one hand, they in the USA actively support the investigation of the local Ministry of Finance on the investment of funds by Bedzhamov in this country. On the other hand, the Zhukovs in every possible way remove at least some traces of their close ties with the Bejamov-Zolotova family. For example, a joint photo of Ekaterina Zhukova, Alexander Zhukov and Alina Zolotova disappeared from the website of the International Bobsleigh and Skeleton Federation (IBSF). And there was a party at their then still joint hotel Badrutt's Palace in St. Moritz. There was only a caption for the photo.