Ruben Grigoryan: from the sausage to the philosophers and masters of Moscow 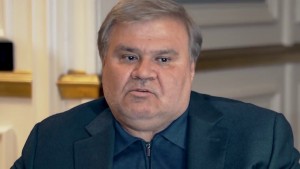 Businessman Ruben Grigoryan published the book “I Take My Step Today”. In the advertising campaign for her, he calls himself "a wise man and deeply understanding life." Grigoryan does not regret his own praise: “a successful business man and philanthropist, writer and publicist, public figure.” Rucriminal.info conducted its own investigation and in several publications will try to figure out how much Grigoryan’s biography corresponds to that of his proxies. Ruben Tsolakovich Grigoryan was born in Yerevan, where he graduated from the Polytechnic Institute with a degree in radio engineering. Further, the “steps” of his official biography look very beautiful: engineer in a radio and television broadcasting center, Armenian SSR, Yerevan; Director at RTA "Lazur", Armenian SSR, Yerevan; Deputy General Director in MPR Electron, Moscow.

And since 1990, according to personal biographers, he becomes the founder and president of the Rutsog-Invest construction and investment holding. In reality, Grigoryan’s path to Moscow, and even in the capital itself, was more thorny.

After graduation, he began working in the branch for the repair of radio - television equipment in Zangezur (a historical region in the southeast of Armenia). Ruben, along with colleagues, traveled to small villages and for the money repaired people TVs, radios, etc. As Grigoryan himself admits in an interview, if people didn’t have money, then he could also take payment by barter, agricultural products. Whether Ruben himself absorbed them or then sold them on the market, history is silent. Actually, this was his long-term business, until Grigoryan went to the capital. He himself claims that this was his personal decision - to “conquer” Moscow. In reality, everything was different. Grigoryan's more well-established acquaintances, who had long lived in the capital, needed a foreman at one of the construction sites. Then they remembered Ruben. Having worked at a construction site, Grigoryan took up his favorite business - repairing equipment. Perhaps he would continue to engage in this craft now, if more successful fellow countrymen didn’t add it to an advantageous position - with the beginning of cooperation, Ruben was helped to open a stall selling sausages on Prospekt Mira. However, things were not going very well for Grigoryan.

As often happens, Grigoryan blamed his countrymen for his failures, helping him with a simple business, and as a result decided to create his own commercial project. Only it was called not “Rutzog” (which stands for Ruben Tsolakovich Grigoryan), but the more modest commercial company “Fakel”, where our hero took the chair. This time Ruben chose as partners, as it seemed to him, generous people - representatives of one of the capital's organized crime groups. It all ended very sadly. Rucriminal.info turned to the official police codes of those times. So, on June 8, 1993, at 11.55, the service “02” received a call from citizens that they were hearing crying and screaming for help from the garage 51 on Urzhumskaya Street. Arriving at the scene by the police, the premises were opened, and inside was "Grigoryan R.Ts." chained to a wall with a gunshot wound to his left leg. As it turned out, the new partners decided to teach Ruben a lesson, grabbed him on the street, brought him to the garage, where they mocked him for several hours. Grigoryan was afraid to name the names of the offenders and the reasons for the bullying, saying that some unknown intruders had taken the keys from his apartment from him. However, in the house where Ruben lived, the presence of thieves could not be detected. Did not help to catch the mythical robbers and arranged behind the garden.

After what happened, Grigoryan hastily returned to his fellow countrymen and for some time engaged in the old business. In addition to other natives of Armenia, father-in-law Viktor Mazurov actively helped him in this. And in 1999 (and not at all in the 1990th), the Rutsog-invest company was born.

Just at the end of the 90s, a construction boom began in Moscow and a number of wealthy and influential businessmen were looking for a person who could do all the organizational work for the construction of residential buildings and shopping centers (the same foreman, but with great authority). It is clear that all the main work is to resolve issues with Moscow and federal officials, to seek funding sources, they took upon themselves. At that time, Ruben simply had no necessary connections and de-neg. So actually Grigoryan found himself in the construction market. However, he was never an independent player; behind him there were always more influential figures. For example, a co-owner of Rutzog Invest (through a chain of offshore companies, including ALIQUIPPA limited) is a person with extremely extensive connections - Valery Gusev, Vice President of the Association of Russian Businessmen in Cyprus. And the co-owner of another structure associated with Grigoryan - “2N Kompani” - is the family of President of the Union of Armenians of Russia Ara Abrahamyan.

Of course, while working on the capital’s construction market, Grigoryan also had his own certain connections, but nevertheless he preferred to solve problems with the money he had. Hence, some of the projects of "Rutsoga", which clearly could not do without a corruption component.

When Sergey Sobyanin became mayor of Moscow, he and his team members began to rake the Luzhkov legacy. And we stumbled upon an interesting investment contract signed in 2000 by the Moscow government and Vesta CJSC (part of Grigoryan's investment and construction holding Rutsog-Invest). According to him, the reconstruction of the multifunctional center "Sheremetyevsky" (now the business center "Nikolskaya Plaza") and the reconstruction of the multifunction complex on the corner of Nikolskaya, 12/1 and Maly Cherkassky lane, 1/13 (now the hotel "Nikolskaya"). Under the same contract, the investor was to build an underground parking lot under the Lubyanka area for 350 cars (16 thousand sq. M). But on the third object, the work was not that it was not finished, it did not even begin. What is not surprising, the parking lot there simply could not appear, since three metro lines intersect under Lubyanka Square and there are objects of the FSB and the Presidential Administration. That is, the metropolitan authorities (from the time of Luzhkov) gave Grigoryan the approval to build in the historical center, a 5-minute walk from the Kremlin on a plausible pretext - Ruben’s structures would seriously help the city by erecting a huge parking lot (5% of all parking spaces inside the Garden Ring). And Grigoryan’s structures agreed with this condition. At the same time, both parties in advance knew that it was simply impossible to build this parking lot. Grigoryan’s work was conducted as an “elephant in a china shop”. According to the materials of the Archnadzor, which is at the disposal of Rucriminal.info, as a result of the construction of the Nikolskaya Plaza and the Nikolskaya Hotel, almost all the architectural monuments of the Sheremetev’s Compound were irretrievably destroyed.

But this was not enough for Grigoryan. In 2013, UBEPiPK GUVD Mosk-vy conducted an audit of the unauthorized seizure of Nikolskaya Plaza by a municipal land of 1.5 thousand square meters. m

There have been dozens of various appeals to law enforcement agencies in connection with the activities of Ruben’s structures in recent years. But the financial factor and pre-investigation checks affected, and did not turn into criminal cases.