How Alexey Navalny was poisoned is impossible to establish Representatives of the Berlin clinic Charité announced that Alexei Navalny had been poisoned with a substance from a group of active substances called cholinesterase inhibitors. This is the basis for both the medicine taken for Alzheimer's disease, and for more than 500 potent toxic substances, for example, the same "Novice" who poisoned the Skripals in England. A poisonous substance based on a cholinesterase inhibitor was used to murder the head of Rosbusinessbank Ivan Kivelidi and his secretary Zara Ismailova. Rucriminal.info has materials of this high-profile case at its disposal, and they describe in detail how the substance works. It does not have to be taken internally through food. It is enough just to touch the object treated with the substance to receive a lethal dose. Therefore, it is impossible to establish how Navalny received the “dose”. He could take a pen, glass, bag, umbrella, etc., treated with the substance, and get poisoned.

How can you get poisoning with identified substances, including fatal (inhaling them through the nasopharynx, taking them inside dissolved in a liquid)

SUPPLIED BY THE EXPERT:

The objects for research were provided to the expert earlier in accordance with the resolution of the senior investigator of the Moscow prosecutor's office V.A.Vorykhanov.

An earlier examination of material evidence (see conclusion 52 of November 4, 1995) found that there are traces of a nitrogen-containing organophosphorus substance on the telephone receiver and the apparatus, which probably has the following structural formula:

To confirm this formula and a categorical answer to the questions posed to the expert, a counter synthesis of the substance of the proposed structure is required, which cannot be carried out in the EKTs of the Ministry of Internal Affairs of the Russian Federation due to the lack of necessary conditions.

It was not possible to find any data on this substance (physical and chemical properties, toxic properties, etc.) in the scientific literature. However, based on the fact that fluoroanhydrides of phosphonic acid esters and a number of other compounds with a similar structure are widely used as chemical warfare agents of nerve action, it can be assumed that this compound will have a lethal effect on the human body by blocking cholinesterase both by absorption through the skin and by inhalation (inhalation of vapors) and by oral administration.

L This compound is likely to be lethal to humans. "

“At the same time, the injury with a poisonous substance most likely occurred as a result of its polylapplication into the body mainly through the skin of the hands: as a result of contact with the infected surface of the telephone set and, possibly, with other surfaces and office objects infected with the same poisonous substance and the mucous membrane of the eyes, where the substance could be brought from the surface of contaminated hands. The inhalation route of entry of the VX-type low-volatile substance is practically excluded. As a result of the studies carried out to exclude the possibility of injury to victims through the respiratory organs, it was established: under conditions of prolonged static inoculation of experimental animals, which were placed in an inhalation chamber for 2.5 hours together with an infected telephone receiver near the respiratory organs at a distance of about 5-6 cm (finding the handset during a telephone conversation). No signs of damage to experimental animals have been established. " 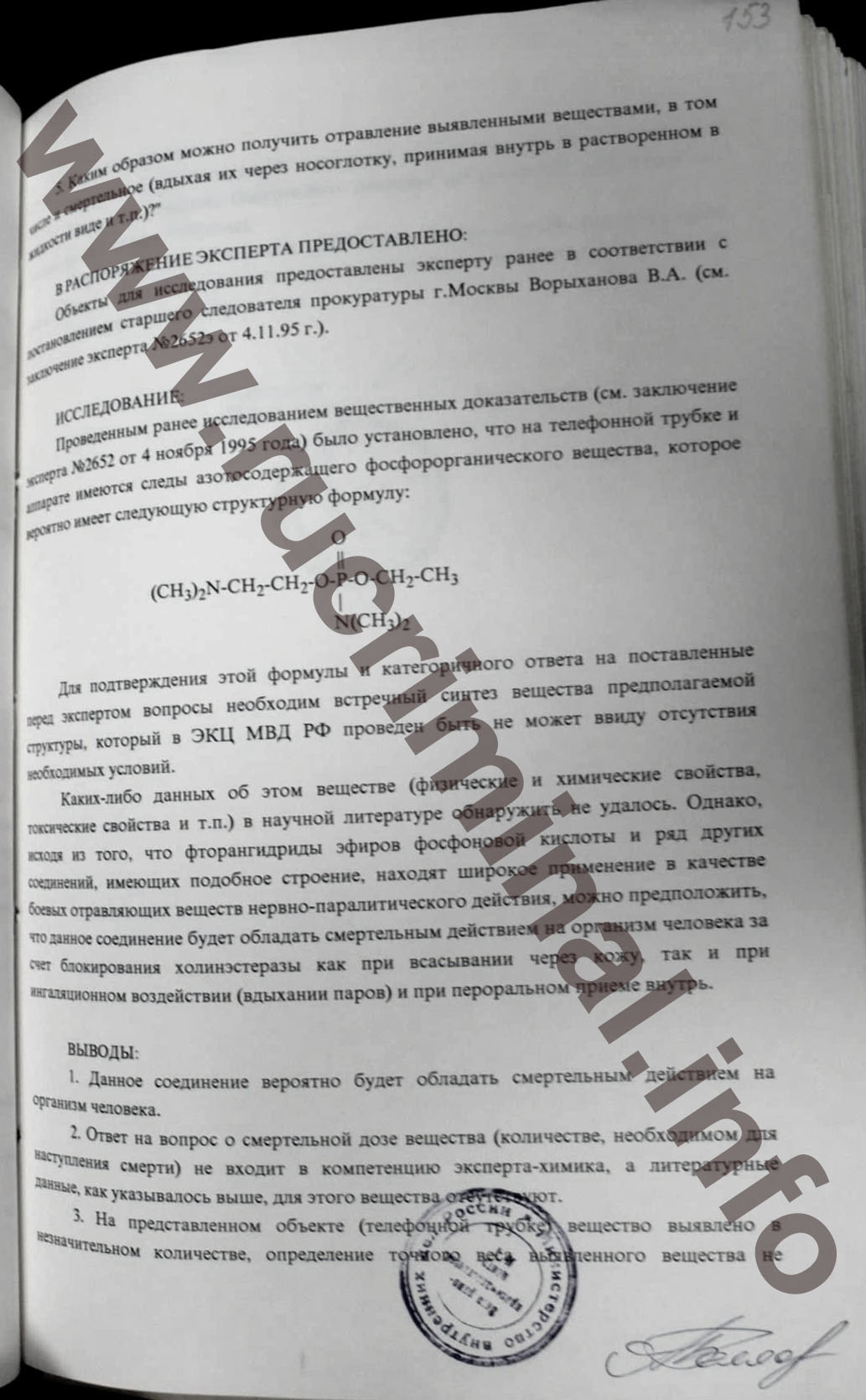