Thanks from Putin and the poison Gelsemium Elegans

The Deutsche Bank Case promises to be a thrilling thriller According to FinCEN documents, the US financial intelligence established that the organizers of the money laundering channel through Deutsche bank were the shadow bankers Alexey Kulikov, Oleg Belousov, Andrey Gorbatov. These persons are also involved in the investigation carried out by the Investigative Department of the Ministry of Internal Affairs of the Russian Federation - on the theft of funds from Promsberbank. Kulikov has already been convicted, Belousov is on the international wanted list. As part of this investigation, work is also underway on money laundering through Deutsche bank. According to the telegram channel VChK-OGPU, it has already been established that the main unofficial co-owner of Promsberbank, Ivan Myazin, was the main one in this campaign of the shadow bankers. He is also condemned. At the same time, when the verdict was passed, mitigating circumstances were taken into account, such as the fact that Myazin was awarded a commendation “from the President of the Russian Federation V.V. for his contribution to the strengthening of friendship between Ukraine and Russia, as well as the presence of his awards: a commemorative medal "10 years of signing the Treaty on the creation of the Union State." 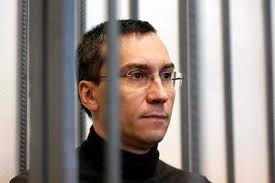 As FinCEN materials have shown, Kulikov, Belousov and Co. actively used the Financial Bridge company, which was previously associated with Alexander Perepelichny, for laundering activities. Until 2008, Perepelichny was involved in organizing money laundering schemes by Russian officials in Europe. After 2008, he moved to London and became one of the key informants in the Magnitsky case. Then this company, which has accounts with Deutsche bank and is involved in money laundering schemes through this bank, was bought by shadow bankers Ivan Myazin, Alexey Kulikov and Oleg Belousov. The work of Financial Bridge was directly supervised by Andrey Gorbatov. Alexander Perepelichny died in 2012 during a morning run near his home in a suburb of London, the businessman was then 44 years old. The police first reported a heart attack. However, two years after his death, the company in which Perepelichny insured his life initiated an investigation: as a result, a poisonous substance contained in a rare Chinese plant Gelsemium Elegans was found in the businessman's stomach. Symptoms of poisoning with this substance are similar to arrhythmia.

Rucriminal.info has at its disposal the testimony of a witness in the case of embezzlement of funds from Promsberbank, the accused of which are all the organizers of the laundering channel through Deutsche bank - Myazin, Kulikov, Belousov. The witness describes in detail all the mechanisms of this laundry. We publish the second part of the testimony. (see the first one here).

“For a long time, Myazin, Belousov, Kulikov and their partners have been preparing the ground for organizing their activities in the European Union and Great Britain, opening campaigns, accounts, buying luxury goods and real estate. The stolen money was freely legalized using fictitious documents, and structures for organizing criminal activity were created on them, here is one example. The money stolen from Promsberbank (PSB) was used by Myazin, Belousov, Kulikov and Gorbatov to purchase the Cypriot bank "CDB" in Nicosia. (Laramina Tradein LTD and Dayrona Tradein LTD). The documents provided in confirmation of the availability of funds (income) by these persons were falsified: Belousov provided documents on allegedly receiving income from the sale of a stake in PSB (he owned it through the Business Consult LLC campaign at that time). In reality, his share remained in the PSB bank, it was simply re-registered to two individuals close to him. All transactions were sham, but the regulatory authorities of Cyprus were satisfied with the submitted documents, and, as Belousov boasted, it cost him a modest amount by his standards of 20,000 euros. CDB Bank was actively promoted by Myazin, Belousov, Kulikov and their partner Andrey Gorbatov (securities specialist) in “mirror deals” with Deutsche Bank, through a bundle of CDB and Ray Man and Gor securities CJSC (RMG). The activities of the group of Myazin, Kulikov and Belousov to date have been suppressed in the territory of the Russian Federation. Belousov Oleg and Gorbatov Andrey and other members of their group, avoiding responsibility for the crimes committed, freely live on the territory of Cyprus, hiding from the law enforcement agencies of the Russian Federation., Continue to engage in criminal activities, feeling comfortable and free. They see the CDB as a structure (instrument) that is at their full disposal, management, completely subordinate to them, and capable, upon their instructions, to provide further services for the legalization of illegally obtained income.

In their criminal activities, the group of Myazin, Kulikov, Belousov and Gorbatov involved many financial instruments, campaigns both on the territory of Russia and outside the Russian Federation. With the light hand of Belousov and Gorbatov, Financial Bridge and Westminster Management and other investment campaigns were involved. Financial Bridge actively participated in transactions for the formation of packages of securities of Russian issuers for the subsequent execution of sham transactions, the purpose of which was to withdraw funds from the Russian Federation. According to the available data, the owners of these campaigns knew to whom and for what these campaigns were sold, in particular, the Financial Bridge was sold in installments, but the payment of the shares was not made finally, and the campaign, after the license was revoked, was liquidated.