"Bank grave digger" cleared the past 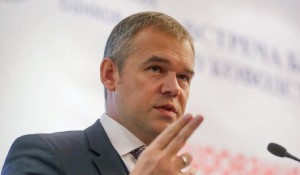 Vasily Pozdyshev leaves the post of Deputy Chairman of the Bank of Russia. During his career in this position, he took an active part in the funeral of more than 500 credit institutions, for which he received the nickname "Bank Gravedigger". However, the banks themselves can not breathe easy. Pozdyshev goes to work in the Fund for the consolidation of the banking sector. Through this fund will be sold banks sanitized earlier on the go-ahead of Pozdyshev. The FSB of the Russian Federation, which, as it became known to Rucriminal.info, turned to the past French citizen Vasily Pozdyshev, can interfere with the victory procession of the “gravedigger” and found a lot of interesting things there.

Vasily Pozdyshev joined the Central Bank of the Russian Federation in 2012, for two years he headed the department of banking regulation. Then the Bank of Russia was headed by Elvira Nabiullina, Pozdyshev became her deputy and stood at the head of a large-scale sweep of the banking sector. He, like a real punisher, personally made decisions to revoke licenses from more than 500 banks, including many large ones. For example, under the “ax” of Pozdyshev, credit institutions such as Vneshprombank, Interkommerts Bank, Mosoblbank, Probusinessbank, Investtorgbank, Bank Rost, Trust, Tatfondbank, Ugra. As a result of these decisions, billions of money of the population and enterprises were ruthlessly sent to the “firebox” of the DIA (Deposit Insurance Agency), which pays people miserable compensation of one and a half million rubles after a long litigation. Cleaning up the banking system, Pozdyshev did not pay attention to the requests of citizens, heads of enterprises, deputies and senators. He even ignored the protests of the General Prosecutor's Office, which revealed violations on the work of the Central Bank (namely Pozdyshev) with the banks of Ugra, Otkritie, BIN and Promsvyazbank. The closest associate of Pozdyshev in his activities was the cousin of his ex-wife Anna Moskaleva (Orlenko), who, as she collaborated with Vasily, became his mistress. Pozdyshev made Anna the head of the director of the banking supervision department of the Central Bank, and then literally carried out a special operation with her. At the end of 2017, Pozdyshev and Orlenko in just 6 months expropriated banking assets from the largest business families in Russia: Wolfson (Belyaev), Aganbegyanov, Mints, Gutseriev, Ananyev. One of the sanitized a couple of banks was Otkrytie, in which Orlenko was subsequently the head of the interim administration.

Sources said that now the Russian and special services are engaged in the present and, in the first place, the past of Vasily Pozdyshev. The FSB dug the history of Pozdyshev very deeply, right up to the archives of Moscow State University of the 80s, and very interesting facts were revealed. Archives from the military enlistment offices were also studied. And again, the inspectors stumbled upon the same story - “due to the lack of military ticket forms,” Lieutenant Pozdyshev was issued a certificate of registration with the district military enlistment office (without photo). Then the traces of Pozdyshev’s military duty are completely lost - Pozdyshev’s military affairs are listed as “destroyed”. Now the special services are trying to understand who and why it was necessary to “clean up” the past of Pozdyshev and his image in his youth. However, one shot was still found in a dusty folder with documents related to the history of student exchange between Russia and France, according to which a second-year student Vasily Pozdyshev went to study finance at the University of Paris Dauphin (this “university” is located in the building NATO Headquarters). Here is the only surviving photograph of student Vasily Pozdyshev, who left for France in 1992. There are those who say that the person in the picture is completely different from the person who is now known as Vasily Pozdyshev. As Rucriminal.info said, already in 1997, Pozdyshev returned to his homeland as the head of the mission for the development of credit and insurance activities in Russia, a specialist in the development directorate of Groupe Paribas SFS.

From 2000 to 2003 He works as vice president of the Athenian branch of Cetelem Bank. Then he becomes a member of the management, curator of the work of large partnerships of the central office of Cetelem SA in France.

And in 2005, Pozdyshev left for Russia with a new mission - as the head of the expert group for the Tacis project “Banking Supervision and Reporting” of the EU Delegation to Russia. Its main task is to transfer to Russian soil the second agreement of the Basel Committee on Banking Supervision regarding the requirements for the sufficiency of banks' own capital (the so-called Basel II).

The Basel Committee is considered a kind of Masonic lodge, and Pozdyshev is its "brother". The second nickname given to him in the financial world is “Vasya Baselsky”. Moreover, this “brother” has French citizenship and, at a minimum, was seen in close relations with local special services.

Thus, it was established that the company STRATEGORUS was operating in France. Her beneficiary was the then-wife of Pozdyshev Lyubov, and Vasily himself an employee. At the same time, in the documents (knowingly or not) his last name was changed from Pozdyshev to Pozyshev. Already in the first months of its existence, the company, which consisted of two spouse employees, received revenues of almost a quarter million euros (profit for other periods was not disclosed). This money came for some consulting services. When filling out the documents, it was clearly indicated that Vasily and Lyubov Pozdyshev were French citizens. It is noteworthy that absolutely in all French documents, Vasily Pozdyshev is still listed as filed in this particular country. This is evidenced by documents from England, from which it follows that in 2009-2010, Vasily lived in London at 10 Sprimont Place, Chelsea, SW3 3HU in a mansion worth over 3 million pounds. It is noteworthy that all relevant English official bases also persistently insist- Pozdyshev is a French citizen.

It is worth noting that despite the divorce from Lyubov (she again took her maiden name), the former spouses maintained a warm relationship. It is for children and ex-wife that Vasily “records” real estate in Paris, Nice and London. Sophie and Marie spend a lot of time with their father.

A person with such an interesting biography was the deputy chairman of the Central Bank, admitted to all levels of financial information. And he is clearly not going to leave the banking system of Russia.