The bank mafia is losing money 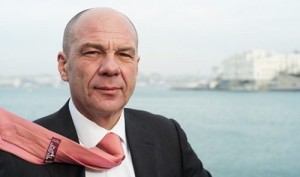 In Moscow, the largest underground banker Ivan Myazin, the closest business partner of the ex-owner of Genbank, Evgeny Dvoskin, was arrested. He is accused of stealing 3.2 billion from Promsberbank. However, this is only an excuse for sending Myazin to jail. Myazin, more than 20 years, was one of the "kings" of naked and transit, billions of "dirty" dollars passed through it. He knows everyone who covered this business in the Central Bank and law enforcement agencies. He can from memory name all the big and not very nudity market players. If Mjazin speaks, then in the jail, bankers, bureaucrats, and siloviki will become the strings. The first one is Evgeny Dvoskin. For many years he was a senior comrade of Myazin, they together owned a bunch of banks. In this regard, rucriminal.info publishes the second part of the archival information of special services. In it, it is just about Mezine. In the third part of the investigation, which will appear on rucriminal.info just the other day, will be told about Eugene Dvoskin.

The composition of the family according to the data from the first department of the Krasnoyarsk Territory:

In February 1990, Myazin was declared a federal search by officers of the Central Internal Affairs Directorate of the Krasnoyarsk Territory on suspicion of committing a crime under part 3 of Art. 144 of the Criminal Code of the RSFSR. In October 1991, the search was terminated due to his detention. There is no information about the previous conviction.

According to the encrypted poll of Myazin I.G. it was established that he was on federal wanted list from 1991 to 1993. Has a conviction a year conditionally. Information from the bases of the Ministry of Internal Affairs of Russia has been deleted.

In a certificate that appeared at the disposal of rucrimin.alfo, it is said that according to the data of the FSB of the Ministry of Internal Affairs of Russia, Myazin was checked for involvement in the organization of the murder of the First Deputy Chairman of the Central Bank of Russia AA. Kozlov. In the same year in a place with D.E. Elbakidze was suspected of involvement in the legalization of money acquired by criminal means, illegal banking activities and evasion from paying taxes in a very large amount.

During the analysis of a number of criminal cases No. 169777, No. 248103 it was established that Myazin, as part of a stable organized community, has involvement in conducting illegal banking operations related to "cashing out", laundering large amounts of money through the following credit organizations (PTP materials):

- CB "European Settlement Bank", was registered with GTU No. 2 of the Bank of Russia, the license was revoked on 06.06.2006 on the basis of 115-FZ. According to the constituent documents of the bank Myazin IG. and AA Kotelnikov. (nickname "Kettle") were the board of directors of the credit institution.

Through the credit organization carried out illegal operations:

Through a credit organization carried out illegal banking transactions:

A certificate issued by the special services published by rucriminаl.info states that Myazin has real estate in the Dominican Republic. On materials (PTP) has a stable business relationship with the head of the MGTU of the Bank of Russia Shor KB.