Arrest for Deripaska due to “old friend” The High Court of London rejected the demand of the former chairman of Vnesheconombank Vladimir Chernukhin to send billionaire Oleg Deripaska to prison for contempt of court. Earlier, Chernukhin won a lawsuit against Deripaska in a London court on charges of an unfriendly takeover of the Trekhgornaya manufactory. Now Chernukhin believes that Deripaska violated the obligation before the court not to dispose of the company's shares in the amount of $ 236 million, removing it from the English jurisdiction. She was reregistered from Jersey to the Kaliningrad Region. But the arrest in an economic dispute is an exceptional measure. It would be another matter if in England a criminal case on the raider seizure of Trekhgorka were considered. Then it would not have been possible without arrest. If not Deripaska himself, then his “right hand” and security guard Arkady Sargsyan. It was he who directed the capture of Trekhgorka. According to Rucriminal.info sources, since the 90s, Sargsyan has been covering Deripaska through law enforcement, special services and the mafia, and at the same time has been carrying out military operations for the oligarch.

In 2010, the former partners met in Davos, where Mr. Deripaska allegedly promised to buy back Vladimir Chernukhin’s stake in Navio for $ 100 million, but never did. Instead, the Strong Mountain guys seized the Three-Mountain Manufactory under the leadership of Arkady Sargsyan. During the trial, a video was shown on which a group of people was surrounded and then thrown onto the floor of a man named the head of the security service of the Three-Mountain Manufactory. The footage shows that the men take the head of the security service by hand and take him to the corridor. Then there the lights go out for a few seconds. The man is on the ground, after that he is taken by the hands and taken to the side (where exactly, it is impossible to understand from the video). One of the people in the video is Arkady Sargsyan. He, like other attackers, was called at the trial “Deripaska’s fighters”. The oligarch himself in court, when asked if he would have used Sargsyan in case of problems, answered: “Yes, in the 1990s.” The director general of Trekhgornaya manufactory Dmitry Novikov (speaking as a witness from Deripaska) said in court that Sargsyan had been involved in Deripaska’s security issues until the early 2000s. 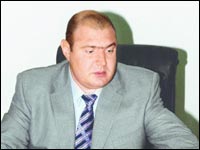 According to Rucriminal.info, back in the 1990s, the former partners of Oleg Deripaska, while the co-owner and general director of the Sayan Aluminum Plant (SaAZ), offered the young businessman assistant Arkady Sargsyan, a man associated with the security forces of Khakassia, where he is located SaAZ. Sargsyan became an active participant in the criminal warriors around SaAZ, and then some other enterprises of Deripaska, which subsequently entered the holdings Siberian Aluminum and Russian Aluminum. In a short time, Sargsyan acquired contacts with security forces at the federal level. He also improved relations with mafia leaders, for example, with thief in law Vladimir Tyurin (Tyurik).

However, later with a graduate of the Nakhimov School, in 1976-1994. serving in the Baltic Fleet, political ambitions leaped. He wanted to become a member of the Federation Council. It was not without difficulty that they managed to persuade Alexei Lebed, the head of the Government of Khakassia, to nominate the former head of the SaAZ security service from the Supreme Council of the Republic. But, becoming a senator, Sargsyan was engaged in anything but legislative work in the upper house of the Russian parliament. At meetings he could be seen no more than once a quarter. And such behavior, of course, did not go unnoticed by the leadership of the Federation Council. Last year, the patience of the chairman of the upper house, Sergei Mironov, ran out, and on his initiative Arkady Sargsyan was recalled from the senators.

From that moment, Arkady Sargsyan began to behave somewhat inappropriately. In particular, he tried to write a statement to the Prosecutor General’s Office about instituting criminal proceedings against Mironov for allegedly “arbitrariness” and “abuse of authority”. Moreover, the statement - for solidity - was written on the form of the Basic Element Group.

In order for Sargsyan to "cool off" a little, he was sent to Israel, and upon his return, he was already ready for the place of the State Duma deputy in the LDPR. From 2007 to 2011, Sargsyan was a parliamentarian.

And in 2011, Oleg Deripaska appointed Sargsyan as curator of his construction sector, which included Glavstroy, Baselcement and Transstroy.

Sargsyan, together with Deripaska from his first steps in business, was always behind him. Therefore, it is extremely doubtful that allegations that the leader of the Izmailovo organized crime group Anton Malevsky was a forced roof for Oleg Deripaska. Namely, with such arguments, Deripaska is trying to "fight back" from US sanctions because of ties with the mafia. According to Rucriminal.info, in the 90s Sargsyan had a huge influence in the criminal world and powerful ties in the power block. In the last resource, he was significantly superior to Malevsky. Therefore, another question is, whose roof was in those years.

The fact that the leaders of the Izmailovsky organized crime group Anton Malevsky and Sergey Popov were not a “roof”, but the usual business partners of Oleg Deripaska, is indicated by many witnesses. According to Mikhail Cherny, "Malevsky, Popov and Deripaska became friends and met often." Popov even became the godfather of Deripaska.

Zhanna Malevskaya, the widow of Anton Malevsky, indicated that their family was close friends in the Deripaska family, he came to their family celebrations in Israel. “On August 9, 1997, Deripaska was invited to our daughter’s birthday in Tel Aviv as a family friend,” follows Malevskaya’s testimony.

Anton Malevsky’s brother Andrei Malevsky told reporters the following: “- I saw exclusively business relations between Oleg Deripaska and my brother. My brother always spoke very highly of Oleg. He said that this is one of our most promising young business leaders. At least I did not observe any coercion to anything that Deripaska was talking about. I can only repeat the phrase of Mikhail Cherny: did Anton force Deripaska to become the richest man in Russia? ”

According to the interlocutors of Rucriminal.info, the statements about the “roof” are also doubtful because Arkady Sargsyan, who served as the head of the security service, was always behind Deripaska. “Arkady Rafikovich ... kicks open the doors to the rooms of the Family. Secondly, it was he who brought Oleg Vladimirovich (Deripaska-Red) with Tyurik (thief in law Vladimir Tyurin-Red.) .. In fact, Sarksiyan is responsible for special projects in the “aluminum empire”. Tyurik is “torpedoes”, no more, but “torpedoes” need a “law enforcement roof”. Sargsyan solves these issues, ”the eyewitnesses described the role of Sargsyan under Deripaska.

Therefore, absolutely all sources of Rucriminal.info, believe that Anton Malevsky was really a friend and equal business partner of Deripaska, and not a “roof”. On the contrary, on the part of the security forces, it was Deripaska and Sargsyan who helped Malevsky. And help from time to time was required for him, as cases were brought against him, then he was put on the wanted list. Here are extracts from those times about the problems of Oleg Deripaska's friend and business partner Anton Malevsky of those times. 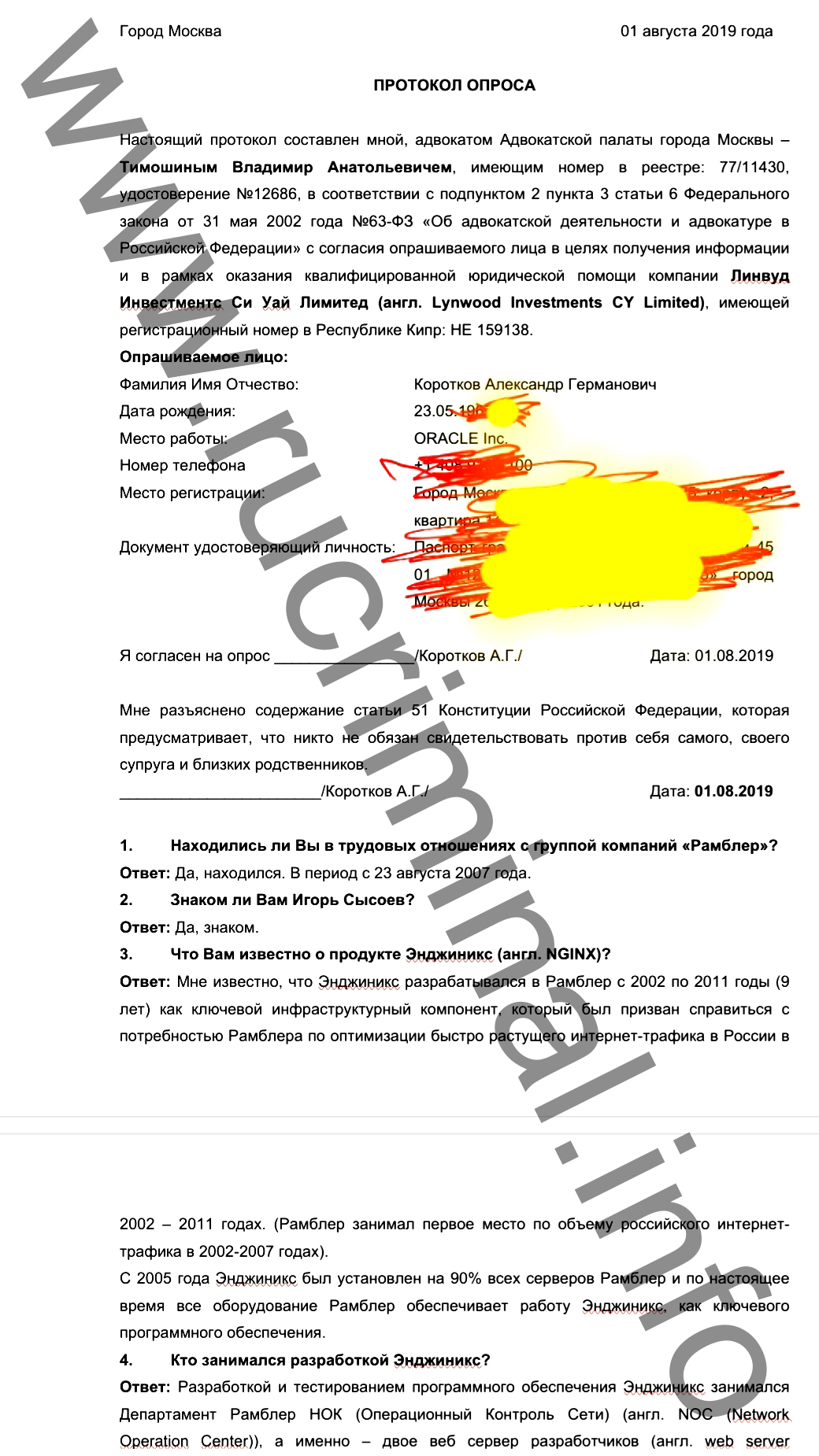