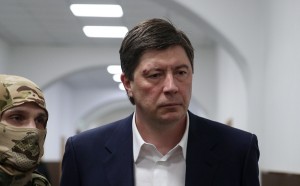 The former owner of the Bank "Ugra" Alexei Khotin, who is under house arrest on charges of embezzlement (160 criminal code), in the near future may add problems with the security forces. According to Rucriminal.info, this time in connection with the investigation of criminal cases against the head of the banking Department of the "K" FSB of Russia Kirill Cherkalin and his predecessor Dmitry Frolov. During the searches were seized amount of 12 billion rubles. These are bribes received for patronage of a number of banks. One of the main "donors" of security officers, according to operational data, was Alexei Khotin. Now he faces new charges - in bribery (291 of the criminal code). It is thanks to these offerings, the Bank-"vacuum cleaner" "Ugra" existed for so long.

Bank "Ugra" in the middle of 2016 attracted more than 166 billion rubles from individuals. at the same Time, Bank "Ugra" issued 154 billion rubles (almost all funds of depositors) loans in foreign currency for a period of more than 3 years.  The recipients of loans are all legal entities. The audit of the Central Bank of the Russian Federation revealed that a significant part of these legal entities did not conduct any activity and they did not have to rely on the fact that they would return the money. Investigation rucriminal.info showed that all of these "dummy" controlled by Yuri and Alexei Hodinami owners of "Yugra". Simply put, the father and son EN masse let all the funds of depositors and creditors of "Ugra" for personal needs and the needs of their business.

The Central Bank caught on too late - when the Bank "Ugra", offering higher rates on foreign currency deposits, managed to collect huge sums from the population. Only in March-April 2016, after checking "Ugra", the Bank introduced restrictions on the acceptance of deposits. And then the Bank revoked the license.

What Hominy rocked means "Yugra" in their own pockets, visible even to the naked eye. They didn't bother to buy new technical firms, and used "old", involved earlier at raider captures and become unnecessary.

LLC Moscow plant of synthetic detergents (MZ SMS) receiving the credits from Bank Yugra was created in 2000 for participation in capture of buildings of two plants - MZ SMS and the Moscow soap factory ( one of the first objects received by Hotin In the capital). Now on the site of these two plants is a business center "Capital". Its name is present in the name of another company-borrower — LLC "Capital".  After capture of objects, the MZ SMS firm was involved four more years by Hotin, and since 2005-2006 became actually "dead" and didn't conduct almost any activity. "Revived" LLC "MZ SMS" to get money from the Bank.

As found out Rucriminal.info, "Finmarket" is one of the Khotyn "layers", which at one time was engaged in collecting payments from tenants belonging to the father and son of business centers, including the river Side center. Since Hotins "throw" all tenants, in particular, do not return them security fees for two months of rent, such collecting firms have to constantly change because of the huge number of claims and lawsuits. When "Finmarket" served and became unnecessary, it was useful for the transfer of funds to his account "Ugra". One time collection of funds from tenants of malls owned Hominy, engaged and other borrower - Tekhmetod, OOO. Its CEO was listed as Maya S. Alongi , who concurrently was the nominal owner of 9.42 % of the Bank "Ugra". Nominal, as the Bank for a long time belongs to the family of Khotyns, but they hid behind their subordinates, on which they issued shares.

Under huge pressure from the CBR in 2016, Alexey Khotin admitted that he controls more than 52 % of the Bank "Ugra".

By the way, the river side BC mentioned earlier is the address of a significant part of the Bank's borrowers, in particular Abigail CJSC. "BC Mikhailovsky", "Nizhny Novgorod", "Red hero" are the names of business centers owned by Khotin. And the firms of the same name issued on figureheads, were used at different times in activity of these objects. In the lean family of Khotin, even the used technical firms do not disappear and then they were used to withdraw the assets of the Bank "Ugra".

As a result, the CBR came to the conclusion that all of these firms-borrowers "Ugra" no real activity or it is carried out in small amounts.