Why "prince" Kenes Rakishev was ashamed of Ramzan Kadyrov's "brother" 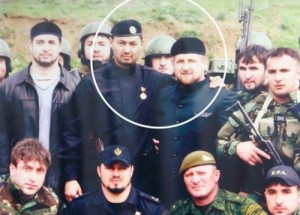 The sports.ru edition has investigated the appearance of money from the Akhmat football club. The journalists found out that, if you do not take the information sponsor (the local TV and radio company) and the technical one (adidas) - they do not bring money - the club has only three sponsors: the Kadyrov Foundation, SAT & Company and the Moscow Industrial Bank.

The most interesting of them is SAT & Company - a company of a businessman from Kazakhstan Kenes Rakishev, registered in Almaty. In 2011, she had a legal entity in Russia, but it has already been liquidated. According to the official website, the holding includes more than 30 companies dealing in metals and alloys. It also lists sponsorship activities in sports: football, boxing, tennis and chess. However, the section "Football" contains information only about the support of the national team of Kazakhstan. Moreover, the company has never publicly announced its support for Akhmat. The piquancy of the situation is due to the fact that there is a SAT & Company logo on the T-shirts of Akhmat's players, and money is regularly transferred from it to the club's budget. However, the company itself with that name no longer exists. The main SAT & Company was renamed Fincraft Resources back in 2018.

Why is it so mysterious? It's simple. Fincraft Resources (SAT & Company until 2018), like other Rakishev companies, is actively working in the United States, is closely connected with the United States, conducts business there, and sells shares on the local exchange. And the United States imposed sanctions on Ramzan Kadyrov, and the asset freeze threatens all companies that continue to cooperate with the head of Chechnya. And Rakishev cannot completely break off all his relations with Kadyrov for a simple reason, which Rucriminal.info previously wrote about, and recently published his investigation, Project. Kadyrov is Rakishev's hidden business partner.

The "project" found out that one of the participants in the story of the massacre on Rochdelskaya Street, the oligarch from Kazakhstan Kenes Rakishev uses the power capabilities of Ramzan Kadyrov to seize new assets and resolve business disputes. In exchange, Kadyrov's representatives become co-owners of the assets received by Rakishev. For example, these include the "Vitino Management Company" (oil port). It was one of the assets of Mukhtar Ablyazov in Russia, and Rakishev was hunting him. All legal work was done by his devoted lawyers Vladimir Timoshin and Maximilian Grishin. And the power part of the issue was decided representatives of Rakishev's Chechen friends. As a result, in 2015, the port became the property of the Vitino Management Company controlled by BTA Bank (this former bank of Ablyazov was also acquired by Rakishev). But the founders of this company were not Rakishev or BTA Bank, but some Dmitry Shivkov and Dmitry Filatyev. Shivkov is the brother of Pavel Krotov's wife. Krotov is the official representative of Kadyrov-Delimkhanov in various business projects. In this regard, according to eyewitnesses, Rakishev's opponents can be beaten and imprisoned.

At one time, the head of Chechnya, Ramzan Kadyrov, deleted all congratulatory messages on social networks to his friend and business partner, Kazakh oligarch Kenes Rakishev. This happened after the US authorities announced the strengthening of measures against persons who have financial relations with Kadyrov. And Rakishev certainly belongs to such persons. 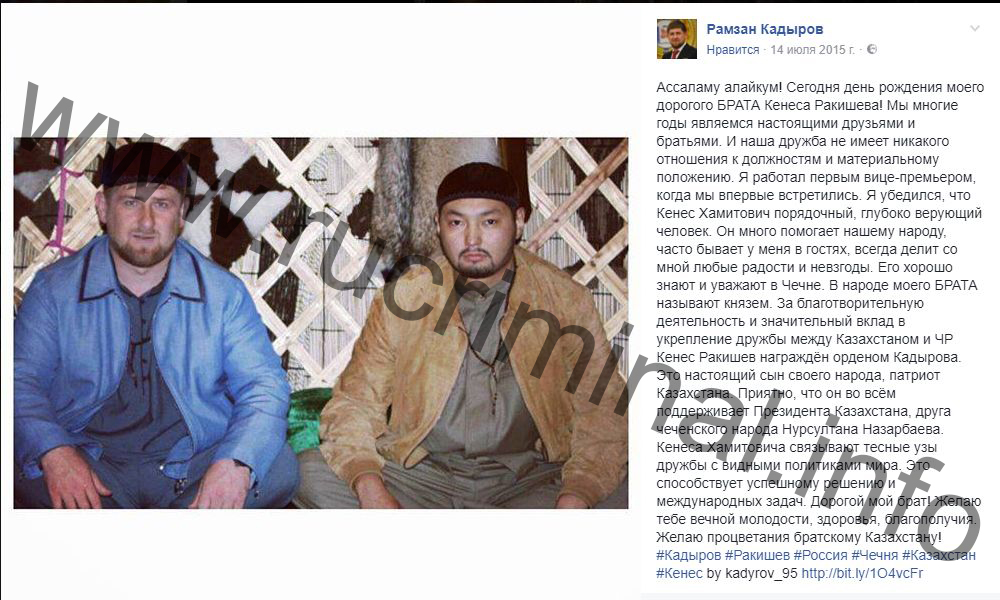 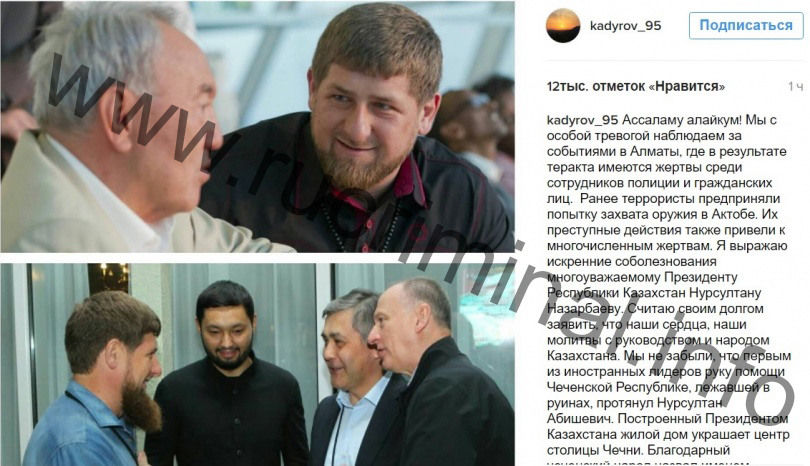 In response to a request from two members of the US House of Representatives, a State Department spokesman said that the department is monitoring Kadyrov's "growing ties", both around the world and in the UAE and other Middle Eastern states. The State Department said it "will continue to collect data on the nature of the entrepreneurial activities of the politician and his entourage outside of Russia." The United States added Ramzan Kadyrov to its sanctions list in 2017 based on the so-called Magnitsky Act, which allows the US authorities to impose personal restrictions on those responsible for violations of human rights and the rule of law in Russia.

According to Rucriminal.info sources, the State Department's statement on the collection of data on persons who have relationships, including financial ones, with Kadyrov, caused Kenesav Rakshev to panic. He is the first who should come under the control of the State Department and also come under sanctions. The source calls Rakishev the person who promotes the interests of Kadyrov's friend in England. Previously, he promoted Kadyrov's interests in Kazakhstan. In these photos Kadyrov and Nursultan Nazarbayev; Rakishev, Kadyrov and former director of the Russian FSB, head of the Security Council Nikolai Patrushev.

This is only part of Raktishev's problems. As Rucrininal.info told, Rakishev's close connection with another member of the “Magnitsky list”, the investigator of the Ministry of Internal Affairs of the Russian Federation Nikolai Budilo, was revealed. Rakishev conducts informal communication with him through his lawyer Vladimir Timoshin. Together with Timoshin, Rakishev became a participant in the story with an attempt to capture Nginx through a criminal case, which caused a big international scandal. We have published the relevant documents.

Timoshin, by the way, at one time "lit up" in the story of the theft of money paid to the structures of William Browder to the budget of the Russian Federation. Timoshin "worked" with the documents of the Dalnyaya Steppe company involved in the gigantic scam. Lawyer Sergei Magnitsky, who exposed her, died in prison. The case in which Magnitsky was arrested was conducted by the Investigative Department of the Ministry of Internal Affairs of the Russian Federation. Nikolai Budilo, a close friend of Timoshin, who was a member of the operational-investigative group, was included in the “Magnitsky list”.

Rucriminal.info decided to restore the deleted congratulations of Ramzan Kadyrov to his close friend and "brother" Kenes Rkishev.

The head of Chechnya, Ramzan Kadyrov, on his Instagram page, congratulated the Kazakh oligarch Kenes Rakishev on his birthday. "Today is the birthday of my dear BROTHER Kenes Rakishev! We have been true friends and brothers for many years. And our friendship has nothing to do with positions and financial situation. I worked as First Deputy Prime Minister when we first met. I made sure that Kenes Khamitovich a decent, deeply religious person. He helps our people a lot, often visits me, always shares any joys and hardships with me. He is well known and respected in Chechnya. The people call my BROTHER a prince. For his charitable work and significant contribution to strengthening friendship between Kazakhstan and the Chechen Republic Kenes Rakishev was awarded the Order of Kadyrov. This is a real son of his people, a patriot of Kazakhstan. It is pleasant that he supports in everything the President of Kazakhstan, a friend of the Chechen people Nursultan Nazarbayev. Kenes Khamitovich has close ties of friendship with prominent politicians of the world. This contributes successful solution of international problems. My dear brother, I wish you eternal youth, healthy oh, well-being. I wish prosperity to fraternal Kazakhstan! "- he wrote.

“Assalamu alaykum! Today is the birthday of my dear brother Kenes Rakishev! We have been true friends and brothers for many years. And our friendship has nothing to do with positions and financial situation. I was working as First Deputy Prime Minister when we first met. I became convinced that Kenes Khamitovich is a decent, deeply religious person, "the head of Chechnya wrote on his Facebook page.

Kadyrov noted that Kenes RAKISHEV provides charitable assistance to the Chechen people, and explained why the Kazakh businessman is loved in Chechnya.

"He helps our people a lot, often visits me, always shares with me any joys and hardships. He is well known and respected in Chechnya. The people call my BROTHER a prince. For his charitable work and significant contribution to strengthening friendship between Kazakhstan and Chechen Republic Kenes Rakishev was awarded the Order of Kadyrov. He is a real son of his people, a patriot of Kazakhstan. It is pleasant that he supports the President of Kazakhstan, friend of the Chechen people Nursultan Nazarbayev in everything, "the Chechen leader emphasized in his congratulatory message.

Kadyrov calls Rakishev a brother and appreciates the relationship with him.

"Kenes Khamitovich is linked by close ties of friendship with prominent politicians of the world. This contributes to the successful solution of international problems. My dear brother! I wish you eternal youth, health, prosperity. I wish prosperity to fraternal Kazakhstan!" - concluded Kadyrov.