The defeat of the TFR by the Prosecutor General's Office Investigative Committee Chairman Alexander Bastrykin appealed against the refusal of the Deputy Prosecutor General Anatoly Razinkin to bring the case against Major Generals, former Deputy Heads of the Investigation Department of the Ministry of Internal Affairs of the Russian Federation Alexander Krakovsky and Alexander Biryukov, as well as former investigator Alexander Bryantsev to court "In accordance with the arguments presented in the complaint, the decision of the Deputy Prosecutor General of the Russian Federation is unfounded, contradicts the available materials, and therefore must be canceled," the document, which was published by the VChK-OGPU telegram channel, says. A source from the Telgeram channel said that before the Prosecutor General's Office of the Russian Federation refused to submit the case against the generals of the Ministry of Internal Affairs of the Russian Federation to court, Igor Krasnov discussed the situation with the president. Vladimir Putin was surprised when he learned that Interior Minister Vladimir Kolokoltsev, in order to achieve personal goals, convinced the head of the TFR Alexander Bastrykin to initiate a case against the generals without a single proof and send them under arrest. For Kolkoltsev, the task was to remove the head of the SD of the Ministry of Internal Affairs of the Russian Federation, Alexander Romanov, whom he considered the main and dangerous contender for the minister's chair. After the arrest of the generals, Romanov left his post. But in this way the entire police investigation was discredited. 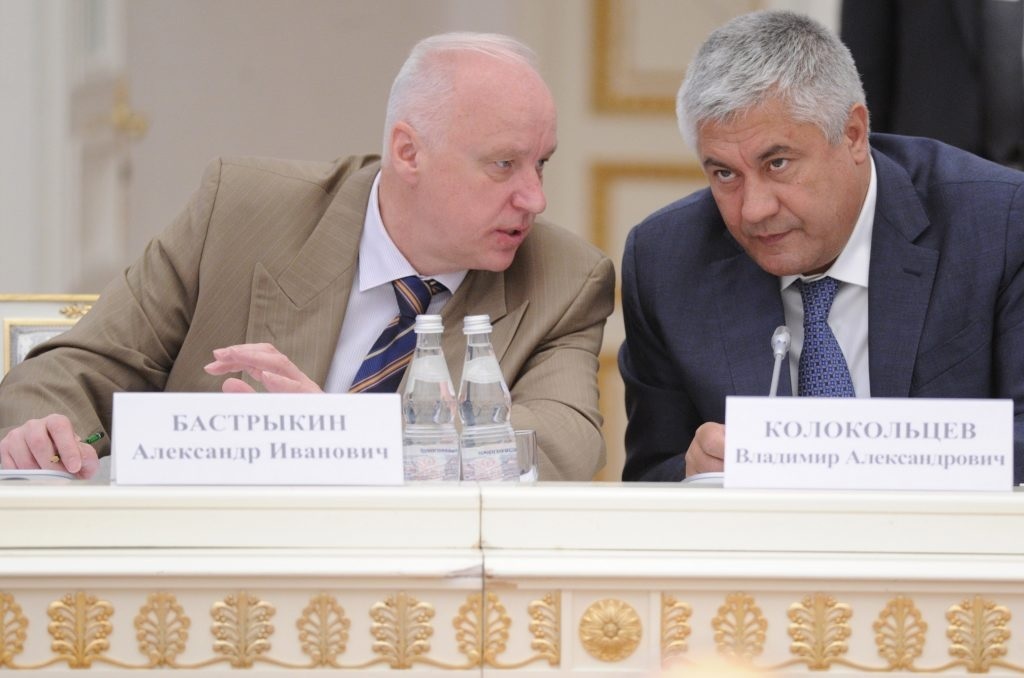 Rucriminal.info has Razinkin's decree at its disposal, and it is simply devastating for the TFR. The term for consideration of the received criminal case was extended to 30 days, that is, until 05/19/2021.

It follows from the indictment that Biryukov, Krakovsky and Bryantsev in 2019, acting out of selfish interest and using their official powers, contrary to the interests of the service, created conditions for the termination of the criminal prosecution of the owner of Aviasity LLC, Khudoyan A.A. for the theft of the property of his business partner Govyadina S.The.

According to the investigators, hoping to receive remuneration from Khudoyan in the future, they organized a change in the preventive measure chosen against him in the form of house arrest, as well as the cancellation of interim measures imposed on three land plots on which Aviasiti LLC carried out construction apartment buildings, which entailed grave consequences in the form of causing material damage to Beef.

A study of the criminal case established that the charge brought against Biryukov, Krakovsky and Bryantsev did not meet the requirements of Art. Art. 7, 73 and 171 of the Code of Criminal Procedure of the Russian Federation, and the conclusions of the investigation about the guilt of these persons contradict the actually established circumstances and are based solely on assumptions. No objective evidence has been obtained of the mercenary and other personal interest of Biryukov, Krakovsky and Bryantsev in making procedural decisions in the criminal case against Khudoyan. The fact of the onset of socially dangerous consequences as a result of the actions of the accused, including in the form of causing damage to beef in the amount of 4.3 billion rubles, has not been confirmed by anything.

The reason for bringing Biryukov, Krakovsky and Bryantsev to criminal liability was Govyadin's testimony about their possible material interest in making procedural decisions in the criminal case against Khudoyan.

In particular, Govyadin explained that in July 2019 he met with an unknown man named "Ashot" who represented Khudoyan's interests, who offered $ 5 million to settle the differences between them, stating that otherwise Khudoyan, using his connections, will achieve the termination of the criminal case. In this regard, Govyadin suggested that the decision to change Khudoyan's preventive measure and release the arrest imposed on land plots was due to the selfish interest of the employees of the Investigative Department of the Ministry of Internal Affairs of Russia.

These testimonies are presumptive, vague and not supported by any other materials from the criminal case. The investigation has not established the identity of "Ashot". The interrogated witness Khudoyan stated that there is no such person among his defenders and representatives, he did not transfer money and other property to any of the employees of the Investigation Department of the Ministry of Internal Affairs of Russia and did not intend to do this, he had no unofficial contacts with them.

The subordinates of Biryukov and Krakovsky explained that they had not received any unlawful instructions in the interests of Khudoyan. Checks in the criminal case against Khudoyan were carried out on complaints of his lawyer Chizhikov, the removal of the criminal case from the proceedings of the Main Investigation Department of the Main Directorate of the Ministry of Internal Affairs of Russia in Moscow and its transfer to the central the apparatus of the Investigative Department of the Ministry of Internal Affairs of Russia were caused by violations of the law and red tape committed during the investigation, about which they reported to the management in accordance with the established procedure.

Former head of the Investigative Department of Russia A.V. Romanov testified that the actions of his deputies in the criminal case against Khudoyan were in good faith and were committed within the limits of their powers.

Biryukov, Krakovsky and Bryantsev testified that the appeal of the lawyer Chizhikov was considered at the direction of Romanov, who ordered to resolve the complaint with a study of the criminal case against Khudoyan. As a result, instructions were sent to the Main Investigation Department of the Main Directorate of the Ministry of Internal Affairs of Russia in Moscow to eliminate violations committed during the investigation that were not fulfilled. This was reported to Romanov, who ordered to withdraw the case and transfer it to the central office of the Investigative Department of the Ministry of Internal Affairs of Russia. The defendants also explained that they acted within the framework of their powers and in accordance with the law.

The decisions to remove the arrest from the property and to change the preventive measure for Khudoyan were based on the fact that the act incriminated to him relates to the sphere of entrepreneurship and arises from a dispute between economic entities. The land plots are owned by the city of Moscow, and their arrest could lead to a halt in construction, which would violate the rights of equity holders.

The materials of the operational-search activity contained in the criminal case do not contain evidence confirming the commission of crimes by Biryukov, Krakovsky and Bryantsev, including the existence of a criminal conspiracy and contacts with Khudoyan and his representatives.

From the materials of the criminal case against Khudoyan, it follows that the measure of restraint chosen against him was changed at the request of the investigation by the Tverskoy District Court of Moscow, the decision of which was made in accordance with the established procedure, entered into force and has been canceled to date, In addition, after the transfer In the criminal case against Khudoyan, no measures were taken by the Main Investigative Directorate of the Investigative Committee of Russia to re-arrest him. The above land plots were not seized; the court, at the request of the investigation, imposed restrictions only on the right to lease them.

Thus, in the criminal case, there is no evidence confirming the guilt of Biryukov, Krakovsky and Bryantsev in the commission of the alleged crime. It was also established that for effective work, an investigative group of 22 investigators was created. However, the investigation of this criminal case, which is not distinguished by its factual and legal complexity, has become clearly protracted.

Within 3 months (May, August and October 2020), investigative and procedural actions were carried out for no more than 3 days. As a result, the duration of the investigation was over one year, despite the fact that the subject of the investigation was an act committed within one constituent entity of the Russian Federation. The circle of suspected persons was determined at the stage of initiating a criminal case; a large volume of investigative actions and complex expert studies were not required. The materials of the criminal case comprise 81 volumes, 46 of which contain copies of documents from the criminal case against Khudoyan and annexes to the examination protocols that have no evidentiary value. The violations committed prevent the approval of the indictment and the referral of the criminal case to the court for consideration on the merits. Based on the foregoing and guided by paragraph 15 of part 2 of Art. 37, paragraph 2, part 1 of Art. 221 of the Code of Criminal Procedure of the Russian Federation,

Criminal case o 12002007703000078 on charges of A.A. Biryukov, A.M. Krakovsky Bryantseva A.Yu. committing a crime under Part 3 of Art. 285 of the Criminal Code of the Russian Federation, return to the investigator for additional investigation and elimination of the identified deficiencies."