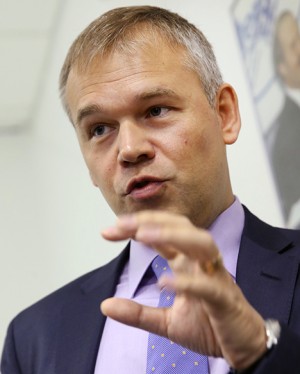 In 1995 he graduated from Paris-IX Dauphine University, Paris.

In 2010, the He graduated Ecole Nationale d`Administration, g. Strasbourg.

1988-1989 - the adjuster of control and measuring devices and automatics, the operator of the second-class computer of the Gorky Aviation Production Association. Sergo Ordzhonikidze, the city of Gorky.

1995-1997 - Specialist of the planning and control department of Compagnie Bancaire (Groupe Paribas), Paris.

1997-1998 - Head of Mission for the Development of Credit and Insurance Activities in Russia, Specialist of Development Directorate of Groupe Paribas SFS, Paris, Moscow.

2005 - Head of the Expert Team on the Tacis Project "Banking Supervision and Reporting" of the EU Delegation to Russia, Moscow.

2006-2009 - executive director, member of the board of directors of the investment fund EcoLive SA, general director of the management company EcoLive Ltd, Luxembourg, London.

2010-2012 - Deputy Chairman, curator of the "Finance and Risks" section of the Moscow Bank of JSC "Sberbank of Russia".

2012-2014 - Director of the Banking Regulation Department of the Bank of Russia, Moscow.

Since 2014 - Deputy Chairman of the Central Bank of the Russian Federation, Moscow.

Member of the Board of Directors of the Bank of Russia (appointed June 16, 2015).

He speaks English, French and Greek.

He is married and has three children.

Attempt of the General Prosecutor's Office to check some facts connected with the scandalous case of the bank "Ugra" seems to have led to unexpected results. According to the newspaper "Our Version" (04.08.17), two representatives of the Central Bank, who were expected to attend the meeting on July 26, did not come to the law enforcement agencies, and one of them - the deputy chairman of the Central Bank Vasily Pozdyshev - according to the newspaper, "did not become teasing fate and, apparently, has already left Russia. " Earlier, the Prosecutor General's Office did not wait for several more officials connected with the "Ugra" case, whom they decided to take to the conversation forcibly.

According to media reports, Pozdyshev hurried to leave the country and, probably, is in France. There is also information about the official's French citizenship, which raises a number of questions about how the deputy got his post.

Of the latest "projects" Vasily Anatolyevich should pay attention to credit organizations such as OJSC "Growth Bank" and JSC KB "Kedr", where, incidentally, Vasily Anatolyevich is in partnership with the owner of the banking group, Mr. Karchev. Pozdyshev long covered these banks. He deftly managed to convince his colleagues in the Central Bank that "Growth Bank" is about to "self-recover": shareholders, they say, will provide the bank with financial assistance. Do not just stop these banks from attracting people's deposits. At the same time, it should be noted that in 2014 the volume of attracted deposits in the bank "Kedr" exceeded 19 billion rubles, and the volume of distressed debt 16 billion rubles. And all this rubbish trash increased year by year. But, in the end, it was decided to rehabilitate. Vasily Anatolievich was very interested in attracting Tatfondbank to sanitation, which already had a financial recovery for BTA Kazan.

Lobbying of these interests came down to the Chairman of the Bank of Russia. Pozdyshev personally gave orders to his employees, so that in the conclusions on these banks there was no information on the actual state of affairs. Then came to Nabiullina and urged not to apply sanctions to these banks! However, here it is necessary to give her due, sanator decided to appoint OJSC "Binbank".

Next to the bank is Svyaznoy. Now this credit institution is in active development with Pozdyshev, since he is connected by friendship with the owner of the group "Svyaznoy" Nogotkov. The fact that the bank, as well as its shareholder Nogotkov problem, does not know, probably only lazy. In this regard, the uninitiated may not understand where the regulator is looking, even thinking about sanitation. Even the figures for 2014 speak for themselves.The volume of deposits of individuals is 42 billion rubles, the loan portfolio is 43 billion rubles, of which 26 billion rubles are problem loans.

Given the above, it is not difficult to guess what the matter may end. Pozdyshev now only had to "promote" his sanatorium! ..

Since the appointment of Vasily Pozdyshev deputy chairman of the Central Bank with the powers of the chief watcher of all our bankers, it took exactly two years. We congratulate Vasily Anatolyevich Pozdyshev with two years of service! And we will marvel at his successes.

This hyperactive official, despite the resistance of all bankers, nevertheless included a "full Basel" in the country. After this event Vasily Pozdyshev, hastily went to report to his native, Masonic lodge - the International Basel Committee.

Far from the needs and aspirations of Russia, the Basel Committee and the IMF, its course was praised in their reports and even gave another order, masonic, and how could it be otherwise? Their agent has already destroyed almost half of our banking system !!! All in all there are 600 half-alive banks in the country, and in some regions there are no banks except Sberbank. For example, in the Leningrad region, Vasily Anatolyevich recently closed the last bank. He belonged not to some crooks, but to the regional administration, and nothing, all the chief supervisor gets away with it.

In just two years of his active work, Vasily Pozdyshev has probably beaten a world record - he closed about 300 already !!! Banks, this is an average for a bank every other day, if you rest on the weekend. The name of this CBN has become a household name in banking circles: "Vasya will come anyway", "Vasya will come to you and you will be finished", "everyone is waiting for Vasya" - these are the words you often hear in private conversations of bankers.

According to sources close to the supervisory block of the Central Bank, Vasiliy Baselsky has mental abnormalities. Let's note his appeals for interethnic and religious strife among the staff of the Central Bank. Islamic banks Vasily Anatolievich does not favor, for example, the largest banks of Tatarstan are now under his severe supervisory pressure. Well, the bankers with Chechen and other Caucasian roots, "European" Vasya Baselsky gnobits quite "black", not embarrassed by his colleagues in expressions that clearly incite ethnic strife.

Even the bankers of the "blacks" refuse to accept in their office. Arranging them, collective, supervisory pressures or sends them to another supervising "lady" - Olga Polyakova, the Moscow boss of the Central Bank. This is her, the investigation of journalist Oleg Lurie discovered millions of dollars on accounts in Swiss banks. Well, the Prosecutor's Office will deal with this. The author is sure that ordinary employees of the supervisory block, brought to such desperation by such leadership (according to rumors in the Central Bank there were suicides), it is unlikely to remain silent if they are summoned for interrogation to prosecutors.

Vasily Pozdyshev appeared in the Bank of Russia relatively recently - in 2012. Then he headed the Department of Banking Regulation, and two years later he grew up to the current chair, from which he oversees the supervision of credit institutions. It would seem that before our very eyes a very solid career is being built. Here only in the resume the official has not less interesting records: BNP Paribas, the representation of the European Union in Russia, the Savings Bank.

That is, a native of Gorky could choose any path to shining heights, but he stopped at the most notable position in the Central Bank. Demonstrative detail: after leaving Sberbank, Pozdyshev lost in income more than 5 (!) Times. But the man has a family, children, who are currently three. What prompted the financier, who had worked abroad for many years, on such a non-obvious career?

Another situation arose with the "Growth of the Bank" and the bank "Kedr". According to reports, Pozdyshev for a long time helped their owners, not allowing the regulator to "clean up" the organization. And the lobbyist of the structures was not particularly hiding, giving direct instructions to his subordinates to hide the situation of children in financial institutions. It all ended perfectly well: "Growth Bank" was bought by "Binbank", "Cedar" also painlessly merged into the structure of the industry giant.

Also it is known about the sympathies of Pozdyshev to the bank "Svyaznoy", which, despite the known problems, is still functioning.

It's not for nothing that in the banking circles there have already appeared characteristic comments of the name Pozdyshev: "Vasya will come anyway", "everything, we are waiting for Vasya". Black humor, of course, makes life easier, but it hardly extends it.

For more than a month, Vasily Pozdyshev, a prominent official who still holds the post of deputy chairman of the Bank of Russia, is abroad, in France, on the Cote d'Azur. He went there on July 26 in great haste, received a call to the Prosecutor General's Office. Law-abiding citizens, as a rule, do not behave this way. But after all "the law-abiding citizen" is at all about Pozdyshev.

After the official's flight, close attention was paid to his person - and this in addition to the Prosecutor General's Office - in the Federal Security Service. It is reported that the Chekists began to collect "operational information" on the financier and all those who may be involved in his fraud. It is possible that very soon we will learn in detail about the abuses of Pozdyshev as deputy chairman of the Central Bank, his accomplices, and the damage he inflicted on the state, the domestic banking system and clients of credit institutions.

Indicative moment: even in a panic leaving Russia, Pozdyshev did not calm down and continues to inflict blows on Ugra. Rather, by its main shareholder Alexei Khotin, from abroad ordering the placement on specific resources of inadequate information. For example, in those days when the owner of the bank offered the Central Bank a plan for saving the organization, suddenly there was a message that he ... left the country.

And what an irony - to hit the run was himself Pozdyshev! Of course, the present zeal of the siloviki is commendable. Let many of the notorious "operational information" and was known long before the escape of the first deputy chairman. Separate details, worthy of attention of law enforcement officers, surfaced in public space during the period of Pozdyshev's stay in Russia. Why was not the official bred directly in the workplace, as he deserved?

However, it's better late than never. Let's hope that the crime will be followed by punishment. Especially, the flight of a bank killer in itself is one of the brightest proofs of his guilt.