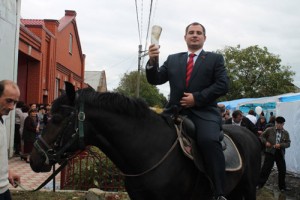 Dossier:
Among Hugaeva protégé was the second secretary of the SCM Maxim Suraykin. This "young communist" became one of the main organizers of the Kyrgyz Republic and its structure is likely to act as the right hand of fathers - founders: Anton Belyakov and Konstantin Zhukov. By the way, it is not only Suraykin technologist team Belyakova, but his official assistant as a deputy of the State Duma.
... "Traditional" Communists have already named the "Communist Russia" pro-Kremlin project designed pulling their electorate. Thus, according to a State Duma deputy from the Communist Party Sergei Obukhov, a new organization in the elections could well enter into an alliance with the "United Russia". In addition, members of the Communist Party say, if they have reliable information about the financing of "Communist Russia" - "Fair Russia" and that in order to verify this fact ostensibly already sent requests to the Prosecutor General.
Compromising, 02.06.2009

Recall, today the initiative to dramatically tighten fiscal policy made by the representatives of the party "Communist Russia". Its chairman Maxim Suraykin suggested the central bank to restrict the sale currency to natural persons a maximum of $ 500. This measure, according to Suraykin, "will not allow speculators to play on the nerves of the citizens." Economists took this idea very negative: in it they see the conditions for the creation of a black market in Russia.
Novaya Gazeta, 11.11.2014

According to representatives of the political forces, to performers, supported the Ukrainian Maidan, can be attributed Zemfira Ramazanova, Andrei Makarevich, and a number of other artists, who spoke in support of the "Kiev junta." Suraykin himself asked the Minister to such artists on posters and tickets to their concert certainly indicated that they act in support of the "bloody euromaidan" and support the ideology of "Ukrainian Nazis."
Market Leader, 7/4/2015

On Russian television in 2018 may be a new documentary series about the historical events of the end of 1917, timed to coincide with the centenary of the October Revolution. As conceived by the founders of the new project, the modern technology of filmmaking and new archival data about that tragic page of national history will attract the attention of young people to study it. Chairman of the Central Committee of the party "Communist Russia" Maxim Suraykin told "Izvestia" that the necessary means for the filming will be collected through crowdfunding (national funding).
News, 7/10/2015

We are the only party of the opposition, which aims to take over the country and is not afraid to talk about it. Even Zhirinovsky stopped talking about how to take control of the country in their hands. We speak openly seek to take power in Russia to change the socio-economic formation, to return to the socialist system, to restore the Soviet power, socialism, the Soviet Union. In history there are many examples of bloodless revolutions, and we see just such a scenario. But many people ask me what is my hairpin to tie a Kalashnikov assault rifle, to which I reply that it symbolizes the fighting spirit.
niann.ru , 09/20/2015

Suraykin noted that "the Communists of Russia" - a party of "principled Communists, Stalinists" who respected Stalin. "We proceed from the fact that Stalinism - is not a vulgar notion that the capitalist press was trying to drive voters in mind that it is repression," - he stressed.
According Suraykin, the image of Stalin do not scare, but rather to attract voters sympathetic to communist ideas.
TASS, 04.18.2016

"We demand that the leadership of the ROC to disclose information about the cost of travel of Patriarch Kirill and the sources of their income ... If it was budget, it should pay attention to the Accounts Chamber of the Russian Federation", - said the leader of "Communists of Russia" Maxim Suraykin.
If this were parishioners and entrepreneurs-benefactors, instead of financing "such exotic trips Church could send them to do charitable deeds and help the disadvantaged", - he said.
Informer, 02.28.2016

A similar situation in "Communist Russia", borrowed funds from which last year accounted for 90% of the budget: they borrowed 6.9 million rubles. from party leader Maxim Suraykin and 9.6 million rub.- the head of department of the Smolensk Dmitry Dobrovolsky. "Do we have the oligarchs do not take the money, and I therefore companions to borrow under its guarantees from banks, sell the property and give the party -. Said the" b "Maxim Suraykin.- I had three cars, I sold them for financing parties received government funding. - refund the money. "
Kommersant, 06.17.2016

The party leadership Maxim Suraykin also asks Attorney General to establish the identity of the author of the game, to bring him to justice for the desecration of the memory of Vladimir Ilyich Lenin.
However, as found out the correspondent of "defectors," the game "What happened to Lenin in the morgue," developed by Sergey Zanin from Bulanga Games, and is sold in the App Store application on the price of 229 rubles.
Defector, 20/06/2016