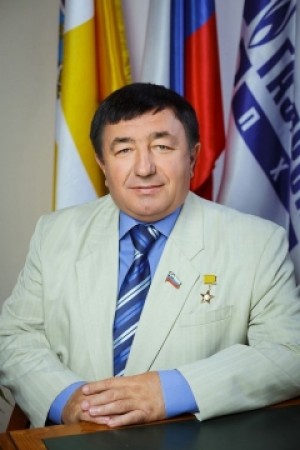 From September 1968 to June 1971 - cadet of the Sevastopol Higher Marine School (received the specialty "Electromechanics - diesel electrical equipment"). From January 1971 to February 1974 he served in the Armed Forces of the USSR (Estonia, Võru).

Since 1974 he worked as the head of the sports and technical club of the Shpakovo district committee of the DOSAAF Stavropol Territory. In 1978 he received the title of master of sports in motocross.

In 1987 he was appointed deputy director of the motor transport enterprise "Verkhnerusskoe" Shpakovsky district.

In 1989 he graduated from the Voronezh Agricultural Institute. K.D. Glinka; In 1996. Moscow Law Institute of the Ministry of Internal Affairs; In 2006 North Caucasus State Technical University; Doctor of Technical Sciences (2007).

In November 1990, he headed the Limited Liability Company Industrial in Stavropol. From September 1998, he held the post of the head of the representative office of the Krasnoyarsk Territory administration in the Stavropol Territory.

In 2006, he underwent further training at the International Institute for East-West Cooperation (Holland-Norway) in the field of "New technologies in the gas sector." Financial Management: International Accounting and Financial Reporting Standards. "

Since March 2008 - Head of the Stavropol Office of Emergency Repair and Well Workover - a subsidiary of OOO Gazprom UGS OAO Gazprom.

In March 2007 he was elected to the State Duma of the Stavropol Territory. He is a member of the Duma committee on industry, energy, construction and housing and communal services.

December 4, 2011 was elected to the Duma of the Stavropol Territory of the fifth convocation in Shpakovo constituency N25.

Member of the faction of the All-Russia political party "United Russia".

President of the public organization "Federation of Automobile Sports of the Stavropol Territory".

He participated in the peacekeeping mission in the North Caucasus and helped liberate 198 captured soldiers, 30 of them personally.

Information about the previous conviction:

The Order of Peter the Great, the sign "Platinum Order", "The Honorable Quality of Stavropol", medals: Stavropol Territory "For Valiant Labor" of the 3rd degree, "For Services to the Stavropol Territory", Central Council of ROSTO "The First Three Times Hero of the Soviet Union AI. Pokryshkin ", the commandant's office of the Chechen Republic" For Combat Commonwealth ", was awarded the title" The Best Worker of the Fuel and Energy Complex of the Stavropol Territory ".

Married, has a son.

It is about incomprehensible actions during the started election campaign with permission and with the participation of a number of officials of the Shpakovsky district. Among the candidates for the Duma of the Stavropol Territory in the electoral district number 25 from the party "United Russia" registered the head of the Pelagiadsky village council Gubanov Viktor Petrovich. In the same district, the acting deputy of the Duma of the Stavropol Territory is registered as a single-member again, Pelagiada Chursinov Sergey Konstantinovich.

As they say, they have the same right to this. But for some reason, the entire administrative resource of the first persons of the district is aimed at supporting Chursinov, who because of his past (who was imprisoned for embezzlement in a large amount for more than 6 years) was excluded from the party list of United Russia for the elections to the Duma of the region. Why does he not express any suspicion about the obvious lie on his part after he was detained in the jail of the Moscow Law Institute of the Ministry of Internal Affairs of Russia?

Chursinov S.K. Is engaged in carrying out so-called "charitable actions". Practice is bribing potential voters. It comes to ridiculous, in the village Kazinka was distributed sausage, with calls to vote for Chursinov. People staged a crush, several people suffered. In addition, campaign meetings repeatedly gave money to children (one thousand rubles each), asking them to persuade parents to vote for Chursin.

According to Chursinov's pre-election autobiography, it's just a genius, and we know that he even received a questionable certificate about secondary education with the help of the head of the district Tarabykina LV, which received a wide public response in the district, and many of which are still Remember.

And so this person with discrediting facts in the biography, it is not clear with what kind of education, the pseudo-scholar and the swindler are cherished and deified by the district chiefs in every way, they let him distribute leaflets without the publisher's output, hang out the materials on the buildings of the district administration, schools, kindergartens, hospitals etc. The whole area in the images of the idol of local officials. For him, virtually every other day, meetings are organized with the voters of the district.

About Gubanov - the candidate from the "United Russia", - neither leaflets, nor words, nor deeds. Voters do not know anything about this candidate either by sleep or spirit.

There are persistent rumors that there could not have been without the big money that Chursinov had brought to Moscow. Since he often boasts that everywhere, including Moscow, everything is seized and allegedly Moscow has given in to his candidacy. It turns out that our "beloved" party does not need such a candidate and that's right, but a single-member please, we have nothing to do with it.

Among other things, on October 28, 2011, as a bolt from the blue, the district newspaper "Nasha Zhizn" reported that Mr. Chursinov was awarded the title of honorary citizen of the Shpakovsky district. Residents of the area were shocked. For what kind of merit?

There are no laws for Chursinov, he always has doors open. He is the landlord in the district, the district bosses are low in his head, from whom there is an unofficial ubiquitous attitude to vote only for Chursinov.

"... After each of my treatment, the illegal actions of the criminal were followed, including the neighbor-the scumbag from Kadatsky, who had a drug transshipment base, and the drug business flourished in my area. The gang was engaged in this criminal business: employees of drug control, employees of Shpakovsky Regional Department of Internal Affairs (precinct Surazhin), deputy of the regional Duma Chursinov - previously convicted. It happened next to the village administration and the police stronghold.

I prevented them and witnessed their crimes. I was thrown out of my house by scumbags and employees of the Shpakovsky district police department. Captain Dobrynin insisted that I sell my house. I was intimidated, threatened, the local Surazhin let me down as a psychiatric insolvency, as soon as I started talking about drugs, while I was working at the district hospital as a defectologist next to a psychiatrist. Appealed to Marchenko P.P. repeatedly. His assistant, Boyko, at a personal reception shouted: "They will give you a certificate from psychiatry, from narcology, they will close you!" Soon after that, Chursinov and Marchenko put Marchenko's niece (Polyakov) head of the city of Mikhailovsk, two years later they started a criminal case against Polyakov. In December 2013, a criminal case was filed against Gubanov, who was also appointed by Chursinov first in Pelagiada as head, building a recreation center for himself during the stay of Gubanov (there was nothing done for the village). Near the recreation base were built two-story houses to the district prosecutor Anisimov and the chairman of the district court Criulina. At this time, the base is transferred to a frontman and Chursinov sells it. Why is he allowed to cash in again? Circumstance in drug control, where my application was not even accepted in 2010, did not go to the scene of the crime (Kadatsky was given drugs), pressed as a criminal (was at a reception with Captain Karpia).

In Chursinov, high-ranking patrons, one of them - an employee of the FSB of Moscow - Uvarov A.V. Therefore Chursinov reigns here with purchased formations from the certificate to the doctor of technical sciences. Next to him, comfortably and calmly, and law enforcement officers. We learned about such a patron, as Uvarov, after an accident in the village in the spring of 2013 (Appendix 6), to which he became a party. As a result, the child was buried. "

From the anti-corruption declaration of 2015, the deputy of the Duma of the Stavropol Territory V convocation Chursinov Sergey Konstantinovich, it should be:

Car of the automobile, GAZ 21

According to the information of the Central Election Commission of the Russian Federation, when providing data on the candidate for the election of deputies of the Duma of the Stavropol Territory of the sixth convocation, Sergei Konstantinovich Chursinov, information was recorded on previous convictions -

In Stavropol Krai, two self-promoted candidates won elections. According to the latest calculations, they went to the regional Duma. They were Alexei Nazarenko and Sergei Chursinov. Candidates were nominated in the Blagodarniy and Shpakovsky Districts. In occasion of one of self-nominees on the Internet the real polemic has burst. Citizens noted that on the ballots The criminal records of Sergei Chursinov are indicated. In the past, he was attracted to several articles, but now the convictions are extinguished.