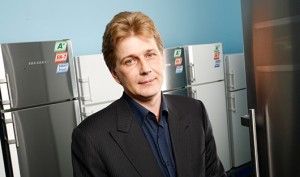 In 1994 he graduated from the Moscow Aviation Institute, specialty "engineer - a systems flight tests."

In 1993, the refrigerators sold in the shop "Light" in one of the sleeping areas of Moscow.

In 1999 he started at "Adeal.Ru" the first online showcase that reflected the range of his company.

In 2003, the registration holodilnik.ru. By that time already had 9 shops, it has become an official representative of almost all major manufacturers, including LG, Liebherr, Electrolux and others.

In 2006, he worked in the company "Yandex" in the position of media planners (the person working with the advertising on the site).

At the end of 2014 the company took ninth place in the ranking of the most expensive Russian Internet companies according to Forbes - experts have estimated it at $ 380 million.

He is fond of internet, cars and aircraft. Married. Son of 20 years. Lives and works in Solnechnogorsk district of Moscow region.

Domain "Holodilnik.ru" at that time was not free, it has bought cybersquatters. And we bought the domain name cybersquatters it in 1999 for five thousand dollars.

The founder of the largest online shop of household appliances "Holodilnik.ru" Valery Kovalev intends to sell its stake in the company is looking for investors and potential buyers. This Forbes said an investment banker who is aware of the sale, and confirmed himself Kovalev.

Two years on Rusbase.com website at online appliance store Holodilnik.ru hanging information that the company has invested venture capital fund "Equity Media" April 15, 2013. This information could appear after the note you that day wrote "Kommersant". It was discussed that the co-owner of one of the largest online retailers in 2012 became the Fund in exchange for a minority stake, he had to carry out a large-scale advertising campaign cost 300-450 million dollars.

After two and a half years, it was found that the transaction was not. "Kommersant" talked to the press service, which, according to the owner and founder of Holodilnik.ru Valeria Kovaleva, the company simply does not.

Venture fund "Equity Media" according Rusbase founded in 2012, instead of the company's website contains the above-mentioned article from 2013, and the only investment fund for information on the same page - Holodilnik.ru.

In Britain such auditing and consulting firm - called the Ernst & Young (EY), one of the largest and most prestigious in the world. It was she who in 2014 was the financial and tax proceedings of the "Edil-Import" and other companies within the group. This confidential report almost a hundred pages was drawn up in order to attract potential investors Valery Kovalev, but rather their scared.

Take, for example, fictitious costs, which "Edil-Import" allegedly paid to its "technical" companies, then getting a tax deduction. Just for this, the auditors counted only two years and a little company owes the government 549 million rubles. Another 588 million rubles owner of online store heated budget for the salaries of gray. Part of the cash payments (interest on loans, the fee for the installation of equipment, etc.), "Edil-Import" also reflected in its financial statements. These unaccounted money cashed with the help of financial transactions between the group companies.

And another interesting thing the auditors found in "Holodilnik.ru" - its EBITDA. This is such an analytical index which is equal to the volume of earnings before interest expense, taxes and amortization. So, "taking into account - as stated in the EY report - corrections suggested by the results of financial and tax expertise, EBITDA of indicator in each of the periods is negative and amounted to (125.3) million rubles.(1.59% of sales) in 2012, (43.7) million rubles. (0.44%) in 2013 and (97.4) million rubles. (3.76%) in 1kv14 ".

That is, it turns out, even before paying meager state taxes online store actually worked in a minus. On March 31, 2014 at the seemingly impressive speed net debt exceeded 2.3 billion rubles.

According to SPARC system, on the basis of the company's 2015 profit exceeded the debt about 100 times. Are collateralized by the goods in the warehouse, but he was received on credit (only already have vendors).

In December - January of this year on the "Edil-Import" was opened just two executive production - bailiffs trying to recover from the company, because she has to pay by a court decision, but does not seek to do so voluntarily. And if the first duty evasion is still possible to understand (still in arrears 422.8 million rubles, according to SCREEN, a considerable amount), the failure to pay the registration fee of 300 rubles is puzzling. Is the founder of "Holodilnik.ru" was found not three hundred million or even thousands, but simply rubles to save the reputation of residues?

Bribes in the audit report are noted in a separate column Company has been so neglected, that all the property that somehow belonged to the store was in a long-term lease.

At a certain Internet service of Yandex.Market TreydServis company was registered as the owner of online store December 12, 2016. Only here the day before bailiffs, just had to write off a large amount from the accounts of Edil-Import. Thus, Valery Kovalev not gone out of business, and fled in disgrace from debts and criminal liability. Because now, in Edil-Import officially no debt. According to estimates of experts, a total of Valery Kovalev should state 1,220,850,000 rubles.

A few weeks ago, "Holodilnik.ru" suddenly, without any loud announcements in the media was replaced by the owner. Instead of "Edil-Import", a co-founder of which was familiar to the publications in "Forbes" businessman Valery Kovalev, the owner was before (and even today) the unknown Ltd. "TreydServis" as unknown Vladimir Rieger.

One of the most expensive Russian Internet companies, two years ago, estimated the experts of the "Forbes" at $ 380 million, was in the company's ownership, revenues and whose income in 2015 was, according to the SCREEN 0 rubles 0 kopecks (and this is - more success: 2014 "TreydServis" generally met with a loss).