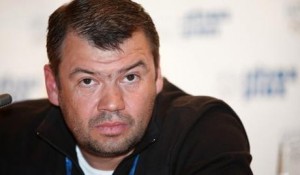 In 1995 he graduated from the Moscow Financial Institute (IFI) and became the acting Chairman of the National Investment Bank, having worked in this post until 1997.

In 1998, as Deputy Director-General, he was in charge of exports "Kuzbassrazrezuglja" - the company that acquired the Iskander Makhmudov, Sergei Rodionov, a senior partner Bokarev. In the same year he led the Austrian company "Krutreyd AG" (the main beneficiary - Iskander Makhmudov).

JSC "Ural Mining and Metallurgical Company" became a member of the Board of Directors since 1999.

Since 2003 - member of the Board of Directors of ZAO "Transmashholding" and OOO "UMMC-Holding".

In 2004, Mahmudov Bokarev and unite disparate engineering plants in "Transmashholding".

Since 2004, member of the Board of Directors of JSC "Rosterminalugol".

Since the autumn of 2004 and 2006, together with Makhmudov owned 50% shares of "Rodionov Publishing House."

In mid-March 2007, he signed with Aman Tuleyev agreement on social and economic cooperation, promising to give the national projects on almost 300 million rubles.

From 2007 to March 2010 - President of the Federation of skiing and snowboarding Russia.

"Transmashholding" became chairman of the board of directors in 2008.

In 2008-2009, the chairman of the Interregional "Federation Russian billiards" public organization.

In October 2010, together with Makhmudov extended a right of ownership of 25% of LLC "Aeroexpress" personally for themselves.

In the ranking of the richest Russian businessmen in 2016, according to Forbes, took 79th place with a state 950 million. US dollars.

He is fond of skiing. In 2012 it was registered as a candidate for membership of the Board of the International Federation of Ski (FIS).

I bought for the fees of the national team hotel for the Austrian resort of Schladming.

In July 2008, several individuals filed in Krasnogorsk City Court of Moscow region the claim, including the defendants in that means, in particular government department "Health complex" Tetkovo "the Russian President Administration. The plaintiffs protest the transfer of this company to the Federal Agency for Management of Federal land property area of 1975700 square meters. m near the village of Petrovo Far. The lawsuit alleges that the right of permanent perpetual use of these lands Manager of the enterprise are illegal.

They say that this story in an attempt to take away land from the Presidential Property Management Department are former senator from the Nenets Autonomous Okrug and "Vodka King" Alexander Sabadash, member Leonid Lebedev, the Federation Council, businessmen Iskander Makhmudov and Andrey Bokarev, who are among a scandalous war for redistribution available they land in the Krasnogorsk district of Moscow region.

The scandal over the Christmas holidays in Courchevel Russian bureaucracy acquires new details. As it turned out, the cottage, where the New Year's holiday spent managing director of President Vladimir Kozhin, was paid by the entrepreneur Andrey Bokarev, implicated in the scandal with a raider attack on the residence near Moscow, Vladimir Putin, the prime minister.

Andrey Bokarev known as the organizer of a number of hostile takeovers of enterprises. The biggest and loudest directed just against the Office of the President. Among the initiators of the attack and the customers for prime land along with Andrei Bokarev called the former senator from Nenets Autonomous Okrug Alexander Sabadash, the Federation Council, Leonid Lebedev, who has known war for the redistribution of land near Moscow. It is unlikely that Kozhin, accepting an invitation to relax in Courchevel Bokarev, he knew nothing about the case, directly affect the interests of his department.

It is known that Iskander Makhmudov owns shares in OAO "KRU" (KRU) and through him - JSC "Transmashholding". Recently, he also engaged in media business, buying a stake in the publishing house Rodionova. They say that it appears on the social events of the governor of the Kemerovo region Aman Tuleyev, as well as in Moscow clubs and the French ski resort of Courchevel. However, no precise information about the mister Mahmudova, nor its exact share of assets controlled by none. They say, for example, that he has a "shadow partner" in the copper business. Judging by the investment memorandum of KRU, at the disposal of Business Guide, this mysterious partner is none other than Andrei Bokarev, previously thought "manager Mahmudov on coal Affairs" (he heads the board of directors KRU). However, the ownership structure of KRU Mr. Bokarev named a co-owner of the business on a par with the very Makhmudov, and on one of the non-public social events called him right owner UMMC.

Most of the songs, and the album itself, Gregory (Leps) has dedicated a great part of humanity. New works "out of your head," "On the bridge", "more will not be", "You came" Leps diluted the good old hits - "Labyrinth", "So what", "Heaven", "I do not love you." One of the songs - "The angel went to the booze" - the singer, by the way, dedicated to his friend - a co-owner and Chairman of the Board of Directors of ZAO "Transmashholding" Andrey Bokarev.

In structure, shareholders are Iskander Makhmudov and Andrey Bokarev junior partner, government contracts fell by tens and hundreds of billions of rubles entire 2014 th. Earlier this year, the two structures "Transmashholding" (TMX) played Tender "life cycle" (thirty years) Moscow Metro for the supply of 832 cars worth 144 billion rubles. The winner was recognized as part of the TMX "Metrovagonmash".December 1, 2014 "Transmashholding" has received another contract from the Metro for the supply of cars and their service within thirty years - worth 130 billion rubles.

Thus, the entire Engineering business Makhmudov, he began to build with the junior partners in 2003, the year received guaranteed funding only on the Moscow metro by 274 billion rubles.

To this must be added another 150 billion rubles, which will receive from TMH won tenders in 2014 for the supply and maintenance of locomotives for Russian Railways in 1008.

After the imposition of sanctions against close to Vladimir Putin, the oligarchs the main recipients of public procurement have become businessmen Iskander Makhmudov and Andrey Bokarev - they pushed the former President Vladimir Putin's judo coach Arkady Rotenberg and have acquired the assets of another president's friend, Gennady Timchenko (former president of judo club "Yawara-Neva" where trained Putin and Rothenberg).

Meanwhile, Mahmudov Bokarev and not just become the most "close to the Kremlin" oligarchs (judging by the volume of public procurement), but were of two defendants in criminal cases.

German criminal case, the investigation which was carried out in Stuttgart, is largely based on the testimony of Jalol Khaydarov (pictured), a former partner of the owners of Ural Mining and Metallurgical Company (UMMC) of Iskander Makhmudov and Andrey Bokarev. Under questioning by Interpol Khaydarov, caught in the disposal of «The Insider» (back translation from German site Rubahin.Org), in the framework of the criminal case investigated in Stuttgart, businessmen have been linked to the Izmaylovo criminal gang, which controlled the coal and aluminum businesses. Illegal profits from the casino, racketeering laundered through legitimate businesses and in particular the UMMC, and then the "common fund" have been created in Germany and Spain. In addition, the gray schemes used to avoid paying taxes on the products of these enterprises.

- Did you know anything about the money laundering activities of the following persons - Michael Cherney, Mahmudov, Deripaska?

- Yes, I know that the above-mentioned persons, as well as Eugen (Eugene) Aschenbrenner, a German citizen Michael Nekrich and Polyakov (his name I do not know), and his son Polyakov Jr. and Andrei Bokarev have been engaged in laundering criminal money through legal Russian structure, for example, through such companies as UMMC - Ural Mining and Metallurgical company, KRU, prokopevskugol and Evraz. There are two streams. The first stream - this is money that is derived from criminal activity Izmailovskaya groups, in particular, from racketeering and other areas of criminal activity, such as gambling and prostitution. These funds, which do not go to the "legitimate flow of money-laundering", and laundered by various illegal means, in particular through the banking sector. The second stream - it is legal money laundering. Grouping Black accumulates money in export earnings <...> I know that the main accumulating company, which transferred the illegal cash were in Liechtenstein. One of the firms, which transferred the money - it Opereyter firm, which worked from 1999 to 2000. I saw a printout of the bank with the seal of the company in the amount, as I recall, 500 million. That was in 1999. I know that in this period Misha Cherny, Iskander Makhmudov, Oleg Deripaska and Anton Malevsky prepared two funds with a view to the full legalization of illegal money flows in Liechtenstein. With regard to Germany - there accumulates a second cash flow of the group. The money accumulated in the accounts of traders, which are mainly issued on the members of this group.

In May 2014, it has completed the sale of 49% stake in the concern "Kalashnikov" co-owner of the Ural Mining and Metallurgical Company "Kuzbassrazrezuglja", "Transmashholding" and "Aeroexpress" billionaire Andrey Bokarev and General Director of "Aeroekspres sa" Alexey Krivoruchko. Andrey Bokarev first of the Forbes list, became co-owner of the company, which produces weapons under the most famous brand in the world of weapons. Concern "Kalashnikov" produces 95% of Russian small arms.

Bokarev and Krivoruchko equally bought an additional issue of shares "Kalashnikov" at 1.3 billion rubles, and another 1.2 billion rubles should be invested in the development of the Group in the coming two years.

One of the key witnesses in the case Izmailovo criminal group, who testified in Spain and Germany, told how illegal money held by the company and Makhmudov Bokarev. According to him, there are two streams. The first stream - this is money that is derived from criminal activity Izmailovskaya groups, in particular, from racketeering, casinos, prostitution, etc. There is also a second cash flow - through European firms UGMK and Kuzbassrazrezuglja hiding income from the sale of natural resources rossiysikh and then shared between the group members. So the leader Anton Izmailovsky Malevsky with Iskander Makhmudov controlled coal trader KRUTrade in Austria, which accumulated all the money from the sale of Russian fuel.

Financial Empire Iskander Makhmudov and Andrey Bokarev, and other co-owners UMMC covers more than 10 European countries, and they chose to settle in France. Here Makhmudov two locks with a few acres of land, one on the Côte d'Azur, the other in the legendary French hunting grounds Xuan Sologne; Andrei Bokarev apartment in Paris and also two houses - two near Saint-Tropez, close to the estate of Iskander Makhmudov. Just south of the Côte d'Azur, near Cannes, there are two other houses UMMC top managers: Igor Kudryashkina and Edward Chukhlebova.

At the same time the media reported that it was through Riostayl and Kuzbasstrans "Iskander Makhmudov and Andrey Bokarev control 90% of the shares of KRU." This suggests a direct connection of top managers Kuzbassrazrezuglja, UMMC and Transmashholding with the underworld.

This link also leads to structures that are emerging at the IPU and developing with Russian Railways.

Names Iskander Makhmudov and Andrey Bokarev inextricably linked to the Izmailovo criminal group, the criminal cases against members of which were instituted in several European countries. Iskander Makhmudov himself also is accused of money laundering in Spain. Capital Iskander Makhmudov and Andrey Bokarev UMMC and other owners appeared in close collaboration with organized crime, with full participation of the leaders of armed groups in the Russian translation schemes and possession of dirty money around the world. Through these schemes were consolidated Ural Mining and Metallurgical Company. Bandit traces can still be found in the structures that hold Kuzbassrazrezuglem in the many businesses that are still operating today in Europe and belong to the UMMC.