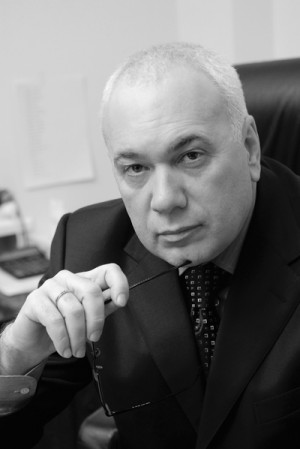 He was a partner of the Moscow law firm "Kremlin Partners", the president of the General Investment Company.
Ltd. is the owner of Global Fashion Group, run by renowned fashion store Riga Palazzo Italia, Ermenegildo Zegna, Richmond and the City Fashion Outlet, as well as the general director of "Baltic aluminum." Also it means the general manager of "Architect 98" (owned part of the demolished at the metro station "Sukharevskaya" buildings).
took participated in raider attacks "Moscow department store."

Dossier:
It is known that around the department store "Moscow" for several years, there is a dispute of shareholders. A. Bralyuk, as a member of the store all proceedings defended the interests of current owners and shareholders OJSC "Department store" Moscow. " Claims to him nominated former shareholders who have become a minority. The conflict was widely covered in the media. The staff of the department store in April this year, even wrote an open letter to President Dmitry Medvedev.
In the same treatment by the department store opened called those who are trying to capture the "Moscow", using proven over the years raider scheme: Grigory Rabinovich and Igor Zhirnokleev Vladimir Grekov. (The one that threatened A. Bralyuku day of the attack). Going into the Board of Directors in 2005, they promised to invest in the development and reconstruction of the department store, but instead of money they took away the store, that is trite stolen, which resulted in substantial material damage to OJSC "Department store" Moscow. " According to the facts GSU police department in Moscow several criminal cases where the defendant is a major V. Grekov, but so far, none of them pending trial never came, and the B. Grekov was not even taken into custody.
And if Vladimir Grekov, as they say in the questionnaire, do not judge (we assume for now), then its business partners raider criminal experience pretty decent. Igor Zhirnokleev - one of the leaders of the Taganka OPG at the Interior Ministry card files held by the nickname "Fat". Grigory Rabinovich, a raider, was held on two criminal cases. In 2000, according to the article. 199.ch.2. in St. Petersburg. After 5 years in Moscow, according to the article. 159.ch.4. for fraud. Two years Rabinovich was in federal search (search case number 10529). Then he disappeared in Riga.
And he returned. However, it is now looking for the police in Latvia. Known fact a criminal case number 12814006109 in respect of GL Rabinowitz Prosecutor's Office of the Republic of Latvia on investigation of financial and economic crimes.
The department believes that all actions aimed at minority to becoming the head of department, to withdraw all lawsuits now the current administration and stop the already excited criminal cases in the GSU police department in Moscow. With the same purpose, in October last year with the filing of Mr. Rabinowitz was a criminal case against the current General Director of "Department store" Moscow "D. Ulianitsky.
With regard to the arbitration proceedings, by a strange coincidence, after the assassination of Alexander Bralyuka, the case of Mr. Rabinovitch and his friends went somewhat better. It must be admitted that the deceased was a strong and qualified lawyer. And if only hypothetically (of course, the matter of the investigation - to build a version of) what those customers were killing one described above, partly they have achieved their goal and punched a hole in the defense of the legitimate interests of "department store" Moscow ".
At the moment, the legal component of the dispute over the "department store" Moscow "reached its climax. In March, at the meeting of shareholders of lime, which took place in a cafe in Novinsky Passage (on the basis of the documents submitted in MIFNS Russia N 46 in Moscow), Rabinovich, appointed director of "Department store" Moscow "his cousin M. Barsky. Several days later, officers Economic Crimes Moscow Police detain her in the room of the Don branch of the Savings Bank of the Russian Federation, where she tried to gain access to revenue department ... Now Rabinovich at intervals twice a week registers a loved one as General Director of OJSC "Department store" Moscow " . And the funny thing is that MIFNS Russia N 46 in Moscow regularly registers! And every time the inspection staff are grounds to register a new director within the existing legislation of the Russian Federation! And despite the fact that the existing Charter of OJSC "Department store" Moscow ", general director is appointed solely by the general meeting of shareholders for a period of five years. But no one in this 46 inspections focus not want to see.
Stringer, 15.05.2009

General Director of OJSC "Department store" Moscow "," Dmitry Ulianitsky, arrested on suspicion of large-scale fraud with shares of department store (about his case "b" said 31 and 30 October), yesterday was released from custody. Mr. Ulianitsky argues that the evidence against him had been created artificially. The investigation says that going out with the suspect's arrest, the court now would be premature.
Dmitry Ulianitsky released yesterday morning. According to him, an important role in changing the measure of restraint he has played his position, which convinced the investigation. "The fact that I was convincing - it is a fact," - said "Kommersant" entrepreneur. In this case, the businessman confirmed that a defendant in a criminal case of fraud. "But instituted it is not against me, as written media, but in fact stolen from company AS Capital Department Store, headed by Grigory Rabinovich, more than 100 million rubles, "- added Mr. Ulianitsky. "During the interrogation and confrontation, which was held from Rabinovich, I have an investigator that half of the documents presented to them (on the transaction to purchase shares of" Moscow. "-" B ") falsified, - the businessman said. - It could be seen with the naked eye, in particular fixed date. Moreover, addressing a statement to law enforcement, his representatives said the movement of funds in my financial account in the Baltic banks in only one direction, thereby creating the appearance of payment. And the fact that on the same day the money went back Rabinowitz hid. "Mr. Ulianitsky claims that his opponents" have tried to artificially create evidence "against him" in order to capture the store. "And said that the investigation was initially misled . Why is it still detained for two days, he does not know: "I'm no one explained anything given to sign the protocol, and all - was released."
"Kommersant", 01.11.2008

Senior investigator of the investigative unit at the Research Affairs of the Russian Federation in the Central Federal District Andrei Ilyin, did not conceal his warm relations with Mr. Rabinovitch, for several months performing all illegal actions and wishes of his Uzbek friend, the head of GUS in Moscow Police Major-General Justice, Ivan Glukhov , the Office which hampered an objective investigation of crimes committed by Vladimir Grekov and other improvised G. Rabinovich, Ostankino district court judge AY Lozhkomoev being in a solid mind and clear memory, who took an illegal decision to arrest the shares and the building department store "Moscow", and most importantly, knowing full well that makes the head MIFNS Russia N 46 in Moscow IV Vishnjakova and her valiant employee Hasanov Angela Abuzarovna, Angatkina and Natalia - Nadezhda Koroleva, punctually recording Rabinovich General Director of OJSC "Department store" Moscow ", thereby" selflessly "pouring oil on the fire in a dispute entities.
Compromat.ru, 15.05.2009

The owners of the store are in conflict for many years. The party, which represents the interests of another former general director - Grigory Rabinovich, holding contests in 2006, an additional issue, which resulted in the proportion of eight shareholders, who owned 79%, range up to 1.5%, while the share of the then director general Ulianitsky increased from 9.97 to 95 %.
Vedomosti.ru, 06.09.2012

In December 2010, the Moscow Arbitration Court at the suit of an individual entrepreneur Larysa Zharehinoy recognized department store "Moscow" bankrupt and opened bankruptcy proceedings.Total debt of "Moscow." - More than 1.3 billion rubles, said Grigory Rabinovich (before the introduction of bankruptcy proceedings has been the CEO of a department store). The largest creditor was the Latvian Parex banka. He gave OJSC "Department store" Moscow "and its related companies loans totaling € 24.5 million received as collateral building department.
Vedomosti, 04.10.2012

The publication stresses that the leader of organized crime groups "Taganskaya" is Igor Zhirnokleev who often resorted to violent means to achieve their goals. It controls several companies.Another one of the leaders of the group, Grigory Rabinovich, specializes in financial fraud. He has repeatedly been accused of tax fraud and other economic crimes.
http://noticia.ru/ , of 04.28.2015
Recently, Valery Rashkin seem to come up with another way to finance their activities - criminal protection racket business in Moscow. As you know, in the spring deputy on behalf of the Communist Party sent a request to the Prosecutor General's Office and even the Supreme Court on the legality of the demolition of the Metropolitan Municipality of trade pavilions recognized samostroem, although initially it was clear that everything was done according to the law. Rumor has it that at this point communist Rashkin defended primarily businessmen such as Grigory Rabinovich, which is associated with the Taganka criminal group, Alan Asia associated with the Solntsevo, brother "King Chirkizona" Fazil Izmailov and a number of other equally odious personalities.
Email "CENTURY" newspaper, 18.07.2016

Among the co-owners of the business pavilion is many of those whose names were mentioned in the reports and criminal way or another linked to organized crime. "Vedomosti" found out that, for example, retail space over the metro station "Sukharevskaya" were built in the early 1990s and owned by "Architect-98." The owner of the company is Marat Yanbukhtin and General Director - Grigory Rabinovich, participant loud corporate conflict around the department store "Moscow".
In 2014, the Spanish media have published information that Rabinovich may be related to "Taganka" OPG. Demolished in the superstructure area over the "Sukharevskaya" were pledged with VTB 24 on a loan of 75 million rubles in 2009. In 2011, the company has ceased to repay the loan, and in December 2015, when the City Hall began to send letters samostroevtsam to demolish, "Architect 98" filed for bankruptcy.
http://matveychev-oleg.livejournal.com/ , 19/02/2016

About "Tagansky" group in Moscow now speak a little, but "Criminal Russia" published in the spring of 2015 for its readers an exclusive investigation on her. The active members of the gang, including Igor Zhirnokleev Grigory Rabinovich and Alexander Romanov, belong to large, profitable companies of various directions. Most controlled "Tagansky", "businessmen" companies are located in Moscow and engaged in various activities, from trade and security to the production of chemicals and research and development in the field of natural sciences and engineering. A total of 26, although, according to the "card index", Grigory Rabinovich is a CEO of several companies, and co-owner Igor Zhirnokleev 5 firms. The third known "Tagansky" leader Alexander Romanov in 2013 during a special operation had been detained in Mallorca and still remains in custody. Russian mafiosi accused by Spanish authorities in the leadership of organized crime groups, falsification of commercial documents, laundering of proceeds of crime in the Russian manner, and enterprises raider attacks followed a fictitious bankruptcy.
Kompromat1.info, 20.09.2016